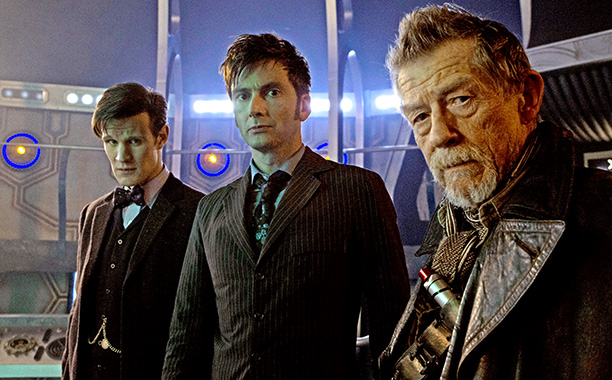 While I have really dug the 50 years of Doctor Who for all its incredible stories and cheap effects, I’ve never really dug the reunion-style anniversary specials. Sure, it’s kind of cool to see multiple iterations of the iconic space-travelling Doctor in the same episode, but the stories were hardly the highlights of the series. The Three Doctors pretty much had William Hartnell wheeled out for a few lines and The Five Doctors edited in footage of Tom Baker from an unfinished episode. The plots were essentially written around the possibility of rounding up as many Doctor actors as possible. So I was a little hesitant about this 50th anniversary which brought together Matt Smith and David Tennant. However, a strong script and a great guest spot by John Hurt as the “secret doctor” manage to make this a superb special that rises above the others.

Similar to the other anniversary specials, three generations of the time-traveling Doctor are thrown together by a key event. The center of the story is a forgotten version of the Doctor (John Hurt) during the cataclysmic event known as the Time War. The war in which the Daleks and the Time Lords battle for the fate of time and space was brought to a close when the Doctor activates the Time Lock, trapping the Daleks and Time Lords forever. However, before he pushes the button, the entity of Bad Wolf (Billie Piper) opens a portal in time to witness his future incarnations if he goes through with his plan.

The old and worn Doctor happens upon both the 10th (David Tennant) and 11th (Matt Smith) versions of himself in different time periods. The 11th Doctor is trying to solve the mystery of the missing subjects of paintings in modern London while the 10th Doctor is in the 1500’s dealing with a Zygon threat. The two incidents are actually connected which brings together both of them as well as the forgotten Time War Doctor. But the solution to this Zygon threat may also hold the key for rewriting the history of the Time War.

This special manages to succeed as both a solid story and a reunion of sorts. The characters are not just trotted out for the sake of seeing them again as there is plenty going on for every character to shine. Guest star John Hurt really brings his A-game here completely inhabiting the role of grumpy, weary Doctor tired and worn from the Time War. His chemistry with the goofy David Tennant and the exuberant Matt Smith was priceless. And, thankfully, the majority of the film has them all working together to not only solve a common problem, but discover more about themselves.

There’s a brilliant moment when John Hurt asks the two Doctors if they remember how many children there were on Gallifrey before he activated the Time Lock. David Tennant remembers the exact number while Matt Smith has forgotten it over time. You really get a sense of how the characters have changed and what they think of themselves for the choices they’ve made in the past (even though we’re really only meeting one of them for the first time). It’s a solid build-up for the grand climax that not only reshapes the lore of Doctor Who, but also gives a chance for the grandest reunion of them all with all incarnations of the Doctor involved. There is even a brief glimpse of the next Doctor and a surprising cameo role by one of the notable actors of the series.

Special effects wise, this is the biggest production I’ve seen out of the series to date. Just the brief battle scenes of the Time War on Gallifrey are unbelievably epic in scale and detail. Large fleets of starships bombard the planet, troops defend the planet with laser rifles and the Daleks go down in glorious explosions.

The main villains of this special, the Zygons, were a bold choice given their strange designs. Thankfully, they come off fearsome thanks to some top-notch practical and CGI effects. All the sets from the art gallery to the historic countryside look fantastic. There are too many memorable shots to pick just one as a favorite. The opening scene where the TARDIS is airlifted to the scene, the moment when all three Doctors meet, the stand-off in an underground bunker and even the expected shot of all 12 doctors together look spectacular.

Showrunner Steven Moffat has managed to achieved what I never thought I’d see: a Doctor Who anniversary special that may be the best of the entire franchise. It continues the story of the character, rewrites the timeline, takes notable risks and is just a solidly written piece. Usually with Doctor Who, I try to look past much of its shortcomings or ironically go along with them to be entertained. Day of the Doctor is genuinely enjoyable all the way through. As a fan of the show, this is the best one could hope for from a 50th anniversary special.

G.I. Joe was rarely a franchise I didn’t view through campy eyes. I grew up with the cartoons and came...

Remember fun? This question is literally asked in Space Jam: A New Legacy, hammering the blunt message that it’s easy...

The Black Widow movie has been so long overdue (both because of the pandemic and Marvel’s crowded forecasting) that everything...

There comes a point in the ninth entry in the Fast & Furious saga when one of the characters questions...