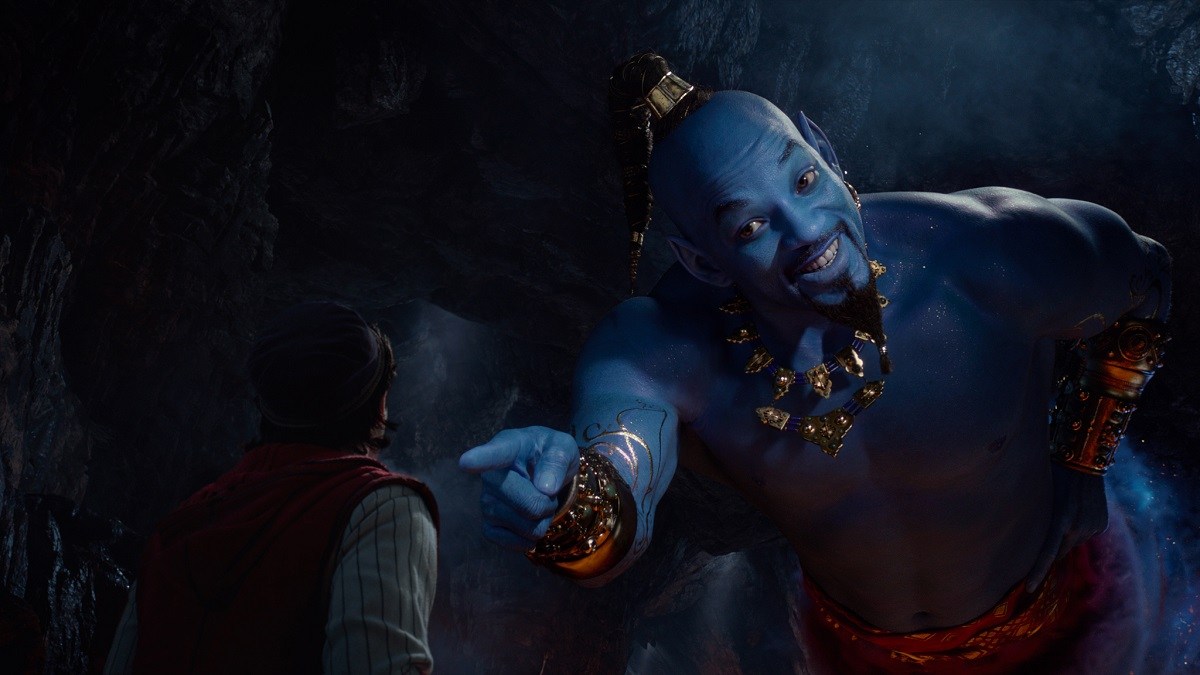 It’d be too easy to look down on Guy Ritchie’s Aladdin as being inferior to the classic 1992 animated film. Of course it’d be inferior. Nobody can top Robin Williams. No amount of computer graphics in live-action can topple the magical wonderment of hand-drawn animation. And nothing could top that catchy music. Thankfully, Ritchie does try to shake the cage of this tiring formula of repeating itself to inject some of his own originality, sparse though it may be.

Though not a major change, Richie’s version does smash some of the events together to give them a different take. We get a better introduction to the street thief Aladdin (Mena Massoud), getting more of that diamond-in-the-rough character before his big chase. Roped into the chase is Princess Jasmine (Naomi Scott), seen more mysterious before realizing who she truly is, both to the audience and Aladdin. Yeah, we know about her royalty, but at least the film tries to add its own mystique to this familiar story.

The two reside in the city of Agrabah, ruled by an aged and concerned Sultan (Navid Negahban), portrayed with more believable frustrations than the bumbling nature of the animated version. Also treated with more realism is the Grand Vizier of Jafar (Marwan Kenzari), more bitter than conniving, deeply desiring to rule over a kingdom he feels is mismanaged politically by the Sultan. His drive is so great he doesn’t even bother slapping on an odd outfit to trick Aladdin into fetching him a magical lamp; his ambitious way with words is enough to convince Aladdin that the magic of a genie can make his love for Jasmine more official.

Okay, so this cast isn’t too shabby, but I’m sure you’re only reading this to know how well the Genie is performed by Will Smith. Yes, he’s still going with the blue look and the manic nature per the live-action development formula. Again, Ritchie makes this casting work a little better by letting Smith bring his own brand of comedy to the picture. A rare version of Smith with goofiness and grinning is a welcome presence to this picture, especially when he’s given more to do with a romance story that grounds him better in reality while raising the appeal of romantic comedy.

Most of the familiar songs are back and they unfortunately don’t shine that bright in this new version. Smith’s take on “A Friend Like Me” and “Prince Ali” are not terrible but are in need of a thicker dose of that Big Willie Style singing. Newer renditions of “A Whole New World” and the opening number are not bad either but they add nothing new. Thankfully, the addition of new songs attributed to Scott shine brightly, giving her far more to do as Jasmine.

Those hoping that the film will distance itself from the Disney classic and adhere closer to the source material will be out of luck. Those expecting merely another reprisal of their favorite nostalgic songs won’t be let down. But as someone who is preparing for the long haul of these many live-action adaptations, there are some signs of life from a picture that finds the right energy and takes this old musical is some interesting directions. But as Disney continues these films, they need to be willing to make more of these left turns.