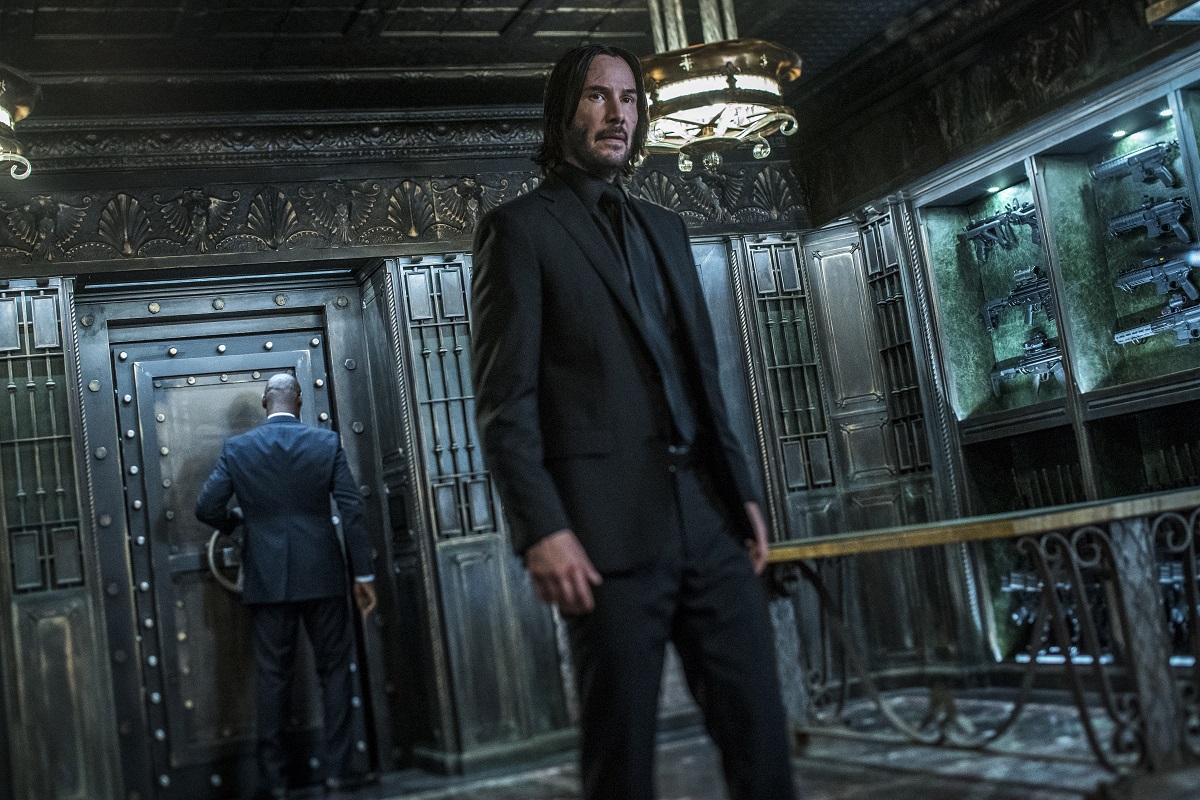 What started out as one man getting revenge for his puppy has turned into one of the most bombastic, vivid, and thrilling trilogies of the decade. One crime overlord remarks how strange this all is that John Wick’s bloody rampage only came about from the death of a puppy. But as Wick remarks, it wasn’t just a puppy, more of the last straw that broke the ex-hitman’s sense of adherence to the underground rules of assassins. In that same sense, the Wick saga isn’t just a series of highly-choreographed fight sequences but a celebration of presenting a gorgeous spectacle of cinema’s best use of violence in a ballet of the brutal. Just like the puppy, it’s just too damn good.

Our story so far: John Wick (Keanu Reeves) is currently on the run from literally the entire world of assassins. He had the chance to be set even but after losing his dog and then having his house destroyed, rules be damned. The underground system is broken and if Wick has to break it, so be it. The price is placed on his head and he goes on another frenetic fight fest to seek safety and continue his crusade against the higher-ups of assassins known as the High Table. But the High Table isn’t content sitting back and letting the criminal sects of The Continental and The Bowery merely stepping back and letting goons have at him.

The High Table sends out the Adjudicator (Asia Kate Dillon), a non-binary accountant of actions. The Adjudicator notes how the likes of Continental manager Winston (Ian McShane), the Bowery King (Laurence Fishburne), and the Russian mafia Director (Anjelica Huston) have been in the presence of Wick when at his dangerous and did nothing, before and after the heftier price tag on his head. And it seems like they’re going to regret it when the High Table literally wants their blood as payment.

While underground politics swirl, Wick finds himself having all the fun in scenes that are far grander, bloodier, and more intense than previous films. It really speaks of how resourceful the character is when he can defend himself in the library with little more than a book to kill an attacking assassin. But, more importantly, he is wounded and needs to seek surgery quick if he hopes to survive. Fortunately, he knows a few allies that will reluctantly help him in his hour of need, as he’s been saving up these I.O.U.s of other criminals by the code of blood of sacrifice. It’ll still cost him in the form of body mutilation, more so than previous chapters, but he believes these are costs worth accepting.

But enough of all that! Let’s just gush now about how beautifully Chad Stahelski can weave these over-the-top sequences of violence with great grit and glee. Wick finds a horse stable and manages to not only protect all the horses from loads of gunfire, but even uses their mighty kicks to cause some damage. He’ll later find himself in a room full of glass and doesn’t shy away from breaking everything in the room, almost as much as a room full of knives where he uses all of them with brilliant throws. But the best sequence by far is when Reeves teams-up with Halle Berry playing another ex-hitman with skills just as tough. Oh, and she has vicious dogs that can lunge, climb walls, and bite out throats and guts. You know Wick has gotta have a crush on a woman who trains dogs to fight back. Still, I’ve gotta point out the other centerpiece of Wick teaming up with Continental concierge Charon (Lance Reddick). Where is Winston during their team-up? Merely having a glass of wine and enjoying the show, much like I was.

Is John Wick little more than an over-the-top series of action sequences with little plot? Perhaps but the very “story” of Wick isn’t as important as its execution. Chapter 3, similar to its predecessors, refuses to toss around exposition and dialogue like candy, choosing its words wisely to be straight to the point. There really doesn’t need to be a lot of explanation for the High Table, The Continental, The Bowery, or The Russian Mafia. The John Wick saga is averse enough in this genre to avoid these pitfalls and sprint towards the best part of these films and polish with great refinement. It’s just a damn good film and does it all with class and absurdity, a master of the violent in a fitted suit.