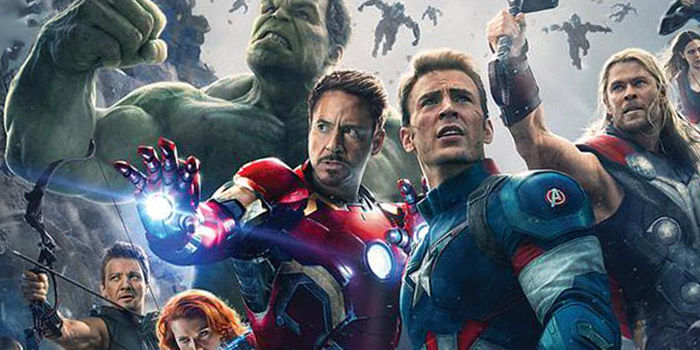 As the grand finale to Marvel’s second phase of their cinematic universe, the Avengers sequel aims to cram as much content as it can to deliver the biggest of bangs. But even at two and a half hours, it’s a picture that feels very cramped for all that it wedges into the script. There’s too many heroes, villains and murderous robots on screen that it becomes a rather complicated juggling act for writer/director Joss Whedon. The good news is that Whedon not only manages to maintain a certain level of balance, but also delivers more character development than I would expect for a superhero ensemble picture.

The Avengers have assembled once more with every returning character accounted for. Tony Stark (Robert Downey Jr.) continues to helm the tech of Iron Man, now more fearful of alien invasions from his previous Avengers mission. Steve Rogers (Chris Evans) as Captain America maintains his noble spirit after dealing with the corruption of SHIELD. Thor (Chris Hemsworth) is just sort of there as the dimensional-traveling warrior, wielding his magic hammer and blithering on about prophecies in his poetic talk. They all carry a little something with them from their previous movies, but it’s the characters without their continuing series that take a bigger chunk of the screen time (and for good reason). Natasha Romanoff/Black Widow (Scarlett Johansson) has developed a relationship with Bruce Banner/The Hulk (Mark Ruffalo), but they’re both frightened of each other and worry about their relationship. But it’s Hawkeye (Jeremy Renner) who steals the movie this time as the slick-talking archer who gets the best lines and most unique life outside saving the world.

On their latest adventure, the group finds themselves combating the evil robot Ultron (voiced by James Spader) that wants to destroy humanity after Stark programmed him to protect it. Though relegated to just a voice, the motion capture performance of Ultron showcases him as more expressive than your usual movie robot bent on destroying planet Earth. This brings about a surprising amount of personality and charisma to a walking, talking machine that wants to kill us all. His philosophy is rather base given how often he talks about it and his method for wiping out the human race is pretty standard. All that intelligence and character ultimately leads to his master plan of chucking a rock at the Earth. Additionally, he build an army of robots to defend his project and give all our heroes something to hit.

In between this simple plot of murderous robots, several new characters and plot lines are introduced. We’re introduced to the Maximoff twins as escaped experiments of HYDRA – known from the comics as Quicksilver (Aaron Taylor-Johnson) and Scarlet Witch (Elizabeth Olsen) – acting as ambiguous superheroes choosing sides. Though they were technically mutants (children of Magneto), there’s not mutants to turn to in this universe so they find themselves very cautious of who to trust. There’s the introduction of Vision (Paul Bettany), Stark’s computer program turned 90’s-looking superhero with the classic cape and painted face. There’s a hefty supply of Easter eggs wedged inside the script in the form of future villains (Andy Serkis as The Claw) and artifacts still on the self (the Infinity Gems to be used by Thanos’ Infinity Gauntlet). And let’s not forget a seemingly endless stream of secondary characters the pop up from Nick Fury to War Machine to Falcon and so on. The only character who seems curiously absent is Loki. He wouldn’t add much of anything to the picture, but at least he would give Thor a little something more to do.

Even with a massive running time, the movie just doesn’t have a lot of time to explore all these areas in between the action. Whereas the first Avengers movie found enough in the script for every character to be involved, the expanded cast makes this picture far too crowded. There are a handful of scenes where Whedon relies far too heavily on exposition dialogue to drive the plot rather than visuals. If the Maximoff twins have a tragic past, why not show those evnets? If the people of New York are angered by the actions of the Avengers, why not give us that scene rather than hear a verbal report?

Several characters are shoved into a corner for many scenes simply because we don’t have time for them. Thankfully, the characters we do focus on the most have engaging arcs and are a thrill to follow. The complicated romance of Black Widow/Hulk and the secret life of Hawkeye are far more interesting than Captain America’s distrust of national security or Iron Man’s concerns for intergalactic insecurity. The big names have had their movies and politely step aside for most of this picture.

As expected for a $200 million picture, the action sequences are loud, detailed and gorgeous. Shot around the world, Whedon picks some great locations for a battle with Hydra or an Iron Man versus Hulk duel. And while he does go for the big moments of destroying buildings and smashing cities, there’s still a sense of heroism and consequence. While Iron Man and the Hulk end up causing a massive amount of damage to an African city, the movie doesn’t shy away from the folly of their ways. There’s still a level of distrust the public has after the events in New York City from the previous big battle. But the Avengers aim to do better with more scenes of them saving those caught in the crossfire from a family in a crumbling villain to a woman’s car toppling off a cliff. It’s a pleasant reminder that these superheroes are more than just powerful warriors that smash bad guys and blow stuff up.

While Avengers: Age of Ultron is rather overstuffed, it still manages to be a solid followup. The character chemistry is all still present and the villains have some wit and grit. Despite the laundry list of developing content to keep these Marvel movies more as serials, it doesn’t take away from being able to enjoy the movie on its own. You don’t have to know all about Thanos, the Infinity Stones, the activities of SHILED or the secret operations of HYDRA to have a great time with the picture. It certainly adds to the enjoyment, but it’s not a requirement.