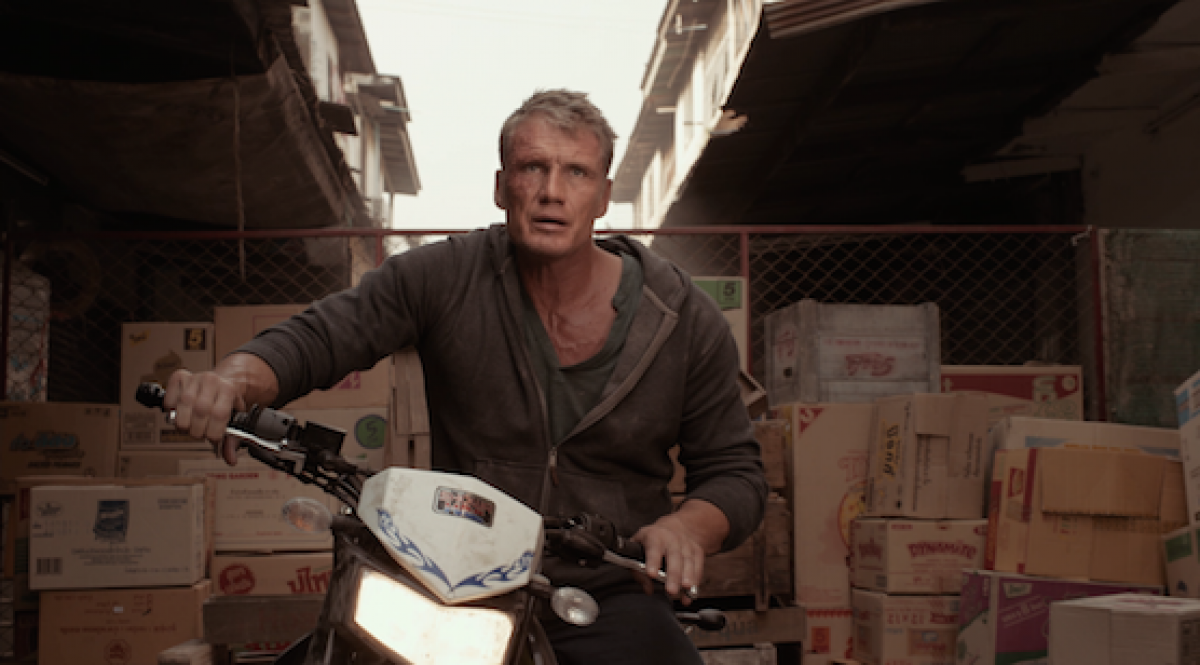 Skin Trade is rather unique in how it attempts to weave a real message about human trafficking into its low-rent action. It may not sound like much the way it picks an easy subject for Dolph Lundgren to become a one-man-army that blows up the bad guys, but it at least brings some attention and a little heart to a very passive action movie. And a certain respectability towards its real subject of painful loss helps make the bland dialogue and poorly edited action mean just a bit more. Sure, I may be grasping at straws here, but can you blame me? Several of these small action pictures destined for the bargain bin tend be so devoid of any type of story or meaning that it’s easy to stomp them to the bottom of the pile. Skin Trade will at least garner some real thoughts before it evaporates from your mind.

Let’s start with the clichés. Dolph Lundgren – looking as big and aged as ever – plays a cop trying to foil a human trafficking operation by Ron Perlman trying to pull off a Russian accent. When Dolph gets too deep, the goons kill his wife and kidnap his daughter in a brutal display of explosions and guns. Tired of playing by the law, Dolph goes rogue to find his daughter and take down the traffickers with his big and bloody vengeance. His travels eventually lead to Thailand (where else for a low-rent action movie?) where he finds himself teaming up with Tony Jaa as another gritty cop willing to go off the books. Jaa dangles a gangster off a balcony to give him information or else he’ll drop him to his death. After the key info is divulged, Jaa drops him anyway and remarks that “negotiations are over.” There are several ridiculous moments such as this that further magnify the shameless 80’s action vibe.

But this leaves the movie with a rather conflicting tone. I wanted to grin at the ridiculousness of its assembly, but was taken aback by the serious perspective on human trafficking. These two sides sometimes clash in scenes that are rather confusing. There’s a moment where a slave girl is forced to have sex with three men on camera by her overlord. Dressed in a schoolgirl outfit, she sits on the bed as the men and grope her body. While this continues, the soundtrack continues to play a seemingly erotic techno track which makes this forced sexual experience feel more like an actual pornography feature. It isn’t until Tony Jaa acting as her boyfriend busts into the room and sprang the trap of guns blazing that the track actually fits the scenario without seeming strange.

So the movie itself can be divided into two varying tones: campy action clichés and serious commentary on the dark world of forced prostitution. The human trafficking subject is treated with a dark and serious degree. The rape and trade scenes are not overdone and there’s a genuine sense of a plight to a very real problem. Most importantly, there’s a sense of loss in the picture that narrowly avoids a revenge movie cliché and turns it into something more powerful.

In terms of action, everything is stylized in a familiar way that is sometimes decent and sometimes laughable. There’s a gun battle a ship yard which at several points twist around into martial arts. It’s weird, but still entertaining to watch. There’s a chase between Dolph Lundgren and Tony Jaa through the Thailand streets with Lundgren on a motorcycle and Jaa on the rooftops. As Jaa pursues, he starts doing a sort of cartwheel over every second hurdle. I never thought a low-rent action picture would make me think about Gymkata again.

The good news is that most of the silliness is somewhat forgivable for a picture with an energy and a soul. For what little character is established, Skin Trade moves at a brisk pace and ends with a title card that fulfills more than the basic public service announcement requirements. When the movie finishes, you’ll have gained a little thrill and a little perspective. You’ll probably forget it days later as there isn’t a memorable shot or scene in all of this, but you probably won’t feel as bad for having watched a better-than-expected action movie stocked with the familiar tropes.