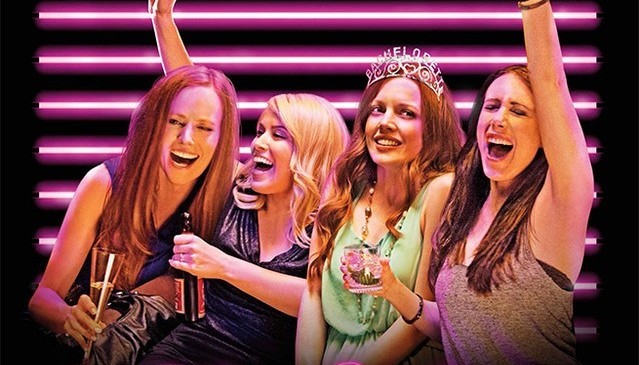 Sometimes a filmmaker can surprise you. Take the writing/directing duo Adam Seltzer and Jason Friedberg for example. Up until now, they’ve only made awful parody films such as ‘Epic Movie’, ‘Disaster Movie’ and ‘Meet the Spartans’. But their latest film, ‘Best Night Ever’, is their first original film. There are no cutaway movie references or pop culture satire gags in sight. I’m impressed as I didn’t think these two could ever conceive a film without relying on making fun of films. And guess what? They’re still the worst filmmakers ever.

Told in the popular found-footage format, ‘Best Night Ever’ follows a bachelorette party bound for Las Vegas. When they arrive, however, a case of stolen credit card info leaves the four girls without a swanky room in the city of lights. Deciding not to let this set back their partying, they check in to a low-grade motel on the bad part of town. It’s then that the movie starts struggling to find things for these characters to do by throwing them into wild scenarios.

At one point they decide to buy cocaine from a valet. The valet then robs them and the girls are forced to find money via strange acts such as mud wrestling. The mud wrestling could’ve been interesting, but it’s entirely cut as it proceeds straight to the bloody aftermath. And then it’s just one forced scene after another including taking drugs they swiped from an ambulance because they literally do not know what to do next. This is a plot so bad even the characters know it.

As for the characters, you care for none of them because they never get proper development. All the ingredients are there as you have an uptight wife with criminal tendencies and a new mom who wants to be a party girl. Those are both great foundations to work from, but they never build to anything. You don’t make us care about characters by just slapping them with traits and then never using them. Without any characters to become attached to on any level, all we’re really watching is a bunch of crazy women running around Las Vegas doing stupid and illegal acts. No story, no character, no great lines; just random acts of stupidity and vulgarity.

The one good thing I can say about the direction is that Seltzer and Friedberg are committed to the found-footage format. They make sure a character is always holding the camera at some point with no weird or out-of-place shots. Everything else is a mess.

For making so many comedy films, Seltzer and Friedberg have zero sense of timing. Towards the end of the film, the girls run afoul of a naked, obese black woman that chases them through a hotel. That type of shock humor only has a lifespan of 30 seconds max. But, no, we follow her for what seems like forever in a chase scene that will not end.

But the worst moment by far is a sequence that lasts over 10 minutes in which the girls dash around Las Vegas fulfilling the bachelorette party scavenger hunt. These scenes are not scripted nor do they have any dialogue as that would detract from the annoying overlaying music. There are some films that feel like they were made just so the celebrities involved would get a chance to travel. It’s clear that these actresses were doing this for a chance to run around Las Vegas like loons and we get to watch them have fun without any acting.

Is it really a surprise that these guys don’t know how to write either? They may have done their best to stay original with the script, but their unfunny nature and terrible ideas remain intact. There is no real story or characters present in this movie. There are components that if properly assembled could make at least a cohesive story, but why use any of that when you can just cram in as many vulgar jokes as possible. Oh, and because they’re women partying, make sure they scream and squeal as much as possible at the top of their lungs.

Also, was I supposed to laugh at the scene where they kidnap the wrong guy who ripped them off, raid his house and then urinate and defecate on his face? Is this what comedy has come to in this day and age? I know some women would like to praise this film for being a raunchy comedy with an all female cast, but do you really want to bestow that progressive title on a picture that involves pooping on people’s faces for revenge? Even ‘The Hangover’, for all its vulgarity, still had some standards. Chalk this up to Seltzer and Friedberg’s inability to write women, characters, gags and comedy movies in general.

This is ground zero for humor. It’s as if an A-bomb of awful went off in this movie leaving nothing but plot-puppet characters dancing around Las Vegas. I know I’ve said this with every film they’ve ever made, but Adam Seltzer and Jason Friedberg need to stop making movies. There is no hope for these two as they’ve been making terrible movies for years and have shown zero sign of improvement. Move over, Ed Wood and Uwe Boll. Seltzer and Friedberg have secured their spot as the worst directors of all time and this being their first original movie ensures that title.