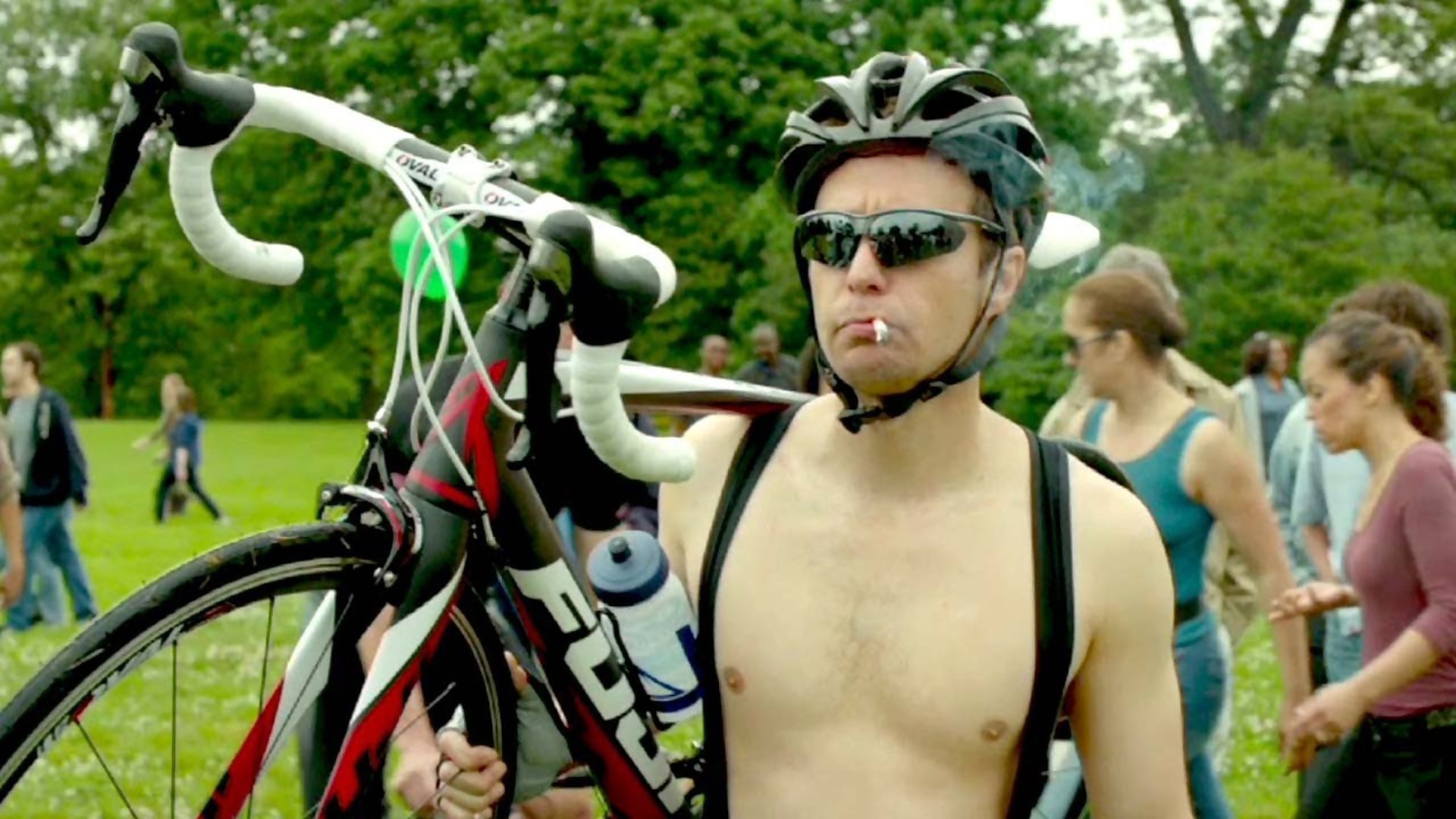 Even great actors can falter in a film if they’re not used properly. Take Sam Rockwell, a fantastic personality who can ooze charisma for any upbeat role. The only roles I could not buy him in are the sad wimp or the aggressive bully. ‘Better Living Through Chemistry’ likes to think he can fill both designations and lets the trainwreck unfold in a terribly hateable script. Sam Rockwell is a great talent, but even he can’t save a comedy so vile and unlikable that’s devoid of almost all humor.

Doug Varney (Sam Rockwell) is the meekly innocent pharmacist in a town packed with jerks. His wife is a neglectful health nut, his son is a school shooting waiting to happen and everybody he knows more or less walks all over him. It isn’t until he meets lonely housewife Elizabeth Roberts (Olivia Wilde) when he actually feels needed and appreciated. Fed up with both their lives leading nowhere with little appreciation, the two have an affair behind closed doors or in a car when presumably nobody is watching.

Then, in a strange jump, Doug decides it would also be fun to start pilfering pills from the pharmacy he runs. I guess he figured that if you’re going to be unfaithful you might as well commit felonies and get high in the process. He also uses these pills to his advantage in order to beat his wife at a bike race and then ravish like never before in the bedroom. He’s also finally able to connect with his son, but only through cussing and causing public property damage with ninja stars.

I know this whole experience should be seen as a warped way for Doug to gain some backbone, but it’s more of the makings of a villain ala Falling Down. You wish you could be happy for Doug, but it’s hard to root for him when he sinks down lower than the awful characters who spit on him. It isn’t long before Doug and Elizabeth decide to off her old man so they can runaway together. By this point you naturally don’t expect the plan to work and look forward to the inevitable downfall of the character.

But guess what? That moment never comes and were instead treated to a happy ending via left-field accidents that resolve everything. Such an ending would imply that we like the character of Doug and want to see everything work out nice for him in the end. It’s a little hard to feel that when the character is committing all these illegal and immoral acts with a devilish sensibility. You’d almost feel sorry for his dark descent if it weren’t for the fact that he got away with everything. Instead, you just end up hating Doug the same way you despise all the other characters. He sinks to their level and succeeds.

I’m still hung up on how he decided to make the massive leap from having an affair to stealing prescription drugs. Maybe if he’d actually fantasized or considered it at one point in the film it would actually make sense. Heck, the film had a perfect opportunity to use his drugged up and party-boy delivery assistant as an inspiration. It wouldn’t make Doug anymore likable with this added in, but it would at least make some sense of his actions.

There are some early moments where I was convinced that this could be an acceptable dark comedy. In a scene similar to ‘One Hour Photo’, Doug explains the various customers of the small town and the secrets he keeps on all of them. That right there would’ve been a great starting point for the story, but it’s rarely taken advantage of in the movie. We’re instead led down a not-so-likable path of drug abuse and wild sex, but not the kind where anybody gets hurt. After all, that would ruin all of Doug’s “fun”.

I know that Geoff Moore and David Posamentier were aiming for dark comedy here, but I fear they have forgotten the comedy part. Every character just ends up becoming so over-the-top in their mean-spirited nature that they all turn into cartoonish villains. These two writers just cannot conceive likable characters with a script like this.

Doug bursts into his anti-social son’s room and gets on his good side not by being a dad, but trying act cool with foul language and encouraging violence. If my dad did that to me when I was 12, I would’ve called the cops on him. Instead, Doug’s kid learns to trust his dad and confess what’s wrong at school. And all it took was some illegal acts of destruction to get on his good side.

What’s really disheartening is that all these characters are so vile that you don’t feel anything for any of them. Then when the movie actually wants you to feel some emotions when the characters are sweet or placed in jeopardy, you couldn’t care less about how things play out. Then you see how things actually play out and you’re pissed at how lazy the writers were with the conclusion. This is one of the few films with an ending so terrible you may want to bolt yourself to the couch to prevent your fist from flying through the screen.

‘Better Living Through Chemistry’ never really delivers on being either a dark comedy or an uplifting tale of gaining confidence. If it weren’t so ridiculous in its plot and motivations, it could almost pass for a drama. But the combining of the two genres for a good-pharmacist-gone-bad story just doesn’t work here. The film has about two or three decent chuckles and maybe one or two moments of satisfying revenge, but nothing more than that.