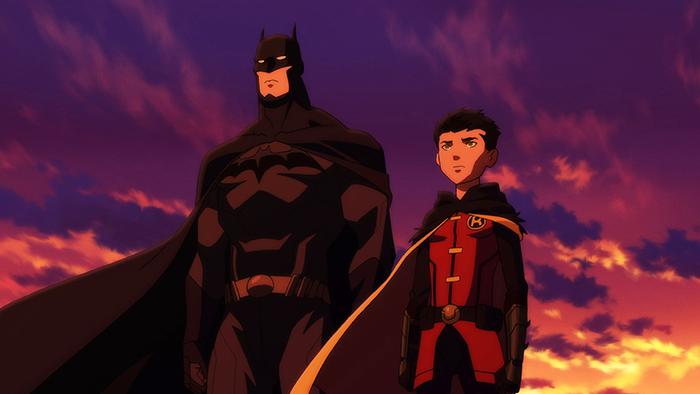 I fear that Warner Brothers may have exhausted their Batman animated movie ideas if they’re now resorting to estranged child plots. Such a concept seems like something more common for a television program in the twilight of its run. It’s a move that one would have to be very brave and very capable of pulling off to make for an entertaining movie. This is not that movie as the whole idea is given a very lukewarm presentation.

Damien Wayne has grown up far from his father Bruce Wayne in the mountain HQ for the League of Assassins. His entire life has been spent on intense warrior training with his mother Talia and his grandfather Ra’s. Terror strikes, however, when the evil Deathstroke descends on the stronghold with his highly-trained minions to destroy the League. When Ra’s is murdered in the scuffle, Damien vows swift revenge for the death of his grandfather. His quest leads him to Gotham City where he finally comes face to face with his father. Naturally, being the dark knight, it isn’t long before Damien takes an interest in the Robin costume and the dynamic duo takes on a father-son relationship.

The two are polar opposites, however, with Damien being more of a killer than a crime fighter. Growing up with assassins, he’s been taught some rather nasty lessons that Bruce must now rectify with his more humane approach to vigilantism. He shows him the ropes by following the trail of clues that leads them to some fights with Killer Croc and a gang of Man Bats. Those fight scenes are decent, but never really ascend past the level of television animation. And the final showdown between the two and Deathstroke is so underwhelming for a fight with swords and martial arts. These three are supposed to be masters of their fighting craft and here they’re pulling out amateur moves and mistakes. This could have been an impressive display and instead it just feels like another uninspired moment.

What’s really so disappointing about the film is the very poor choice in voice talents. None of these voices really fit all that well. I couldn’t buy the emotion of Bruce Wayne, the cruelness of Damien and the evil of Deathstroke. All of the voice acting either feels ill-fitting or phoned in with a dry delivery. The animation looks decent, but does appear to be a step down from Warner Brothers’ previous direct-to-video animations. It has that sort of stylized jerkiness you’d see on ‘Avatar: The Last Airbender’. For television, it looks great. But as an animated film for video, this needs an upgrade. I wasn’t entirely uninvested in the film as there are some great dialogue exchanges between Bruce and Damien as well as some fun lines for Alfred and Nightwing. As a whole, however, I was more distracted by the dip in quality for just about every department. In the canon of these direct-to-video DC Comics movies, this is certainly not a highlight and may be one of the worst they’ve made.