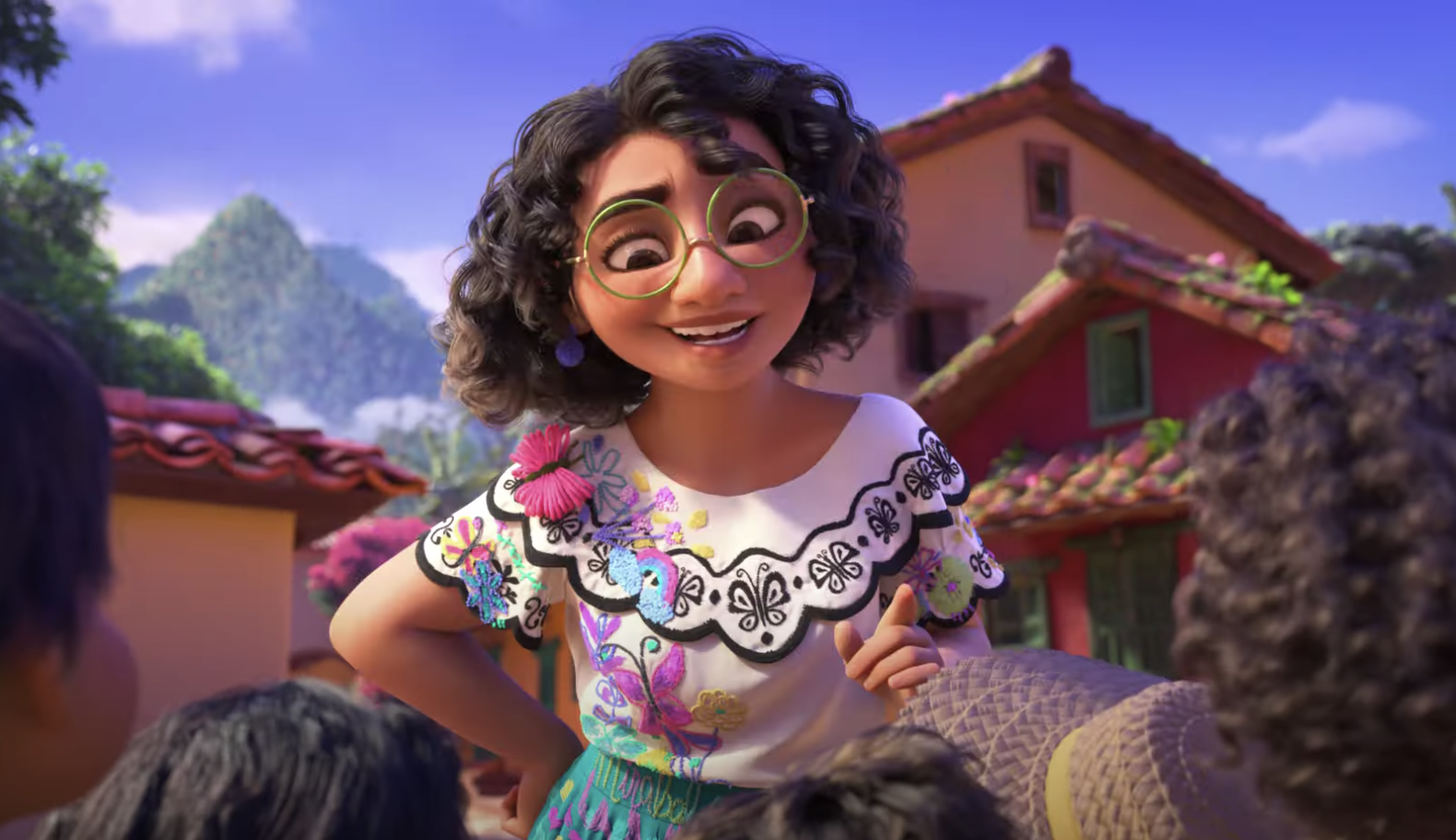 In the same way that Lin-Manuel Miranda’s songs brought life and love to the streets within In The Heights, his magic once more invigorates Disney’s animation. While his previous animation efforts in Moana served as an extra dose of musical charm, he has a story credit on Encanto and his influence feels more present and powerful than ever. His music not only provides an eccentric vigor to this feature but brings out an emotional core, whimsical charm, and a story that bucks the formula by not presenting an apparent villain or a classical princess story.

Consider the central character of Mirabel (Stephanie Beatriz), the underdog of the Madrigal family. Living in a village in Colombia, Mirabel lives in a household that is overflowing with magic. Thanks to a special candle, her entire family has been granted magical abilities. Such astounding abilities include being able to lift buildings with ease and the ability to control the weather. The town is grateful for their talents that make life such a treat. The house itself is also magical with its ability to communicate through flipping tiles and clapping windows. Everything in the house seems magical except Mirabel.

With her chipper attitude and big glasses, Mirabel tries to keep a stiff upper lip despite being the only member of the family without powers. She tries not to let it bother her but how could it not? When you occupy a home with shape-shifters and those who can communicate with animals, it’s hard not to feel like you don’t belong. It’s only once Mirabel starts peeing closer at her family and their home that she realizes the Madrigal family may not be as perfect as the town thinks. She may even be the key to making sure her family doesn’t break down in more ways than one.

It’s surprising how emotional such a film becomes yet still has the energy to be incredibly exuberant with musical numbers fit for a fast-paced Broadway production. The musical numbers bolster everything from a festive household teeming with life to an honest melody amid dancing sheep. Much like In The Heights, the songs help build character and delivery exposition in a meaningful yet zippy way. I really dug how Mirabel motivates in describing everyone from her adoring Abuela Alma (María Cecilia Botero) to the uncle they don’t talk about (John Leguizamo).

The animation feels incredibly free with its own vibrancy. Everything from the floors to the weather can change with a mere snap of the Madrigal magic. Even with such a crowded ensemble occupying the household, where the intro song requires a brisk pace to cover everyone, there’s a distinction in the varied character designs that goes beyond just who has what power. I really dug the look of the towering giant Luisa (Jessica Darrow) and the cautiously knowing Dolores (Adassa).

But the highlight of the picture is by far Mirabel and not just because she’s framed in the typical Disney princesses format. She is not posed as the prettiest of the family and seems to be the only one wearing giant spectacles. She feels very relatable as the daughter trying to prove herself in an environment where she feels she may be inadequate. Thankfully, her resolve is not to make some ugly-duck transformation but live up to being more open about her feelings. This leads to one of the most lavish musical numbers where confronts her gorgeous sister Isabela (Diane Guerrero) with an emotional rollercoaster of sibling rivalry.

Encanto manages to bring some fresh ideas to Disney animation while still being a joyous picture of familiar sensations. It adheres to a lot of the fun energy one expects from such animated features while still showcasing characters, worlds, and stories that feel fresh and exciting to explore. Even with musical numbers that feel a bit manic in their rapid-fire launching of lyrics, there was a great comfort I felt in such a picture in how it chose to embrace the themes of family, introspection, and open communication. Pleasing to both the eyes and the ears, it’s an animated treat I can’t wait to watch again and easily one of Disney’s best non-Pixar animated films to date.