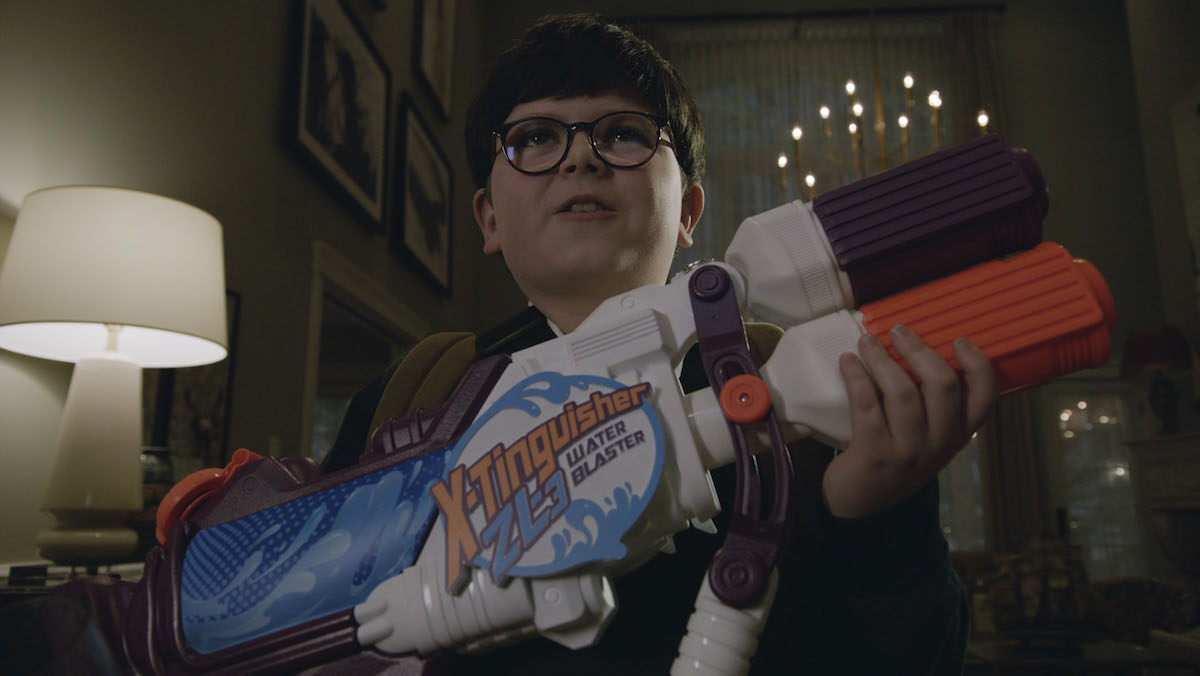 As a spin-off of sorts, Home Sweet Home Alone is a long, long way from what would be called home. The 1990 film that continues to entertain as a mixture of slapstick, childhood heroism, and Christmas cheer feels distant despite being partially present in this picture. Kevin McCallister exists off-screen in this world as the owner of a home security system, hinting at a better film that will never come. Kevin’s brother Buzz is still in Chicago as a local cop who refuses to get involved. These are glimmers from the distant star that was Home Alone, shining far off from the 1990s to only strengthen the nostalgia.

Much like the Wet Bandits (not appearing in this film), Home Sweet Home Alone stumbles all over itself in order to present something similar to the silly violence the franchise is known for. Consider the lead kid of Max Mercer (Archie Yates), played by an actor so loveable the film has to go out of its way to make him more of an annoying brat. Living in a busy home and crowded home, he wishes to be left alone. Such an event occurs when the family goes on vacation. A whole lot of disbelief is suspended for this scenario to work, especially with how Max spends zero time going on the internet or using the voice-activated assistant.

That much I expected. What I didn’t expect was that the intruders Max would have to best would be a struggling couple. Pam (Ellie Kemper) and Jeff (Rob Delaney) have a home they can’t afford for their kids when Jeff loses his job. His job was database management and he apparently lost it because of “the cloud.” Of all the jobs one could lose to technological progress for automation, database manager is the least believable. This aspect wouldn’t bother me as much if it weren’t for the fact that he keeps bringing up how the cloud ruined his career. His zero-impression online resume is as unbelievable as the argument he gets in with a retail employee for not having solid-state storage for their photography app.

The solution to their money woes lies in a rare doll they find in their storage. That doll, however, is believed to have been stolen by Max on a trip to their open house. The bumbling couple figure they’ll break into the house and swipe the doll back. What they don’t count on, however, is that Max has plenty of traps waiting for them. Apparently, the home invasion traps of Kevin are more of an urban legend for nobody to have been wary of breaking into Chicago homes with one kid home.

The traps, I’ll admit, are not afraid to go more brutal than standardly slapstick. There’s a fire that sets boots aflame, LEGO pieces that pierce feet, and icicles that nearly impale Jeff’s crotch. There’s some admiration for such elaborate contraptions for as unbelievable as it would be that one kid could assemble it all on his own with zero help from the internet. There must be something in the Chicago water that apparently makes latch-key kids becomes geniuses for abusing castle doctrine to the extreme.

Nothing in this film lands, especially when it tries to get meta. One of the most painful scenes occurs at the house of Pam and Jeff where the family is watching a movie. The movie is a sci-fi revision of the same gangster picture Kevin watched in Home Alone, complete with the familiar dialogue and gunfire. One of the family members commented that the movie sucks and that you can’t beat the original. Here is a picture that is actively trying to beat you to the punch of making fun of itself and it fails since the punchline is correct. But what laugh is the audience supposed to gain from this? Won’t they just feel like hitting the back button and go find Home Alone on Disney+ instead? That scene certainly feels like an invitation to navigate away.

Home is where the heart is and despite being present twice in the title, Home Sweet Home Alone has no heart. It’s a lifeless picture with humor that never lands a laugh, characters that you feel nothing for, and traps that are solid but never hit hard enough for a giggle. There may have been some hope for such a picture with a notable kid actor and the screenwriter from Borat. Unfortunately, there is little to note about this picture being anything more than Home Alone 6.