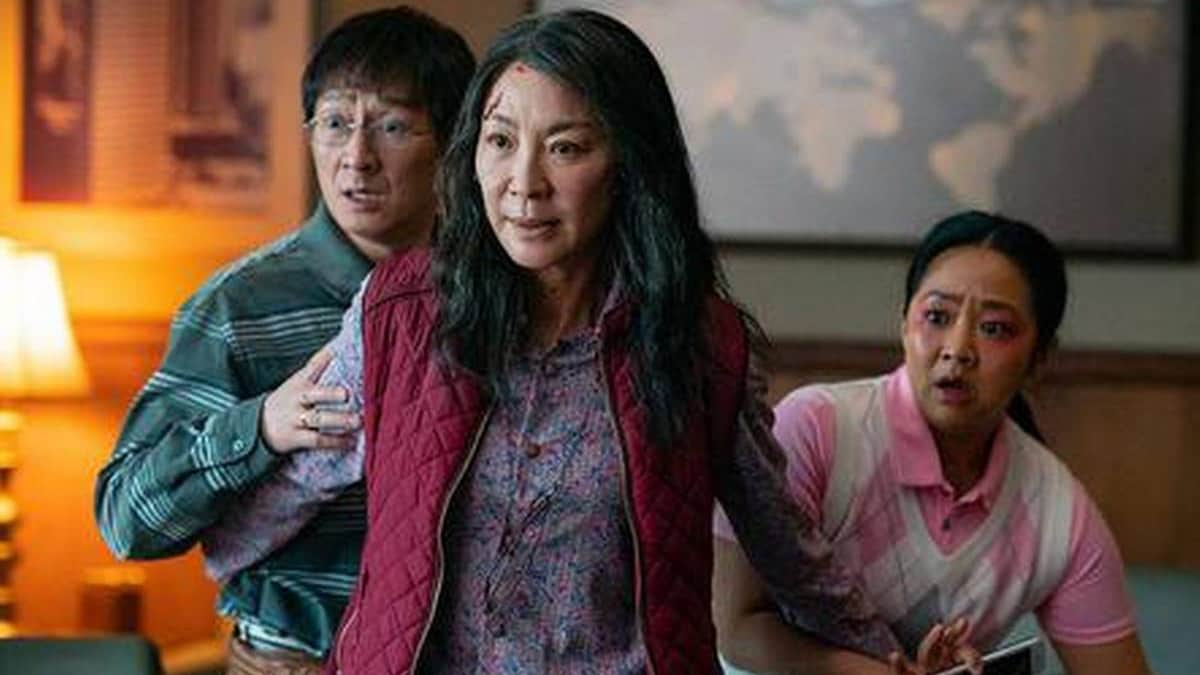 What an amazingly alive movie! Everything Everywhere All At Once combines a whole of everything into a meaningful tale of life and love while still being a berzerk kaleidoscope of weirdness. It has kung-fu, multiverse travel, mech suits, and chaotic fight scenes that use buttplugs as weapons. It manages to be all over the place in its staging yet surprisingly on point in its central focus of existentialism.

Michelle Yeoh plays Chinese-American laundromat owner Evelyn Wang. Her life has taken a turn for the worse. She’s losing the bond with her gay daughter Joy (Stephanie Hsu), her husband Waymond (Ke Huy Quan) is seeking a divorce, her scrutinizing father Gong Gong (James Hong) is staying with them, and the taxes for their business are not looking good. With everything going wrong, Eveyln feels as though she needs an escape. She finds one but perhaps not the diversion she was expecting.

In a wild moment of body possession, Evelyn’s husband from another reality corners her and tells her that she’s needed to save all of existence. Her life suddenly has something more dire and exciting than making sure she won’t be audited. As it turns out, there’s some multiverse menace terrorizing and destroying various universes. Many Evelyns have tried and failed to stop her. It initially seems like this Evelyn won’t fair much better, as she is openly referred to as the worst possible version of herself throughout the multiverse. But her unfortunate situation might just make her the one to fight back against the end of all things.

The film is broken into three parts based on the title. Throughout all of them is a great deal of focus on omnipresence, being aware of all things and possibilities. Evelyn discovers an ability to tap into multiple versions of herself that have different skills. In another reality, she didn’t marry her husband and ended up studying martial arts to become a big star. Another reality has her becoming a chef with exceptional skills. She can tap into all of this if she’s willing to go outside her mundane life. She literally has to do something unexpected and random to throw off her own timeline and draw from another. It’s a method that is both hilarious in the absurd and free in the sense of Evelyn becoming more comfortable with herself beyond social norms.

The film is packed with so many surreal sequences that assault the screen in fast succession. One scene you’re watching someone engage in combat with a fanny pack and the next you’re watching people with hot dog fingers engage in sex. One scene could be a heartfelt connection between mother and daughter and the next involves a puppeteering raccoon. It’s all very trippy yet it all connects in a fantastically philosophical tale of finding worth in the world.

Yeoh brings her A-game for this role where she plays everything from an overworked mother to a master of kung-fu to an electrifying actor. She is so much fun to watch as a fish-out-of-water character who not only finds a way to swim but makes the world a better place for everybody. Stephanie Hsu brings a lot of sass and grit to her role as the rebellious woman who finds a certain peace in nihilism for a fruitless future. Ke Huy Quan also deserves a lot of credit for making fast transformations from meek to magnificent, pulling a Superman-style switch when he finds himself jumping between universes and bodies. Jamie Lee Curtis makes quite the transformation as well by melting into the role of a middle-aged woman who you wouldn’t suspect could deliver fast and furious punches (you won’t even believe the other role she plays). And, wow, James Hong still can act like a pro in his 90s, going from feeble grandpa to mech-suited warrior with ease.

The film nearly becomes a blur of surreality and serenity, trying to find some meaning in the chaos of it all. It does lavish in that whirlwind of special effects which create a wild world where anything is possible. Anybody could turn into anything at any moment, where cops become wrestlers and office clerks become vicious ninja assassins. The unpredictable nature manages to keep pace with the audience so that vividly bizarre nature never loses its effect. Just when you think you’ve seen it all, there are some surprisingly touching moments where two rocks talk to each other in a world without humans.

Perhaps the film is best summed up by its major MacGuffin of a bagel. An everything bagel containing everything and ultimately nothing. It’s an absurd sight when you witness this dangerous bread of unknown materials but it also represents a desire to end it all. Evelyn tries to prevent the total destruction of all things by essentially convincing someone not to throw their entire existence away by submitting to a bagel. For as comical as that sounds, it’s a surprisingly heartfelt mission that always feels earnest.

Calling a film like Everything Everywhere All At Once a weird movie is a massive understatement. Even calling it a transcendent work of sci-fi cinema doesn’t do it justice. This is one of those films that is guaranteed to warrant multiple viewings to catch every little detail and observe the grander philosophical implications. The love I have for this film can’t be overstated as one of the most perfect movies for merging sci-fi silliness with existential reflection. What a masterpiece of a movie!