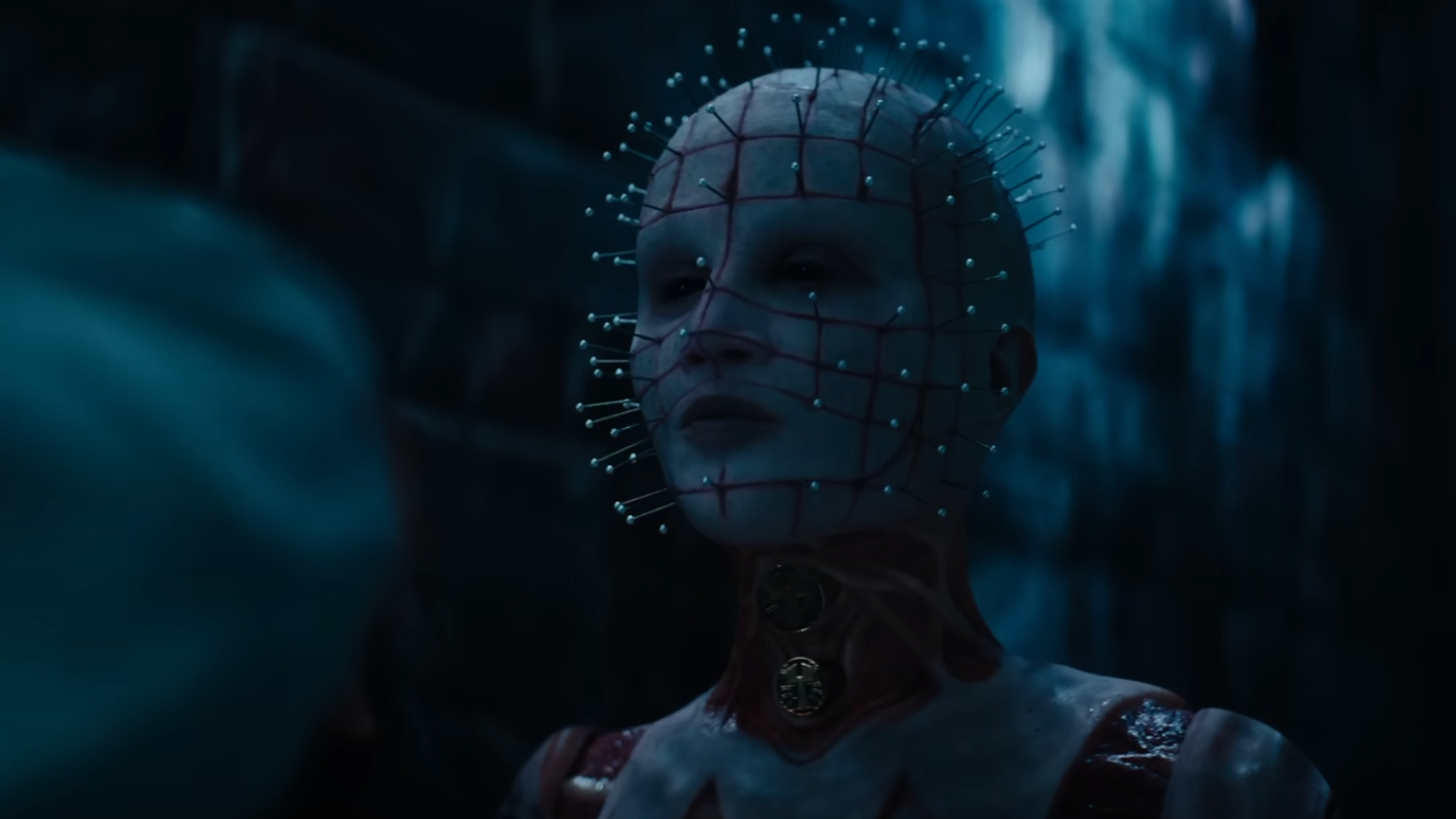 The desire for power drives men to seek the horrors of the mysterious puzzle box. Roland (Goran Višnjić), a wealthy man, comes into possession of this box and convinces the unwitting Matt (Brandon Flynn) to solve it. Matt asks if he gets a prize for solving the puzzle. “I do,” responds Roland. Before Matt processes what that means, the box moves, and out comes the horrors. Twisted visions and dark promises flow from the other realm, promising something beyond any sensation.

Trying to solve Matt’s mysterious disappearance is his sister Riley (Odessa A’zion). It won’t be easy for her as she’s a recovering alcoholic who is having heavy problems staying on the wagon. Haunted by the past, she attempts to drown her terror in booze and sex. Soon, she discovers the locked-away puzzle box. Her curiosity unlocks the viciousness of the Cenobites, appearing just as gruesome and weirdly erotic as they’ve always been. There are ones that bite, ones that wrap, and, of course, the leader Hell Priest (Jamie Clayton), seducing with a sultry voice and grotesquely stabbing with the pins lodged in her face.

Hellraiser has a beautifully dark and grotesque atmosphere. Right from the opening torture sequence, the supernatural terror sets in quickly. It helps that Riley’s world is already chaotic and dirty with her problems handling addiction. Nothing seems to go right, and a relationship with the handsome Trevor (Drew Starkey) she met at her recovery program finds her falling off the wagon. This causes her to clash with her other friends, including Matt’s boyfriend Colin (Adam Faison). So when the Cenobites start demanding sacrifices, she’s finding herself in the most difficult of scenarios, where the walls extend and the ground opens up in a creepy way.

The kills are absolutely vicious and skin-crawling, just the way a Hellraiser film should be. One of the highlights is when the Hell Priest jabs a pin through a victim’s ear canal with a gross-out close-up. Characters are also gored and dissected in a variety of ways why the transient Hell Priest speaks of greater pleasures beyond the extremes of the body. There’s also a lot of fun to be had with the Cenobites mucking about Roland’s weird mansion of traps as he tries to bargain with the Cenobites about finding something more than immortality.

What makes the film work all the more is the firm focus on power. The Cenobites can offer something beyond mortality and spirituality but offer it at the heaviest price. Sacrifice takes on a darker aspect when someone as greedy as Roland doesn’t stop at immortality. His desires ultimately get the better of him but in ways, even he can’t comprehend. This leads to one of the grossest and existentially bizarre endings of any horror film I’ve seen this year.

Hellraiser is a well-done pound of a body horror bonanza, tenderized and grilled to perfection, just the way I like it. It’s as brutal and scary as it is a richly meditative experience on the nature of being bound by body and uncertain of what lies beyond. More importantly, the Cenobites are terrifying for more than just their ability to gore anyone who gets a stab from the puzzle box. They represent a pandora’s box of desire and control, taunting someone as down on their luck as Riley as it does a greedy jerk like Roland. Director David Bruckner has already impressed with his previous films The Ritual and The Night House, proving that he not only gets what Hellraiser is all about but finds the best ways to make it his own type of picture.