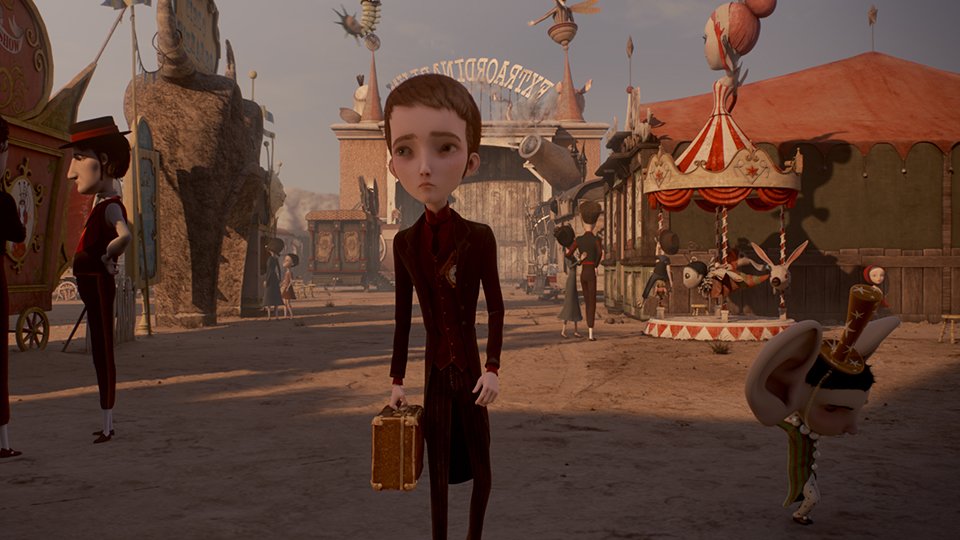 Computer animated films tend to follow a specific track to keep everything looking clean, pretty and bouncy. ‘Jack and the Cuckoo Clock’ attempts to break all the rules and delivers a more artistic animated film as if it were a trippy fantasy from the 1970’s. It plays with the medium, switches it up constantly and constructs a unique world of European gothic. The movie also happens to be a musical set with a darkly romantic tone and an undeniably odd charm. It’s as if someone took the brain of Tim Burton and injected it with a large dose of pep.

Our protagonist is a boy born on the coldest day that his heart was made of ice. Before it could melt, the midwife replaces his freezing organ with a cuckoo clock. After the depressed mother leaves, Jack is raised by the midwife so that he’ll adhere to the rules of maintaining his heart: Keep it clean, keep it wound and don’t fall in love. If the latter occurs, his clock could break down and kill him. But a little death by organ failure can’t stop a romantic youth. On his first visit into the city, he breaks into a song with the lovely Miss Acacia. During their duet, Jack pulls back just in time to save his faulty heart, but loses sight of his love at first sight. Pining for his love-at-first-sight, Jack attends public school with Acacia nowhere in sight. His presence is instead given note to the local bully Joe, determined to mock and assault our poor protagonist. Karma catches up with him, however, when Jack’s cuckoo goes off and pluck out Joe’s eye.

The threat of imprisonment forces Jack on the lamb where he joins a freak show circus of colorful characters. Led in by an eccentric camera man, Jack finds work as a haunted roller coaster host. It is there that he finally meets the lovely Acacia who turns out to have a freaky talent for growing thorns from her skin. Unfortunately, several years have past and the girl no longer recognize Jack as the cute boy she shared a song with on the streets. She recalls the moment, but doesn’t it relate it to Jack. He’s going to have to win her back and fast seeing as how she’s already taken a liking to the villainous Joe.

This is a tremendous film with animation unlike any other feature film out there. Everything from the character designs to the architecture feel very off with a gothic tone adding to the otherworldly quality. I especially dug the design of the trains as octagon accordions that stretch and contract when in motion. The characters all look like big-headed dolls from some old collection unearthed specifically for this film. They don’t have the largest range of emotion, but I couldn’t take my eyes off them. The film also happens to be very well shot, playing with every single advantage of computer animation from the coiling shadows to the strange perspectives through dreams and cameras.

I should mention that this movie also happens to be a musical. The songs are not exactly memorable, sounding more like an opera, but they serve their purpose well adding more style and charm to a film that is already bursting at the seams with it. This is one of the most alluring animated films I’ve seen with an appealing dark fantasy that hooks you almost instantly. Though it may echo elements of Tim Burton’s worlds, it’s presented in this film with far more originality and creativity. The film ends on a somber note with the most artistic representation of accepting one’s fate with the climbing of snowflakes in a frozen world. ‘Jack and the Cuckoo Clock Heart’ is a true artistic feature film that dares to experiment in an expensive medium.