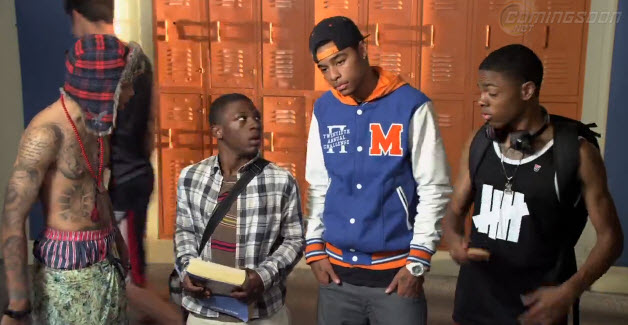 I may have been out of the schools for over a decade, but I sure don’t remember any school dances like the one in this film. Actually that title isn’t even accurate as the key event is a school lock-in. That being said, I’ve been to school lock-ins as well that were nothing like this. Even within the cartoonishly satirical world weaved around this event, this is a movie that defies logic on such a ridiculous level that even over-the-top high school comedies of the 1980’s would blush at such a product. That’s to say nothing of the fact that it is disgustingly vulgar, sexist and racially backwards for what is supposed to be a comedy. This is a film that demands you not only check your brain at the door, but your sanity as well.

The only character who seems to be sane is Jason, our teenage protagonist seeking to be initiated into a popular clique while at the same time trying to acquire his true love. And, wouldn’t you know it, his two issues happen to collide as the only way to be accepted by the social group he seeks is to retrieve a woman’s panties. Who better than your true love, right? The best time for swiping a pair of female undergarments happens to be the school lock-in in which all the students drink, smoke and have sex. The teachers don’t give two damns seeing as how they’re very poor stereotypes of adults drowned in the rap lifestyle. The principal does nothing but talk about women as bitches and the white, female teacher is constantly talking about rap music.

What makes matters worse is that the movie tries to capitalize on typical high school plots without any rhyme or reason for getting from point A to B. The school lock-in happens to have a rap battle where the grand prize is $2000 which works out nicely for a student who desperately needs that exact amount of cash. Where did the money come from and why is the school holding such a contest? Beats me. The female love interest also happens to be the relation of a rival Mexican gang of Jason’s would-be clique. I’m sure this was intended to give a sort of Romeo & Juliet angle to the love quest, but it’s treated more as a comical turf war as if it were from another terrible movie. At one point the gang of Mexicans smash a man hole cover on a black gang member’s face repeatedly while he calls for help from his wimpy gang members. The assaulted man ends up with little more than a few cuts on his face. This is when the movie crosses over from a real high school comedy to a pure cartoon. Nothing seems at stake until the final act where somebody gets shot on school grounds and it’s apparently a laughable moment.

The most insulting thing about the movie is that it’s a mess of stereotypes. All the girls at school are highly sexualized, the black characters are all seen as slanderous gangsters and the white cops are dumb racists who fall for easy traps like pot brownies. It’s moments like this where I have to ask myself if this sort of dated perception of the world is still funny. It’s certainly not challenging. The way the movie was directed is almost like MTV vomited all over the cut which seems to randomly insert rap music videos. And I don’t mean to imply that the film is a musical because it’s not. The movie has far too many long stretches where everything will stop for one rap song that comes out of nowhere with hardly any relation to the story. The high school tropes are just awfully inserted as well when Jason does the tired narration of the high school cliques from the sexy ladies to the nerds. What importance does introducing the nerds have on the plot? Nothing since they’re never used. So why introduce them? And why does Patrick Warburton constantly show up in Jason’s head as his mental coach? The reasoning is just baffling.

Why include any of these elements if they’re not expanded or developed properly enough? The failure of the film to find reasoning in anything makes it feel more like a machine than a presentation. Rap music, gangster speak, sexy teens, dumb cops, gang war, high school dance, clique initiation, cut, print, grab the money, next film.