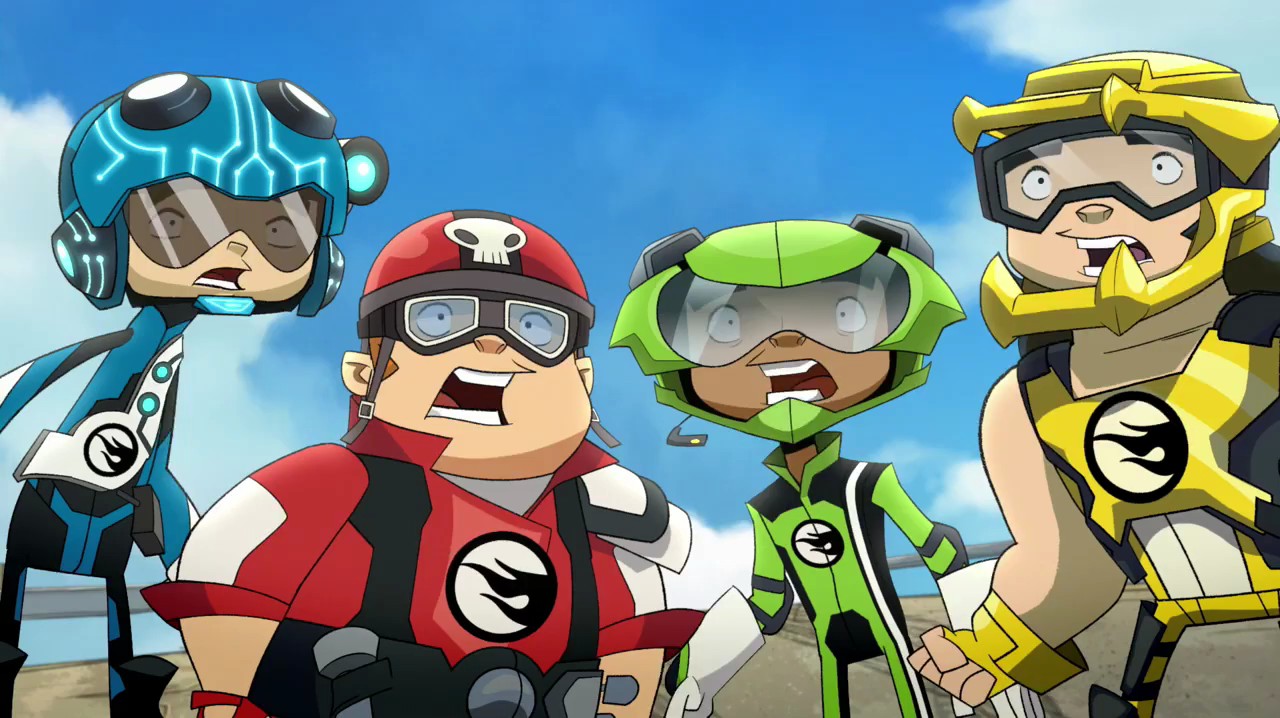 I’ve seen so many of these commercial-based animated films over the years which do little more to sell toys that you start to grow tired of their shameless formula. ‘Team Hot Wheels’, however, managed to surprise me from its first vivid and wildly colored shot. A mysterious car whizzes through the dessert with a popping purple dust. It looks like something straight of an A+ animation student’s demo reel and that style maintains throughout the picture. As far as these types of movies go, this one has a unique animation style with a clever wit unlike anything I’d expect for a direct-to-video release.

The story is simple enough. Four kids are so bored with their town that they congregate with a local automotive mechanic the helps them fix up go-karts. When they’re behind the steering wheel, these kids own the town with their various expertise that include gadgets and daring feats. My favorite of the group is the portly member who fancies himself a car guru believing he can connect with a vehicle through meditation and oneness. Their town is put in peril, however, when a strange driver known as Rev rips up the road of the town with his seemingly magical car. Apparently it has some form of imagination generation that causes all kinds of strange effects as when pigeons turn giant and a robotic Abe Lincoln turns evil. Being a Hot Wheels film, you’ve also got to have that tie in with the iconic orange tracks. The kids are the town’s only hope as the eccentric and sly mechanic they befriend bestows some super-powered cars they can utilize to catch the speedy menace. Don’t bother questioning whether kids should be driving such cars without licenses as that would slow down the momentum.

‘Team Hot Wheels’ has a lot to love from the start. All the character have some very funny dialogue on par with animated pictures such as ‘Cloudy With A Chance of Meatballs’ and ‘The LEGO Movie’. Very few of the gags ever miss a beat and have the perfect timing to keep any family smiling throughout. The animation style is also very admirable as a cross between traditional 2D animation and 3D computer graphics. A true mark of quality is when you can’t quite tell the difference between the two mediums. The only time it becomes abundantly clear is during the car racing scenes in which the vehicles are far too slick compared to the rest of the animation.

While I enjoyed the spirit and the look of this movie so much, it was rather disappointing that this was such a substandard story. The mysterious car chase is a decent concept, but then the plot begins to veer off into needless filler with the boys experimenting on animal DNA. The boys want faster cars so they use the DNA of various fearsome animals to create self-aware vehicles with an unstable nature. It’s the one time during this video that I felt it was a shameless plug for toys. The whole plot with Rev, as loose as the rules for that scenario were, was far more entertaining watching the boys save their town from all kinds of weird creations Rev leaves in his wake.

I grew a little tired with ‘Team Hot Wheels’, but was impressed enough by the characters and the animation to recommend the video. Kids and adults alike will appreciate its enthusiastic nature, but I just wish it had a better story to elevate all the other elements. This production team deserves another movie and a better script which I hope they’ll receive in the future. If they do, they’ll be able to make some an animated film that transcends any other animation on home video.