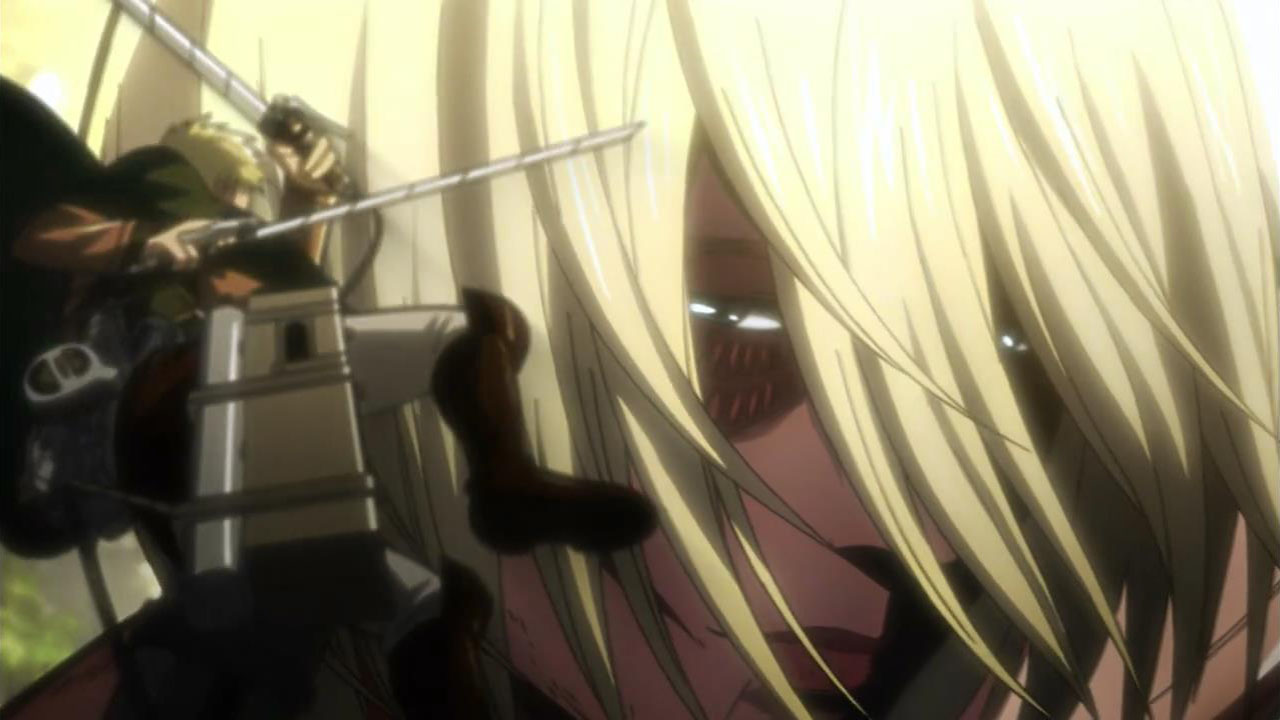 ‘Attack on Titan’ presents a darker twisted world of giants that’s less like a fable and more like a zombie apocalypse. Cities are attacked by marauding, monstrous creatures with human features that eat humans constantly in their mindless hunts for food. They don’t wear clothes, they don’t come from beanstalks and they certainly don’t speak with the usual Fe Fi Fo Fums. The only hope against taking down these towering enemies is an elite group of soldiers equipped with zipping grappling hooks and swords for slicing. I’m not too sure why they don’t just develop guns they could carry, but that probably wouldn’t looks as skillful as swordsman flying across the trees.

This second volume manages to up the ante by providing a new kind of giant. This one is an athletic female who is fast on her feet and doesn’t appear to eat any of her victims. With far more intelligence, she chooses to kill those in her way in a more creative manner by kicking them into the sky, smashing them against trees and whipping their bodies around like yo-yos. With the recent revelation that humans have the ability to transform into these giant killing machines, there is a mystery afoot trying to uncover just who is this new Titan assaulting the current group of soldiers on their current mission. But being such an efficient killer, the group may not live long enough to uncover the true identity.

What’s truly admirable about this series unlike the film ‘Jack The Giant Slayer’ is that there is a real sense of tension. We spend just enough time with the human characters that we care when the carnage begins to unfold. Like most Japanese animation with a horror element, the kills are very brutal and bloody, but they pack a bigger punch when it happens to the primary characters. The show builds them up and then takes them away quickly in a manner that isn’t overly dramatic. There are never any clear visual cues about who is going to bite the dust. When people are killed by the Titans it happens fast and without warning. It is nearly impossible to estimate who will and will not make it out alive.

While this second volume does provide more thrills and some interesting explorations on the mechanics of the Titans, I can’t help but point out that this entire volume was mostly just a chase. Things pull together in the end with a finale between the two human-mutated Titans, but for most of this arc we’re just following a group soldiers being picked off one by one in the woods by the giants. I wish there were some more dialogue exchanges between the characters that developed them just a little bit more. The few passages that are not focusing on Titan strategy is reserved for some truly awful dialogue about teamwork and bravery. Those are solid concepts, but they’re delivered as if this were a program for very young children.

All that being said, I did fall for the addictive nature of the show. The Titans are all very frightening with the otherworldly art style and freakishly horrifying manner they seek their prey. It’s little more than a chase with some swordplay, but it’s darn good at what it seeks out to accomplish more than any other anime. I don’t normally go for series with such a drawn-out arc of little more than action, but this ‘Attack on Titan’ is one I just couldn’t resist.