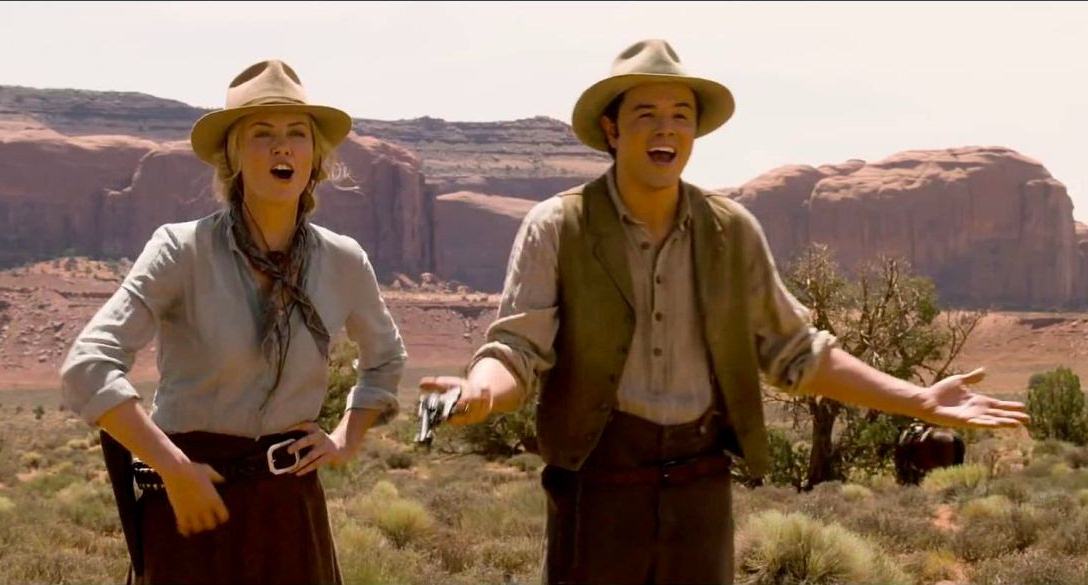 ‘A Million Way to Die in the West’ is written by, directed by and starring Family Guy creator Seth MacFarlane. He chooses a decent concept for his second feature film which focuses on the nasty reality of the old west. Seth MacFarlane plays the straight man providing commentary for how this era was a terrible time for disease, corruption and violence. It’s not a bad idea for some gags, but the problem is MacFarlane grows bored of it very quickly and switches the film over to a barrage of childish gags involving bodily functions, curse words and sexual acts. But even in that arena, Seth still fails to deliver anything clever or amusing about the level of comedy. I’m trying to figure out what other project he was working on at the time that made him turn in such an uninspired script.

The story itself is nothing special. MacFarlane’s character falls for an outlaw played by Charlize Theron who helps him learn to shoot a gun so he can best a mustache salesman played by Neil Patrick Harris who is now dating his ex. And then eventually he has to face off against the ruthless traveling bad guy played by Liam Neeson. Much like the gags there is plenty of potential here that is never once tapped and he’s given nothing to work with. Much of the humor is also rather baffling and it seems like some of them may be in jokes we are not let in on.

MacFarlane even manages to find ways to completely waste cameos. Several actors reprise their roles from previous films and don’t really have anything funny to say or do. They just sort of show up to make a movie reference and then leave. Is this really what passes for comedy? I suppose it has to since the dialogue jokes meander and the physical gags are just flat. What is so funny about Neil Patrick Harris pooping in to various hats for an extended period of time? Is it the length that’s funny or the punchline where he trips over one of the hats spilling excrement all over the road?

‘A Million Ways to Die in the West’ is vulgar, low-brow and sometimes offensive as it struggles to whip up some laughs. But what’s more offensive is that this is a film that didn’t feel the need to try. It didn’t want to try to stick with the satire of the old west. Instead it just wants to make some toilet jokes and that’s supposed to be enough. The devoted followers of MacFarlane’s comedy work deserve so much more than what this film has to offer. You can live a long and healthy live if you never see this sad excuse for a Western comedy.