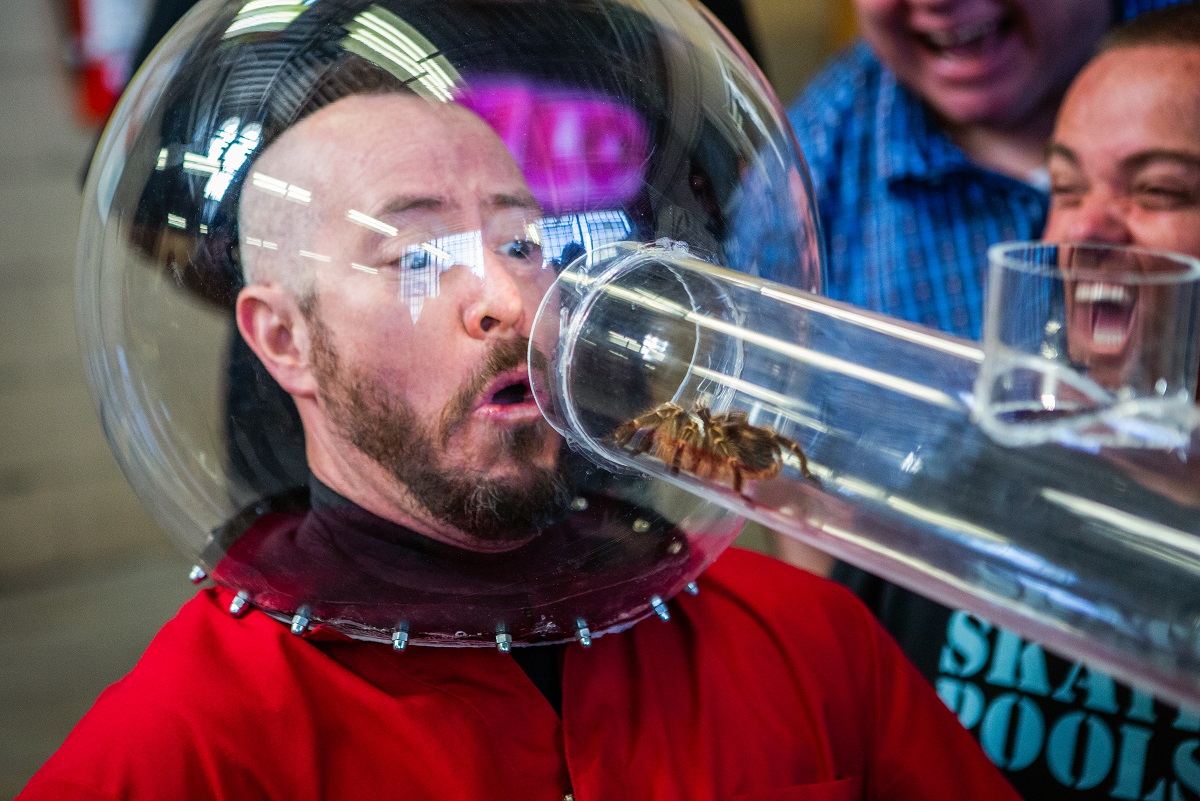 How many ways can a nutsack be hit? How many games can be played with a penis? How far can a man be launched into the air? These are questions that are posed with the fourth Jackass film that tries to find ways to outdo what it has done before. Somewhere between vaudeville and a freak show, the saga of Jackass continues to be a prank and skit smorgasbord. Without much a narrative, these films can really only be judged on whether or not their constant slapstick generates a laugh. On that level, Jackass Forever can still deliver some laughs and wincing, even if most of the antics feel like reprisals and tests for a new crew of daring weirdos who will willingly get nude, take a punch, take a fall, and/or endure the most absurd of situations.

Jackass certainly hasn’t lost its touch with epic introductions. For the opening number, the ensemble of Jackasses, both new and old, stage a Godzilla-style monster movie with stunts and miniatures. For the stunts, they’re chucked through walls, thrown by explosions, and launched in portapotties. For the miniatures, Chris Pontius’s penis is transformed into a puppet. There’s a charming and daring nature to such a sequence that is rather admirable in its own “look what we were able to place on the big screen” sort of way. I can’t honestly say I’ve ever seen a penis-puppet kaiju movie before so major props for innovation.

It’d be impossible to talk about this film piece by piece without spoiling much of its shock value by going through each segment. What I can say is that they still have a knack for subversion. Though the opening miniature sequence is quite obvious, there are more elaborate tricks for the eyes, where backgrounds take on Looney Tunes qualities, and testicles are mistaken for punching bags. I’ll never forget that amazing gross-out moment in Jackass 2 where the establishing shot of a bathroom is soon revealed to be a miniature when the first big chunk of feces plops down from above. There’s a handful of those types of moments in Jackass Forever.

Of course, the boys are getting older and certainly showing their age. Thankfully, there’s some new blood present to take on more gags. New additions to the cast include the eccentric Jasper Dolphin, the heavy Zach Holmes, and the first female Jackass member, Rachel Wolfson. They carry on with some of the more elaborate stunts some of the boys find themselves too old to attempt, such as human surfing off a slicked-up ramp right into a sand dune or being stung on the lips by a scorpion (Wolfson is quite the trooper for this segment). That being said, Johnny Knoxville isn’t averse to such stunts as being shot out of a cannon or being hit by a bull.

But, hold on, didn’t Johnny get hit by a bull in the last movie? Yes, he did and the film points this out. It also points out how they go back to some of their older gags to better perfect them, such as one of their oldest bits, The Cup Test. It’s a simple bit about seeing how effective a crotch cup is at protecting your penis and balls from a punch. Jackass Forever extends this gag to being punched by a professional boxer, hit with a softball by a professional player, slammed with a puck by a professional hockey player, and a pogo stick thrown in for good measure. Before this segment begins, the old Jackass crew points out how they tried this gag out decades ago. Now, in their fourth film, they remark with a smile that they’re still doing the same stupid shit.

Even though I will admit there was a constant smile on my face, I must admit this is the weaker of the Jackass movies. It does still have some allure to its many skits, from bears eating off an electrocuted Danger Ehren to Machine Gun Kelly getting smacked in the face by a giant hand. But the series is also repeating much of its many bits, attempting to recreate the greatest hits to the crotch. There’s the quintessential scene where Johnny gets all dressed up in old people’s makeup to become involved with a surprise stunt at a furniture store. Given how frequently Johnny pulled off such bits in the narrative Bad Grandpa, the audience expects no less than him being sent flying through the ceiling. There are so many other classic skits revived that it feels less like the daring troupe is trying to come up with new material and really just polish their better ones. Sure, it’s shocking showing Steve-O have bees swarm his penis but there comes a point in this movie where you see so much penis that the effect becomes numb, where witnessing a bleeding ballsack feels pretty par for the course.

Jackass Forever shows its age but can still muster up one more punch to the nuts or shot out of a cannon. It features a handful of funny cameos by Eric Andre, Tyler The Creator, and Tony Hawk, even if there isn’t too much pulled off with them. The skits are pretty funny and pull the camera back enough to think of just how much footage was left on the cutting room floor when it felt like the pranks never ended on set. Still, the repetition and frequency of shock make one ask the more important question: How many laughs can you get with a gallon of pig cum? The answer is a few but not as many as you may think.

One thought on ““Jackass Forever” Review”