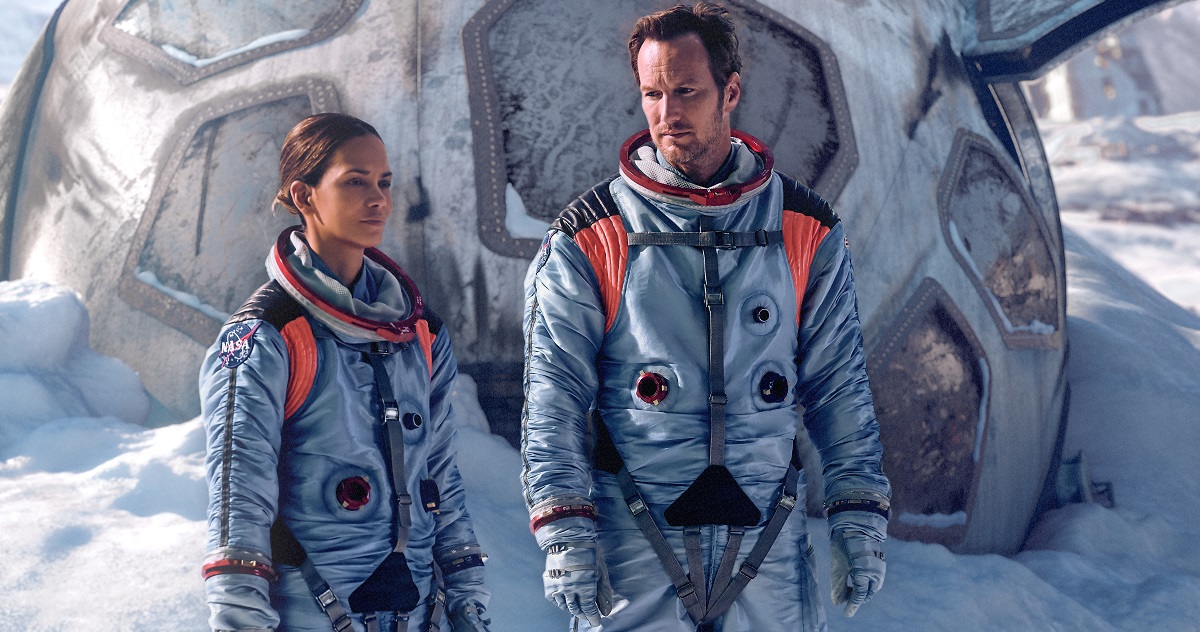 There’s a perfectly poetic moment in Moonfall where the absurdly left-field twist of the premise is delivered by a child. That’s just too fitting for giving the film’s silliest exposition a childlike approach, giving off the sensation of just making up something wild off the top of your head. By this point in Moonfall, all semblance of finding something dignified in its apocalyptic action setting is long gone. After all, it’s a Roland Emmerich movie and I expect them to be loud and dumb. And, oh boy, does the ridiculousness soar to heights so astronomical it’s an absolute howler of a movie so bad with laughter so hard.

The story is yet another ridiculous premise concocted for excuses to watch cities crumble and explosions pepper the planet. The moon has mysteriously been thrown out of its orbit and is currently on a collision course with Earth. Within days, Earth will be hit by the moon and humanity will end. To stop this threat, a series of events brings together a trio of misfits. Brian Harper (Patrick Wilson) is a former NASA astronaut that was kicked out a decade ago for arguing that a mysterious alien killed his fellow crew member. Jo Fowler (Halle Berry) was with him on that shuttle mission but remains at NASA and is the first to spot this moon threat. Well, officially, anyway. The one who makes the initial discovery is the dorky geek KC Houseman (John Bradley), a conspiracy theorist who wants to prove himself as being correct. Now is his time to shine.

If you’ve already got some of the tropes on your Emmerich Bingo card filled out, you’re going to get a Bingo faster than you think. This film is overloaded with all the typical tropes and hallmarks of a disaster movie. You have the ex-partner in a position of power who still has feelings for Jo. You have the recluse son who needs to prove himself during such a dangerous time. You have the kid in danger. You have the snooty elite step-dad who sacrifices himself for the good of his family. Nukes become an option for stopping the moon and ancient shuttles are brought out of storage. Oh, and let’s not forget Donald Sutherland showing up to play the only role he would ever play in such a movie.

This film grows more absurd by the minute, increasing in ridiculousness as much as the carnage. It starts with simple idiocy for characters who state laughable scientific facts and dialogue that never hits the right emotional notes. Once KC Houseman comes into play as a big ‘ol ball of cringe, the misfires kick into high-gear for a character with a cat named Fuzz Aldrin and a poster of Space X on his wall, leading this conspiratorial weirdo to literally ask himself “What would Elon do?” A groan washes over the audience at this line. It won’t be the last this character sucks up to the billionaire either.

By the time it’s revealed the moon is mere hours away from crashing down, the absurd nature just made me lose it with how earnestly such a big and dumb movie takes itself. Every spec of dialogue where the characters reference the moon as either a threat or an ally is hilarious. Scenes where characters will remark “Oh shit, the moon’s rising” had me nearly falling out of my seat, where the moon is treated like this monster creeping over the horizon.

I also loved how fast and loose the film plays with the scientific logic of the moon’s proximity to Earth, where oxygen will come and go whenever the plot needs it to and gravity will change to fit a more thrilling chase sequence. To explain all this madness, KC will at one point talk down to scientists, telling them his theory about the moon being a mega-structure is correct: “Your rules don’t apply anymore.” Somewhere in the audience is a conspiratorial nutjob who watches Info Wars that is pumping his fist as he nods approvingly.

The special effects are, of course, a major highlight and just as comical. The scene of a space shuttle taking off as it tries to navigate around a gigantic wave of water is such a treat for both looking good and being posed with hilarious heroics. The space scenes feel grand and the alien encountered is rather clever in its design. But, wow, it’s nearly impossible to talk about the film’s greatest setpiece without spoiling its towering deus ex machina of a climax, which may be one of my favorite for being so unapologetically bizarre and laughable. By the time the final plan for this threat of the moon is devised, I was starting to run out of breath with how hard I’d been laughing at how many left-field reveals were lobbed at the screen.

Moonfall is dumb, like most Roland Emmerich movies, but it’s the dumbest of the dumb that reaches such astronomical heights of absurdity that I kinda dug it. How could I not laugh at a film where astronauts pilot a shuttle with the words Fuck The Moon on the fuselage as it plunges into the moon’s butthole? It’s unintentional comedy at its finest and goes full-on crazy in its familiar staging of the world ending.