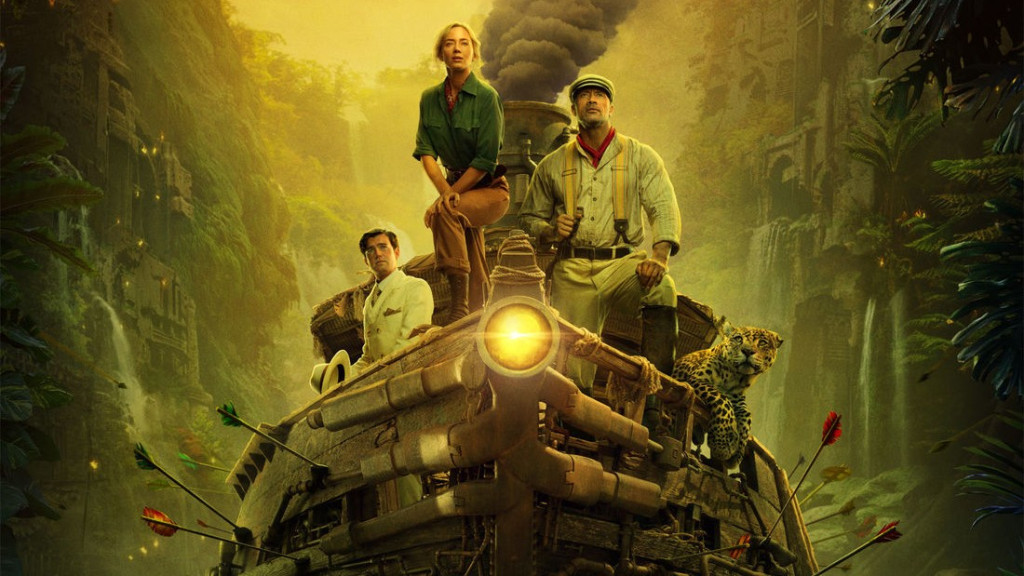 Jungle Cruise is every bit the pleasing summer adventure picture it aims to be. Based on the Disney ride of the same title, there’s probably little surprise that the picture is a fast-paced and quirky trip through the tropics, laced with fantasy and romance. While Disney’s dive into this genre is by no means a subversion or refinement of the jungle adventure, it’s still a welcoming presence as an old-fashioned swashbuckling picture.

Emily Blunt plays the bold scientist Lily and Johnson the even brasher skipper Frank. Lily is a strong-willed scientist who is seeking to prove her skills to the world by venturing off to the jungle to find the mythical Tree of Life. She teams up with her meek but dedicated brother McGregor (Jack Whitehall) to foil any and all who may stand in their way, whether it’s a crusty organization of explorers who refuse their help or a swindler of the jungle. When they encounter Captain Frank (Dwayne Johnson), they may have met their match as this fast-talking and secretive skipper manages to surprise at every turn.

I really dug the dynamic of Blunt and Johnson. Blunt brings stern devotion to standing strong in the face of danger despite not being used to the jungle setting. Johnson, of course, is better built for handling the jungle but not when it comes to the people he aims to swindle. He can put on quite the act and hide many secrets for great reveals but his social skills make him a bit of a disaster. He can’t help but make dad-level jokes which play on words so awkwardly that even his tourist crowd of the 1910s wince and cringe at his attempts for humor. Whitehall also has some charm as the prim and proper brother who finds he just can’t take a trip without dinnerwear. His sissy character, however, does have a bit more to his backstory and gets his moments to shine, sometimes breaking out of his adventure trope of being hostage or victim to rescue.

It wouldn’t be an adventure film without some antagonists and Jungle Cruise has some juicy ones. Jesse Plemons plays the German aristocrat Prince Joachim who is also seeking the Tree of Life and is willing to put up the cash for it. He’s so serious about acquiring the immortal powers of the tree for his country that he’s brought along his submarine just in case he needs to fire off some torpedoes (and he does). He has taken to teaming up with the lost souls of Aguirre and his Spanish soldiers who once sought such a tree, now cursed to live as swamp monsters of the river. This leads to some great visual effects sequences of zombies made out of snakes and bees attacking our heroes but also has Jesse Plemons bickering with bees.

Though he has the shortest role, I’ve gotta mention the wonderful inclusion of Paul Giamatti as harbormaster Nilo Nemolato. As the man who demands money from Frank, he strolls about his dangerous harbor in a white suit with a gold tooth and a parrot whose only phrase seems to be “Frank owes me money.” We get a lot of that trademark Giamatti blustering but it’s hard not to be charmed by his style.

The whole film just has great style and atmosphere. I dug the color palette of the jungle which spans from the warmth of its muddy environment to the vibrant allure of the magical elements. The creative choices in staging thrilling boat sequences over rapids and deadly traps of the jungle all have this vivacious and energized feeling one would hope from a jungle adventure. Director Jaume Collet-Serra, who is no stranger to action, does a stellar job bringing thrills to a picture that relies on quite a bit of visual effects, spanning from boats flying over harbors to Frank’s expressive leopard cohort. Credit should also be given to composer James Newton Howard for finding exactly the right level of eccentricities and whimsy for such a film.

All of that being said, there’s nothing all that original within Jungle Cruise that is going to revamp anybody’s preconceptions of the genre. In fact, those who have been through the arduous journey of the Pirates of the Caribbean films are no doubt going to cite obvious comparisons. Those who haven’t will probably point towards Indiana Jones or The Mummy as similar pictures. Sure, the film does little to subvert but it does give a good polish to a rather dependable breed of films that are perfectly placed for summer entertainment. On that level, even the slowness of the third act doesn’t hinder the pleasing power of the fun characters and action.

Jungle Cruise is a solid return to a familiar genre with enough charm to be worth the trip. The performances are all a hoot, the special effects strong, and the adventure presented exciting enough to be seen as a fresher diversion than a routine escapade on a dilapidated vessel. Yes, it’s an old boat but Disney has given this picture just paint and spit-shine to make such a film gleam with an energetic pull if not an original route.

One thought on ““Jungle Cruise” Review”