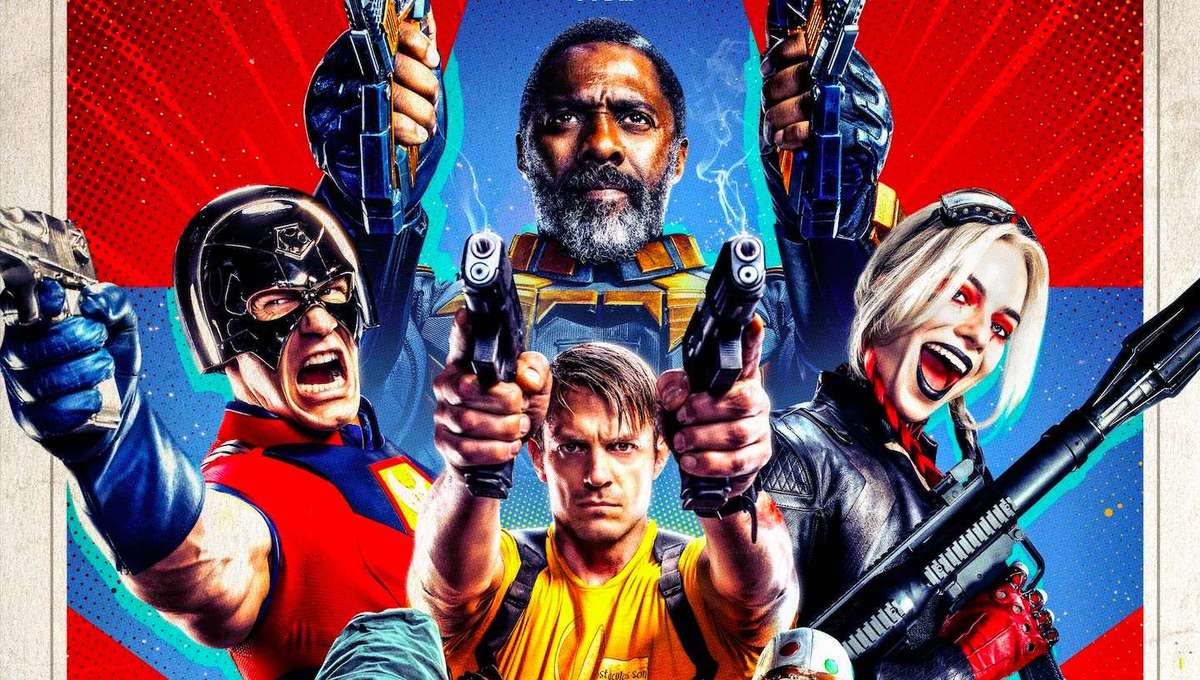 There’s a certain giddy freedom that James Gunn brings to DC’s overhaul of their bitter connected universe. His take on The Suicide Squad is a fiery cocktail that mixes the darkly absurd charm of Guardians of the Galaxy with the bloody crassness of his Troma B-movie days. This much-needed kick to comic book films makes for a wild subversion, where weasels can go on missions, polka dots can kill people, and a humanoid shark can foolishly attempt to disguise himself.

The exhilarating sensation can be felt as soon as the film starts up. Before the opening credits roll, we get the quick version of explaining Task Force X. Viola Davis returns to the role of operations leader Amanda Waller to gives us the brief rundown before a mission starts. We’re quickly introduced to a handful of villains that are sent on a dangerous mission. We see that the missions are actually dangerous where not everyone comes back alive. We also see what happens when members desert and have those explosive microchips in their skulls set off.

A handful of the odd and violent anti-heroes get their own weird and wonderful arcs. Robert “Bloodsport” DuBois (Idris Elba) is established as a criminal with a kid but, unlike the previous film’s Deadshot, his relationship with his daughter is rocky at best. Their meeting at the prison quickly descends into them cursing at each other as Bloodshot angrily states he never wanted a kid and that the only thing he has to offer her is tips about stealing. It is only once Waller threatens the girl’s future that Bloodshot regretfully agrees to engage in her task force. There’s also much going on during the missions to test his ethics. He could walk away when the mission is done or care little for the orphan girl Cleo (Daniela Melchior), aka Ratcatcher II, but something in him clicks that he can’t just think of himself. No rousing speech to pull him out of the villain pool; just a gut feeling that maybe doing the right thing is better than cutting and running.

Other notable squad members include the nationalistic Peacemaker (John Cena), the friendless misfit of King Shark (Sylvester Stallone), the untrusting Rick Flag (Joel Kinnaman), and the sullen Polka-Dot Man (David Dastmalchian) who is haunted by visions of his mother. The dynamic between Peacemaker and Flag is unique as both are bound by duty of serving their country but also have different levels of questioning it. Flag is suspicious while Peacemaker is incredibly unquestioning of US interventionism, even going so far as to describe his patriotism with a gross metaphor involving a beach and penises.

In true Gunn fashion, a number of these characters are called out for their absurdity and even made into more of a joke when placed within an R-rated Dirty Dozen scenario. Peacemaker is called out for his helmet resembling a toilet and Bloodsport is scrutinized for his powers of being an expert marksman far too common. Many of the other members are mostly just there for ridiculous gags. TDK (Nathan Fillion), aka The Detachable Kid, can detach his arms and make them float but he uses them for little more than slapping people around. Savant (Michael Rooker) is an expert hacker but an absolutely terrible addition to any battlefield. Javelin (Flula Borg) is a pretty simplistic figure for wielding his titular weapon and Weasel is…well, he’s just an anthropomorphic weasel. Needless to say, not many of them are going to make out alive on their mission.

Of course, there’s also the wildcard of Harley Quinn, once more played by Margot Robbie, who gives the film an extra boost of exuberance. Despite being treated more as backup, she gets her own little subplot of trying to get over her poor taste in men. She finds herself becoming attracted to an evil piece of royalty but then reminds herself that such relationships usually take dark turns. It’s both intriguing to see such growth in a character but also remains true to her violent nature by burning everything to the ground when she starts noticing red flags. Genocide and killing kids are some of her major turn-offs.

As you may have seen from some trailers and clips, yes, the climax involves the team tackling the giant monster Starro, an alien starfish that consumes humans as part of its consciousness. Thankfully, there’s more at play here than just stopping a monster. As the mission progresses, the concerns are less about Starro and more about the international politics of just why Task Force X needs to destroy this project. It turns out to be more than just some rogue nation getting involved in alien experiments and the highly critical Thinker (Peter Capaldi) has the glory of delivering this subverting exposition where the real villain at fault is not a foreign country but an enemy from within.

There’s a lot of meat to this story that brings up issues of corruption, imperialism, and family. It’s also ridiculously violent and fearlessly funny. Gunn doesn’t hold back in posing this deceptive team of misfits as idiots that are sometimes lucky. They often find themselves distracted and bickering over little things, whether it’s an overhead projector in a mission briefing room or why Peacemaker wears tighty-whitey underwear. The film never tries to make these reforming criminals seem genuinely heroic and often showcases them as brash figures who are more likely to get shot in the face than save the day. In fact, the very climax gives them the option of just forgetting about Starro and they still head into a dangerous battle with a giant monster in order to feel like they’ve done some amount of good in the world. It should also be noted that Gunn’s hallmarks of familiar actors (Michael Rooker, Nathan Fillion), notable cameos (blink and you’ll miss Lloyd Kaufman’s brief glance in a nightclub) and his penchant for tentacles are present in full force.

The Suicide Squad proves to be far more than just a big, fun, and dumb comic book diversion of anti-heroes, even though it is so damn fun. Sure, it improves on a lot of the shortcomings of the first Suicide Squad movie but also becomes far more than an overhaul. It is very much a James Gunn take on DC Comics, delivered at just the right time as the franchise reforms into wilder areas, free from the PG-13 blockbuster restrictions, and try out all kinds of wild stuff. Where else can you see a film where a man-eating shark-man eats a man’s head and tries to disguise himself with a fake mustache?