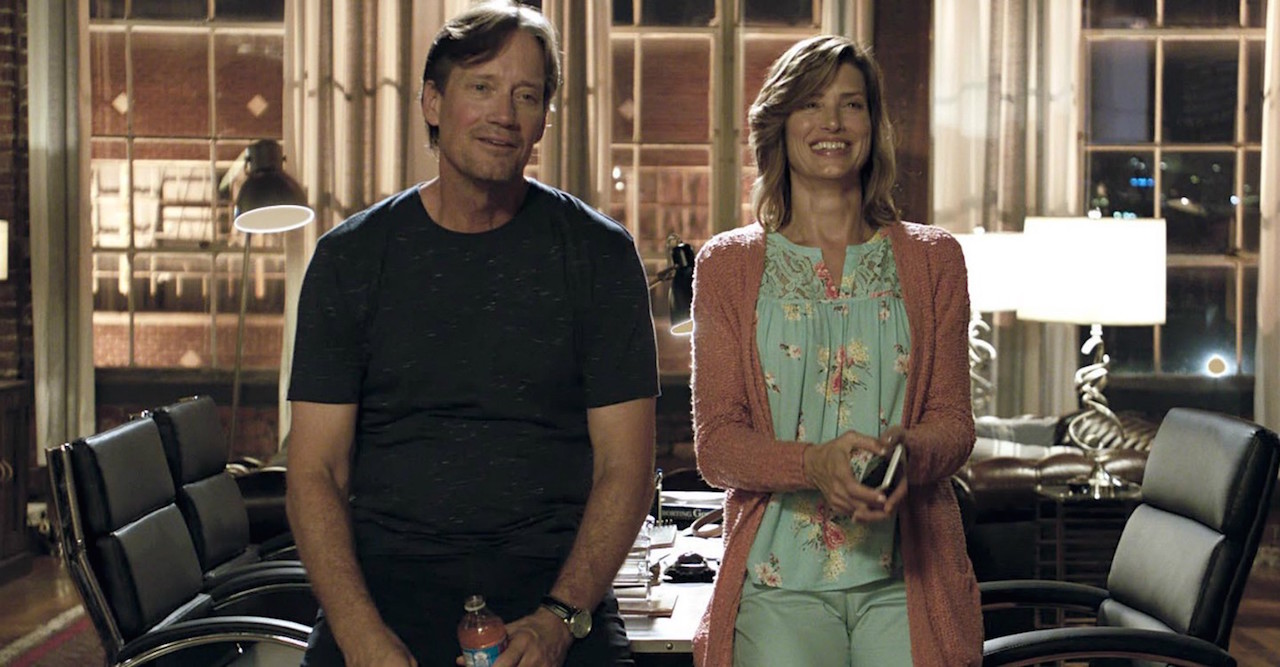 Let There Be Light is the ultimate and most cartoonish of Christianity wish fulfillment. It’s a wet dream of Midwest Christians that would like to believe every atheist is one near-death experience away from being a believer and that Fox News is the savior of spreading the gospel. You know you’re watching the goofiest of Christsploitation when Sean Hannity swoops in to save the day.

Despite being the directorial debut for Kevin Sorbo, he seems to be reprising his familiar role of the villainous atheist character from God’s Not Dead. His character Sol is smug and successful author/debater that has let his bitter pathos steer him down the path of spitting on God. But unlike God’s Not Dead where a car crash forces him to repent on his deathbed, Sorbo survives the crash and visits his dead son in a tunnel of thoughts and light. His little boy, dressed in an illuminated white robe, informs him that he must return to Earth and spread the word of God. That would seem like a tough road for a prominent atheist to pursue, but not in crazy cartoon Christian world! Once Sorbo accepts Christ, everything takes a dramatic upturn. He’ll rekindle his marriage with his ex-wife, get back into the good graces of his kids, and even launch an international Christmas media event to spread the word of Jesus all across the globe. This comes off as less of a story and more for an infomercial where the offers for the religion keep mounting. But, wait, join now and you’ll receive a personal platform on Fox News, absolutely free!

There’s nothing inherently wrong with a story about an atheist finding God, but Sorbo goes the extra mile of absurdity to make this a film that’ll preach more to the choir than win over the other aisle. There’s a consistent need to push through exaggerated observations in order to defend the belief in God. One of the most consistent running bits of commentary is factoring in ISIS into comparisons of Christianity, which the script continues to refute even when nobody was asking or questioning. These elements briefly transform the narrative into less of a story and more of a rant for such ludicrously written pieces as when Sean Hannity meets Sol about a Christian social media campaign.

Sean Hannity: “You guys aren’t worried about how much heat you’re going to get for proselytizing? What about diversity?”

Kevin Sorbo: “Do you think ISIS cares about diversity when they’re chopping people’s heads off?”

All Christploitation elements are present to play a shot game or round of bingo. You can take a shot every time the movie stops for a Christian music video, including the most cringe-worthy revision of “Hallelujah” you’ll ever hear. Have fun keeping a tally of how many times ISIS is brought up as an excuse to shut down any criticisms of Christianity. Don’t forget to keep an ear out for the mention of Chick-fil-A as the only restaurant Christians will eat at for bonus points.

Outside of Sorbo, the cast is painfully bad, struggling to spit out the most awkward of lines that I doubt any living, breathing human being could say naturally. Sol’s ex-wife is seen as the desperate voice of truth, firing back at Sol’s bill paying by saying there are emotional bills as well. Sol’s kids are so awkwardly cast that an attempt by one of them to try to psyche their dad out comes off so weird for being so wooden. Sol’s book agent is a metropolitan figure so over-the-top with how many times he utters the word “darling” in a lame attempt to seem contemporary with the godless heathens. The only natural actor here outside of Sorbo is Sean Hannity, considering he’s playing himself and I could easily buy him selling this event with word CHRISTMAS capitalized in all his on-air dialogues.

There’s a cofounding nature to the true intent of Let There Be Light. It’s clearly built for the Republican Christians to feel good about their faith and justified in their paranoia. However, similar to God’s Not Dead, there seems to be an insistence of trying to convert with the sales pitch for how swell life can be if you let Jesus into your heart. Similar to those tacky informercials, of which the film even makes fun of at several points, the whole thing comes off as a success story that’ll make the middleaged recommend it as a supposed your-life-will-change-forever piece of propaganda. If that doesn’t work, spam their social media with the hashtag of #LetThereBeLight, which the film ends with urging the audience to text right now. But for any grandma hoping this act will bring more into the flock, don’t forget God’s Not Dead pulled the exact same tactic; if that hashtag didn’t work, I doubt this one will either.