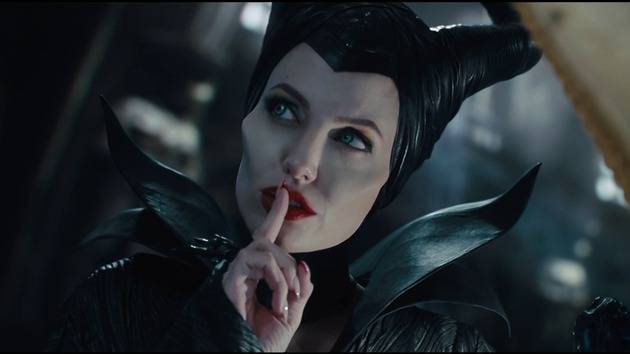 Be it the popularity of Game of Thrones or that trend of darkening up classic fairytales, Disney has taken a new approach to the story of Sleeping Beauty with a focus on the villainous Maleficent. But as the voice-over introduction implies, there’s more to the story than we originally thought. In fact, this version believes that the story is completely wrong. Maleficent wasn’t a villain at all, but a wronged woman who ends up saving the day. Such a route isn’t uncommon as the only two ways to make a movie about a villain is to either have them turn around as the hero or slink comfortably into their role of evil. But in the quest to make Maleficent the hero in this story, so much else is sacrificed in the name of making a female-friendly witch of great power and pathos.

The movie begins innocent enough portraying Maleficent as a curious, young fairy of the forest who fancies a prince that wanders into her domain. The two form a relationship, but their souls grow apart as the kingdom of humans threatens to encroach on the magical forest. Battles ensue between the king’s army of knights and Maleficent’s army of trees. Eventually the prince must make a serious choice about where he stands by cutting off the wings of his secret love. And this is the moment where the story loses all its character and tone the way Maleficent being de-winged is staged as a rape allegory with her being drugged, sliced and crying in a pool of her tears in the morning.

This would seem to be the setup for a darker path of a villain given how horribly wronged she was by her first love. But once we get to the familiar story of Sleeping Beauty with the iconic scene of the wicked witch cursing the princess, the movie starts dipping down into the depths of a mediocre fan-fiction. Rather than despise Sleeping Beauty and attempt to keep her comatose for eternity, the magical matriarch regrets her decision after years of watching over her like a mother hen. Rather than harbor some fleeting emotions of their earlier romance, Maleficent and the prince-turned-king are simplistic enemies. And rather than Sleeping Beauty being awakened by the kiss of a prince, she’s actually awakened by Maleficent herself.

All of this staged as if to imply that the true story of Sleeping Beauty was a massive coverup by a patriarchal society. There’s nothing wrong with rewriting a fairytale from a different perspective, but this one appears more vindictive than creative. The best part of the picture is Angelina Jolie as the cackling and sinister Maleficent, embodying the role as no other actor could. The worst part of the movie is everything else. The character that surround Maleficent’s arc are all one-dimensional. The king who descends into madness has no buildup – one scene he’s a boy in love with a fairy, the next he’s a babbling madman swinging a sword. Prince Charming appears in the picture, but only as a worthless red herring. The three fairies that watch over Sleeping Beauty are just forced comic relief embodying a female version of The Three Stooges. And Sleeping Beauty herself would have been better off spending the entire movie asleep with how little she has to say or do.

The consensus among both the writer, director and Jolie was that they felt compelled to make this movie as an aspiring figure for little girls. Sure, because this is what little girls want to see in a movie, right? They don’t want a fantasy story filled with enchantment and wonder – they want rape allegories and pathos in a tone-deaf revenge tale. The movie is entirely dependent on Jolie’s performance to hold this rickety narrative together that tacks on CGI battles and light humor. At its best, the grand effects of walking trees and fire-breathing dragons is serviceable. At its worst, the bickering of the fairies will have you tearing your hair out in annoyance.

Maleficent features Angelina Jolie all dolled up as the perfect villain with nowhere to go. She leaves behind every single actor in the dust as if her magical powers sucked every ounce of character out of the cast. Even her companion – a crow that transforms into a man – isn’t much for conversation. Though given how terrible the dialogue is of the three fairies, maybe he got off lucky. It’s such a shame that the marvelous talents of Jolie are wasted on a ham-fisted script where she has to act against cardboard characters. Sure, she’s a memorable character for rediscovering love and she emits a palpable charm, but at what cost? I want to love her and this movie, but it’s hard to do that when this picture refuses to define its characters or pick a consistent tone.