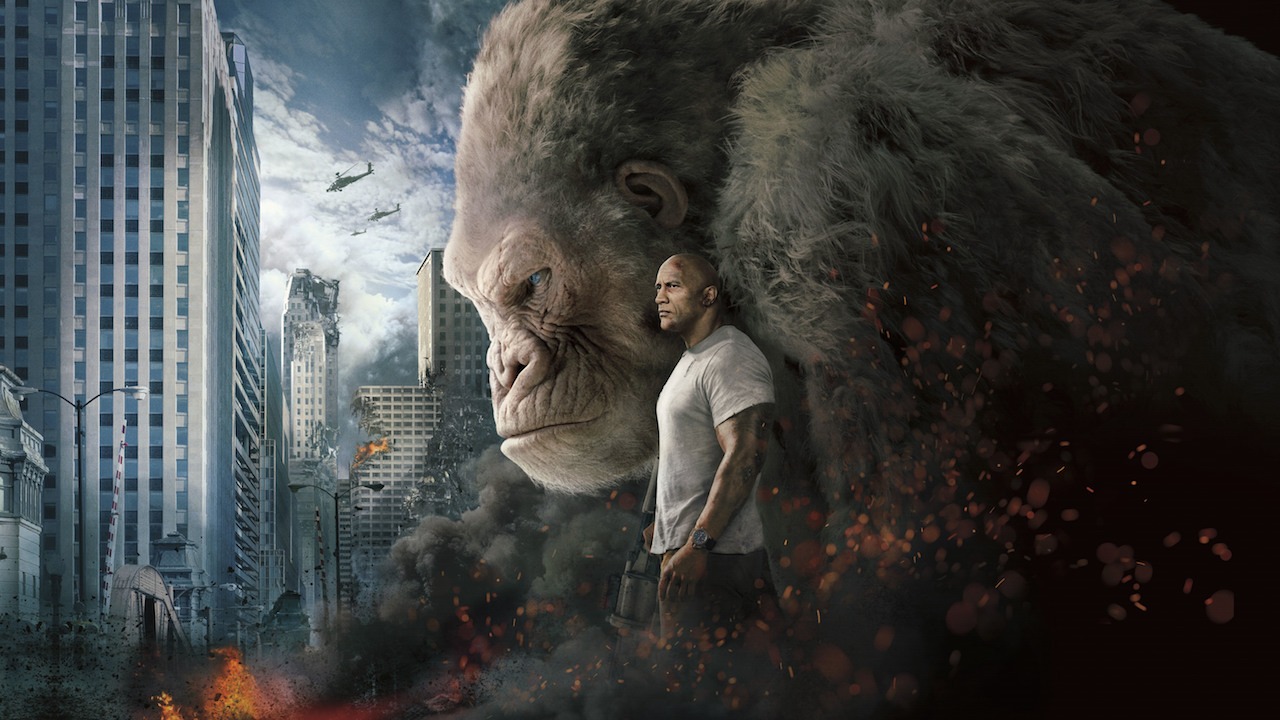 If my 8-year-old self knew there’d be a movie adaptation of the city-destroying monster video game Rampage, I’d probably be in a state of perpetual glee until it was released in theaters. Of course, my 8-year-old self had yet to indulge in the campy cinema candy of the Godzilla franchise or the King Kong movies. Your taste in giant monster movies grows a little broader as you get older and it’s sad to admit that the big-screen depiction of a giant ape slamming a giant wolf into giant buildings doesn’t hold as much excitement as I thought it would. It’s still a pleasing treat for the eyes and will probably be held up by many as one of the few solid video game movie adaptations, even if the destructive scenes seem like mild hurricanes compared to the stellar treatments for Godzilla and King Kong.

Rampage plays itself by the book by keeping its giant monster story quick, expository, quippy, and dumb. A scientific company worth billions has just lost three containers of an experimental gas used for creating weaponized creatures. The gas is unleashed and three animals transform into giant beasts capable of great destruction. The grey wolf Ralph can now munch humans in one bite and soar through the air on his webbed limbs. The crocodile Lizzie grows spikes and probably a few more teeth to decimate vehicles and buildings with a mere whip of her tail. And the albino gorilla George grows larger and angrier, able to conquer any opponent from bears to jets. The nasty company that developed the gas wants to get rid of the evidence and is hoping the military will do its part in wiping out these city-destroying, human-gobbling giants before it’s too late. But, of course, the creature also have increased strength and the ability to heal quickly. There’s a scientific reason given, but does it really matter? It’s just more exciting when it takes more than a fistful of bullets and missiles to tame the unstoppable beasts.

The only one who can calm George down, and possibly match his strength, is his best friend Davis, a Primatologist played by Dwayne Johnson in his most familiar of charisma-oozing states. He doesn’t know much about this gas that has mutated his friend and relies on the ally of Dr. Kate Caldwell (Naomie Harris) to find a cure. Of course, to get to that cure, he’ll have to fight his way through a cocky secret agent (Jeffrey Dean Morgan), a gung-ho military Colonel (Demetrius Grosse), and a sinister seductress of a CEO (Malin Åkerman) with her inept brother/partner (Jake Lacy). Oh, and possibly a mercenary (Joe Manganiello) because why not? All of this adds to the modicum of character Davis is given as being a man that prefers interacting with wild animals over people. You won’t see much of this trait, however, and you’ll just have to take his word on this. There’s no time to develop a character when cities are being destroyed!

Past the intended sequences of destructive special effects, there’s a fair amount of cartoonish fun in the farce of pushing enough exposition through the script before arriving at the film’s centerpiece climax. And yet it always felt slightly held back whenever the film went goofy, as if director Brad Peyton was fearful of stepping into Michael Bay territory while he waded through explosions. Dwayne Johnson is always fun to watch, but seems to be on smile-worthy autopilot with his quick quips and pleasing use of his intimidating muscles. Also, just as much fun to watch is Jeffrey Dean Morgan, but no more than he usually is on The Walking Dead, swaggering into every shot with that cocky smile and a hint of a Southern drawl in his babblings of badassery. I even dug the human villains who are usually pretty docile and stock in these types of movies. Malin Åkerman is always a pleasure to the eyes with her dress and demeanor, as is Jake Lacy in his stammerings and beta personality. I wanted more of them, as Jake seems to have a decent running bit of always having junkfood meals in his hands whenever chatting with his sister. There are even supporting players that seem to get kicked to the curb early before anything fruitful can come of them. I guess we gotta keep in mind who the real stars of the picture are and, no, I don’t just mean The Rock.

The hills and valleys of the film are fairly distinct in when there is and isn’t a monster on screen. When George is ripping up buildings or Lizzie is stomping on soldiers, the movie breathes with that satisfying sense of sci-fi action. When not present, most of the humans drone on in quips most expected, backstories most lukewarm, and exposition most droll. That being said, even the monsters feel a bit held back in the chaos department. Most of their bouts with the military, the structures, and each other comes with sometimes random and stand-offish nature. Again, fearing the Michael Bay route, Peyton literally pulls back his camera so we can see everything the monsters are doing to the city with plenty of wide shots. All the window smashing, building tipping, and car flipping just doesn’t feel as impressive when viewed at a distant. The closer shots reveal a more exciting picture where the special effects and soundtrack can swagger as much as Jeffrey Dean Morgan.

Rampage isn’t so much disappointing because it’s popcorn entertainment but because there are hints of a more playful picture that you want to come out into the sunlight and bulldoze convention. The film finds a little bit of that groove towards the climax where the deaths become sillier and the quips become more knowing. Perhaps Dwayne Johnson’s greatest line involves his take on the wolf creature being able to fly: “Of course the wolf flies.” If only the rest of the film could have been that gleeful with its self-awareness of the genre to have some more fun. A little boost of the absurdity could make that 8-year-old inside me come out again and geek out over the battle of ape versus wolf versus crocodile. At least the director had the audacity to include a Rampage arcade cabinet in the villain’s office. That kind of loving nod to when the Double Dragon movie pulled a similar Easter egg is the kind of cornball goodness I want to see roar in a movie this big and dumb.