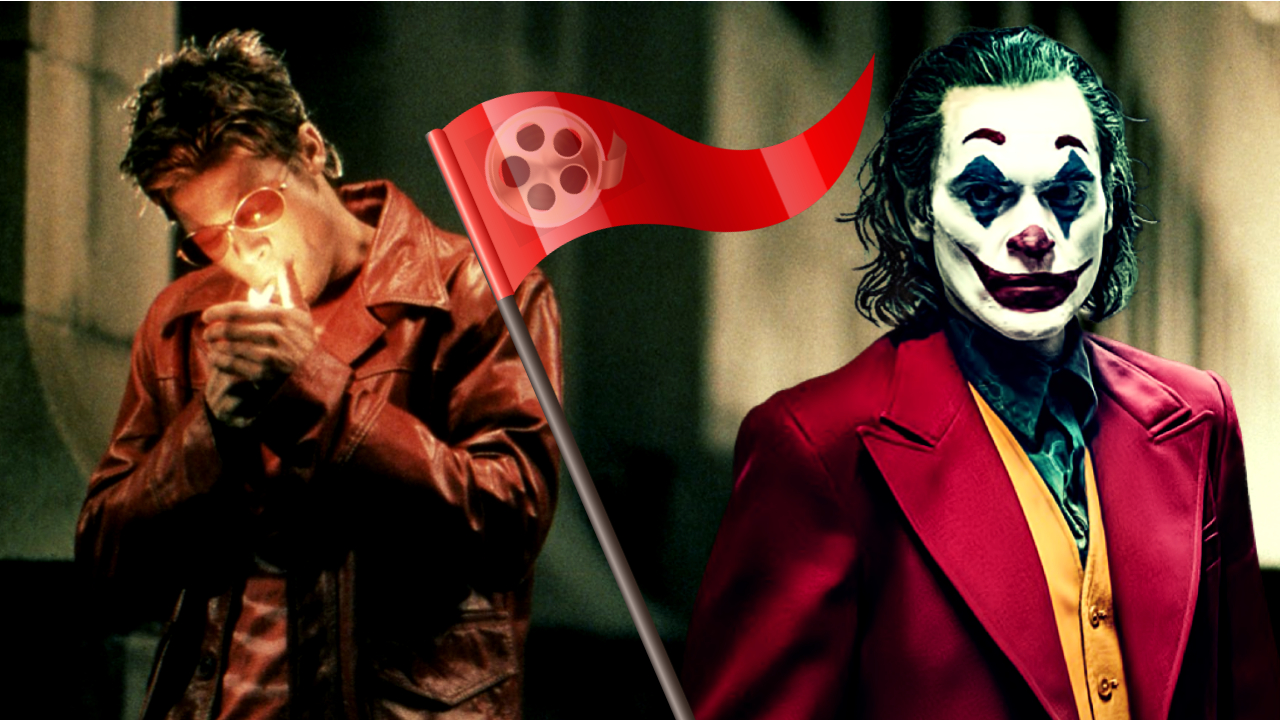 Over on a certain social media website a certain user made a post there about red flag movies; movies where if you see someone cite them as their favorites or have them in their collection, you should interpret that as a warning sign of their personality. Though the post had posed the question of what were green flag movies, everybody hopped on the red flag movie portion because the examples given were Fight Club and Joker.

Those who are new to this level of online film discourse or were unaware of it kinda stared at this post perplexed. For citing Fight Club and Joker as red flag movies, the post was met with a mix of confusion and anger.

I suppose it should be noted first that I personally do not immediately call a red flag based on someone having Fight Club or Joker in their home video collections or list of top movies.

For starters, the mere presence of a film in somebody’s collection does not tell someone a full story of their movie-watching habits or personality. They may like that film or they may not have gotten around to getting rid of it. They may understand the thematic elements or they may not. They may have even just bought the film on a whim and haven’t even watched it yet.

Fight Club was, after all, a very common DVD when the format was rising. I was a teenager in the early to mid-2000s and just about everyone I knew owned a copy of that best-selling DVD. Not quite sure how common Joker would be in somebody’s video library but chances are relatively high considering it was a blockbuster film.

A list may be more telling of what that person thinks of that film but may not tell the whole story. Some people go into little detail about the films they have on their list of favorites. And sometimes they go into no detail. They might just have Fight Club or Joker in their top 10 and the reasons why maybe for a variety of reasons.

So how did Fight Club and Joker come to be seen as red flag films?

Part of this declaration has come as a sort of shorthand from how online discourse has shifted the discussion of film.

Fight Club is a satire of masculinity in modern times. Edward Norton plays a nameless character who befriends Tyler Durden, a macho instigator of the secretive fight club. Tyler at one point makes a speech about how men are not living up to their potential in such a capitalist system and that they need to lash out for being so pissed off. It becomes clear that Tyler is leading Norton’s character through a cult of men being men right up to the point of rationalizing the terrorist cell of Project Mayhem.

Many online discussions, however, have found that this narrative is misinterpreted. It should seem obvious that Fight Club is meant to be cautionary of how old forms of masculinity clash with modern society in a concerning way. And yet several people have misread the film as being an argument for rejecting modernity. In other words, a handful of viewers listen to Tyler Durden’s philosophy of rage and destruction as correct.

This runs counter to most readings of the film, as well as the intent of the director David Fincher. But that apparently didn’t stop a whole slew of viewers from getting the exact opposite message from the film. They used the film to reinforce their belief about how the world should go backward instead of forward.

Part of the blame for this view of the film is how the picture is posed. On a narrative level, yes, Tyler is clearly the villain but in terms of framing, he is also the coolest and wildest character. While Tyler is an aspirational aspect of Norton’s character’s own id, he is perhaps presented as almost too aspirational for someone who really does want to believe that men should beat the shit out of each other and go back to olden times.

Joker has similar problems but is even less defensible. The film takes place during the 1980s and concerns the struggling clown of Arthur. After losing his job and his mental health declines due to lack of treatment, he finds himself killing the rich while seeking answers to his lineage. Arthur’s mind continues to descend further and further into his own narcissism until he puts on the Joker makeup and shoots a talk show host.

Joker, much like Fight Club, can be viewed as a cautionary tale but the framing, just like Fight Club, became even more concerning. It’s not just that Joker is posed as cool or that his nihilistic approach to life resonates with the wrong crowd. Arthur is not just posed as some poor young man who is fed up with the world but a mentally ill individual who was refused help.

One who wants to strike out against society may adore the line about Arthur’s declaration about “you get what you deserve” when committing his televised murder. But this type of framing seems to suggest that if mental illness is not properly treated then mentally ill people come to kill you. That’s some pretty dangerous rhetoric and it’s just one of a few key reasons why Joker is not as widely revered as Fight Club.

My experience with discussing Joker online in various forums has essentially gone something like this. Someone praises the film because it was far different from other comic book movies and that it said something important about society, how class struggle devalues an individual.

Well, which is it? Does the film say something about society or is it just entertainment we don’t need to think that hard about?

Due to this misreading of such popular pictures, the internet has created a shorthand for this type of person: Film Bro. A Film Bro is commonly recognized as someone who considers themselves a film nerd for having seen a lot of movies but really only has surface-level understandings of what films are trying to say.

It’s the type of person who would watch Taxi Driver or A Clockwork Orange and view its central characters not as cautionary figures but instead aspirational heroes who make insightful points. It’s not Travis Bickle who is at fault, they may posit; it’s society’s problem.

For those who have encountered so much of this misinterpreted discourse, it can be easy to mark Fight Club and Joker as red flags if you see them in somebody’s video library. The important aspect, however, is figuring out why someone owns a particular film.

Not everyone who owns such films harbors these toxic observations. One of the most popular VHS tapes of the 1990s was Independence Day but not everyone who bought that tape believes in American exceptionalism and imperialism.

That being said, one could be forgiven for assumptions based on patterns in movie preference and films like Fight Club and Joker don’t need to be singular red flags. Rather, they can act more like clues to somebody’s personality.

For example, if somebody has a very extensive home video collection of various types of films, with Fight Club and Joker being among them, there’s probably not as much cause for concern. If their video library is small, however, and the only other films you see are titles like Taxi Driver and Death Wish, those could be considered red flags.

Consider the way you would view somebody who has beer in their fridge. One can or a six-pack of beer may not mean they’re an alcoholic. It’s only when you start seeing an abnormally high amount of beer that you may question if this person has a problem with alcohol.

You’re not an alcoholic if you have a beer or two and you’re certainly not a Film Bro if you happen to like Fight Club or Joker.

Look, we all have red flag movies. There’s always going to be some movie that others like that make you raise an eyebrow and start forming assumptions in your head. But it’s important to take a step back to not only question why such a person likes that film or how it resonated. To be charitable here, there’s a bigger force at play here.

Film Bros didn’t just pop up from the ether and start randomly proclaiming Tyler Durden as their idol. They had their worldview shaped by a variety of factors in their life with media consumption being one of those components. It would be disingenuous to place all blame for these attitudes and surface-level takes on a handful of movies, most of which are great for reasons outside the Film Bros lens.

Amber Rawlings wrote more about this aspect in her article “I Met a Film Bro” where she states:

“The Film Bro didn’t invent himself, the industry did. If we want them to go away, we need to look for answers higher up.”

To sum up, the mere preference of Fight Club or Joker doesn’t make someone a Film Bro. It’s when that preference comes bundled with an uncomfortable conversation about Tyler and Joker being revolutionaries that the crimson flags will rise.