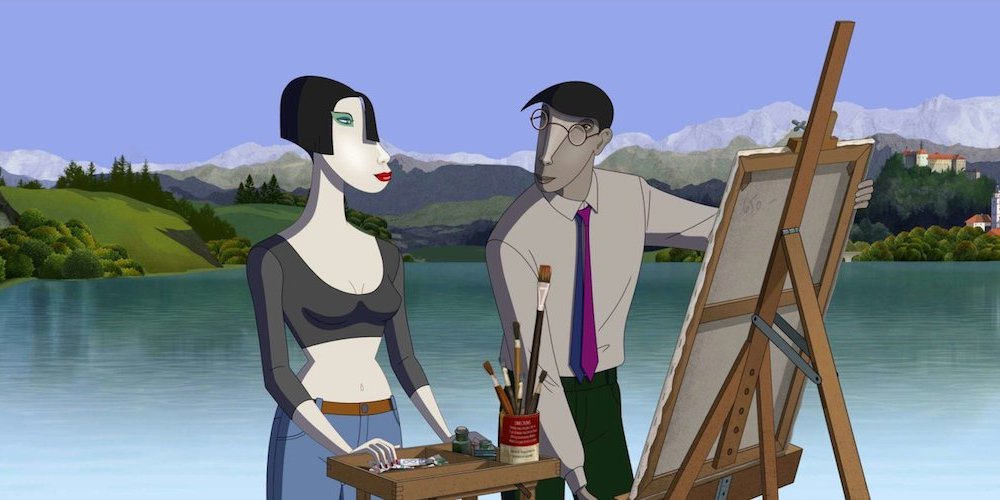 The world of Ruben Brandt is as odd and surreal as the titular character’s thoughts about conquering fear. He believes the best way to make the nightmares cease of famous paintings haunting his visions and killing him in his dreams is to steal the paintings. It somehow makes sense to Ruben about as much as anything else in his wildly artistic world that already appears as paintings come to life.

The design of this film is astounding not just for the artistic flair of transforming exaggerated and abstract designs into a living world. There’s a very disorienting nature that adds to the surreal nature, where we’re just as unsure and frightened by Ruben’s visions for blending seamlessly with his own reality. We can’t be too sure what is his own reality if there is indeed a reality at all. Sure, Ruben’s nightmares are a little more notable for featuring famous painted icons but how can you be that sure when his regular world is populated by people with three eyes, two faces, two-dimensional frames, multiple lumps, and varying levels of movement?

Ruben just happens to be in the right business for pulling off this painting heist. He serves as a psychologist for criminals, more concerned with helping them conquer their inner problems than the bigger issue of breaking the law. For example, one of his clients is a man who could stand to lose a few pounds while he is cracking open bank vaults? But how can he be too fat as one of the few people of this world that is as flat as paper when at an angle? Such questions are never directly answered, adding to the delicious oddities of this world that never slows down within its caper plot to explain why everyone looks so strange. To do so would ruin the gravitas of the film’s peculiar nature that manages to pull off an uneasy sexiness of a crime story amid its many mutant character designs.

One such thief Ruben is closely associated with is Mimi, a seductive criminal that specializes in art thievery. She is an expert in her field but still needs to keep one step ahead of the pursuing detective Mike, committed to the chase but not above enjoying the hunt. Mimi needs to up her game considering Ruben’s plans involve stealing some of the most priceless works of art on the planet. But even Mike isn’t prepared enough for the major twist behind who he is pursuing and how his own past is tied to Ruben’s troubled nature.

The film has an elegant and intelligent edge to how it weaves its crime caper of great artistic flair. There are plenty of lavish and stylish set pieces, from sexy villas of Europe to an action-packed car chase, complete with gunfire and helicopters. Sometimes the animation has clearly designed figures of great color and dimension, while other scenes feature abstract figures with distorted bodies or sometimes (a disembodied hand plays jazz piano while a singer with an off mouth sings). While its surface tale is that of a simple caper, there are grander themes of art’s impact on the mind and how nostalgia plays a heavy toll in our mental perceptions of the world. And so the film exists as a stark example of how animation can heighten the familiar heist genre with the same level of smarts, punched up with some of the more experimental and unique uses of the medium. Ruben Brant, Collector serves as a prime piece of animation most mature and sophisticated, even for one that ends with an explosive car chase.