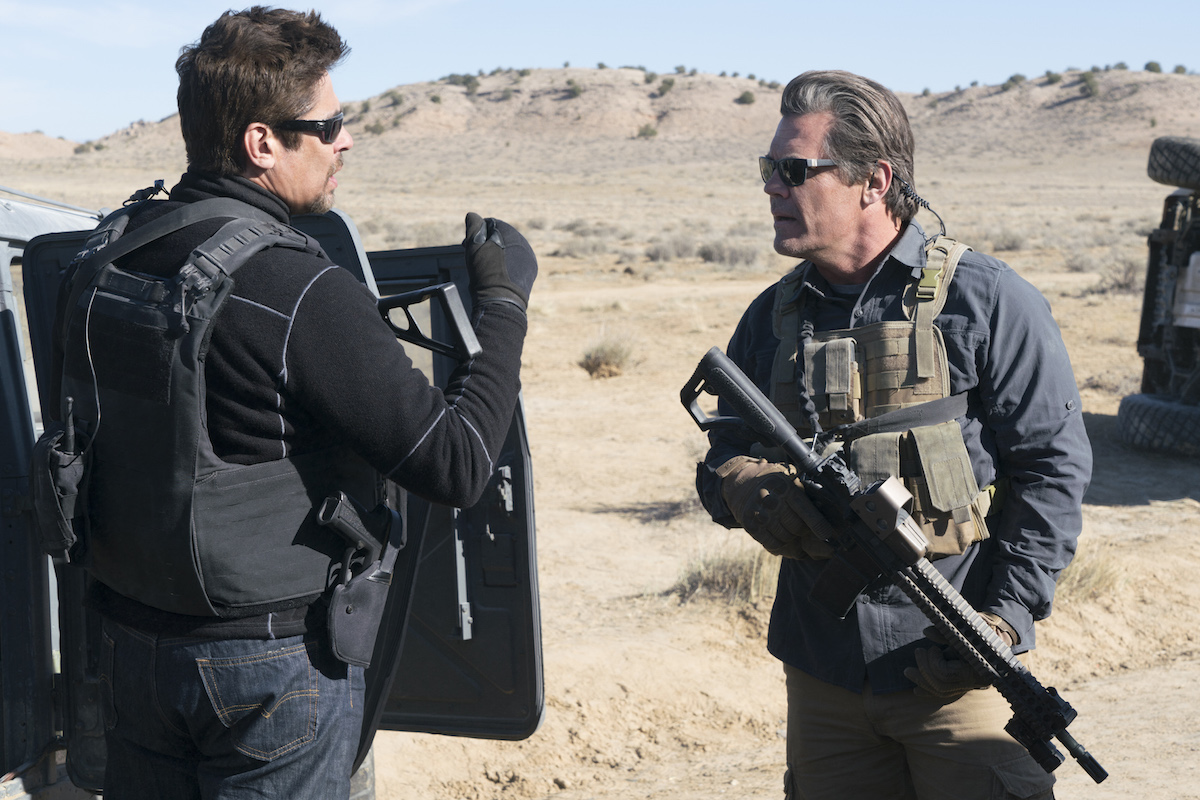 The second helping of the sour world of Sicario comes with an extra spoonful of darkness for a cartel war that will never end. That’s all good, in the film’s own depressing way of luring us in with its bloody and bony following-finger, but there’s something missing. It could be the skillful direction of Denis Villeneuve that contributed to the atmosphere of brewing intensity. It could be the loss of Emily Blunt as the morality that is chipped away as the war wages on. The lack of that extra oomph in the ouch turns Sicario: Day of the Soldado into a thriller that shouldn’t feel so standard for being so contemplative and brooding.

The dirty duo of CIA agent Matt Graver (Josh Brolin) and undercover operative Alejandro Gillick (Benicio del Toro) take on another mission of Mexican cartels with firm emotions and loud weapons. With a surge in terrorist-related threats stateside, the war on drugs is in need of some new tactics. Graver is called upon for the strategy of making the cartels destroy themselves by staging the kidnapping of a boss’ teenage daughter, Isabela Reyes (Isabela Moner). With Alejandro’s skills of impersonation and intimidation, they concoct their operation with a certain intricacy to appear as sloppy as a cartel operation. Or so it would seem as their plans go south quickly and the narrative changes with betrayals, secrets, and bloody escalation.

Brolin and del Toro are in top form, despite nothing all that new to their characters for their return. Brolin’s character is still one of hard-nosed grit, going the extra mile as the dirty CIA agent who delivers his cruelty with a stiff lip on his massive jaw. His first scene features that ease of being vicious when torturing a Somalian, threatening and delivering on his devotion to killing families for crucial information. Benicio del Toro also doesn’t have to try too hard to put on that dread-inducing look of a man lost in his work of blood and bullets. You may recall his character took revenge on the cartel operators who killed his family, killing their families in return. He’s already taken that deep plunge into the darkness and if you think the innocent Isabela will change his ways, you’d be wrong, despite the emphasis the movie puts on their relationship.

I’m almost grateful that Alejandro’s revenge-riddled heart didn’t grow three sizes that operation as the film slips and slides too close to a thriller simpler with its scum. The mission is eventually simplified to the safe passage of Isabela across Mexico and becomes a brutal building of tension about how far Alejandro can escort her without getting caught and killed. I could feel the film trying to simplify itself after its staging of Islamic terror, immigrant smuggling, and cartel politics is swept from contemplation after jumping into a loud and explosive attack on a CIA convoy. Not that there’s anything wrong with a good double-cross amid missiles and artillery but such a spectacle seems almost out of place, belonging to a more solid action film than an introspective one as Sicario.

But I’ll give the film credit for still charging into its amped up violence while trying to keep that frightening tone of justice gone grim. It’s hard to not be a little impressed when Alejandro takes aim at an enemy on the ground and tosses him his glasses, letting him live long enough to see his face before unloading a fast amount of ammo. A revenge-fueled assault on a cartel convoy has some great staging of helicopter forces versus car-bound gangsters. There’s still that familiar sense of how tragic it is that the violence will continue without an end but you’ll have to listen closer this time to hear past all the gunfire and explosions.

While Day of the Soldado is still impressive and the remaining characters still have that alluring nature of lawless anti-heroes, never excused or celebrated outright for their cruelty, there’s a bitterness to its blend of realism and action. With the previous film’s inclusion of Emily Blunt, the war felt like a three-way battle of lawful good versus corrupted evil versus corrupted good. Now it’s just corruption versus corruption and the film’s only innocence of Isabela is reduced to a mere victim and pawn in the greater scheme. All we can do is sit back and watch the dance of two forces become a mess in the tangled web of drugs and politics. And while they have a few enticing moves, the uneasiness of its contemplation becomes a bigger pill to swallow, as the music pulls double duty with dread to prevent the film from becoming as messy in tone as its Murphy’s Law world. I thought back to Sicario and how it ended with a gunshot that only briefly halts a soccer game before life goes on. It stuck out in my mind for how horrific a situation had been created. Day of the Soldado ends on a similar note but carries a lesser weight, better built for staging a sequel than a message. And a world so depressing as Sicario is not exactly one I’m so eager to flock back to if its gone this dark and lost its minor moral base.