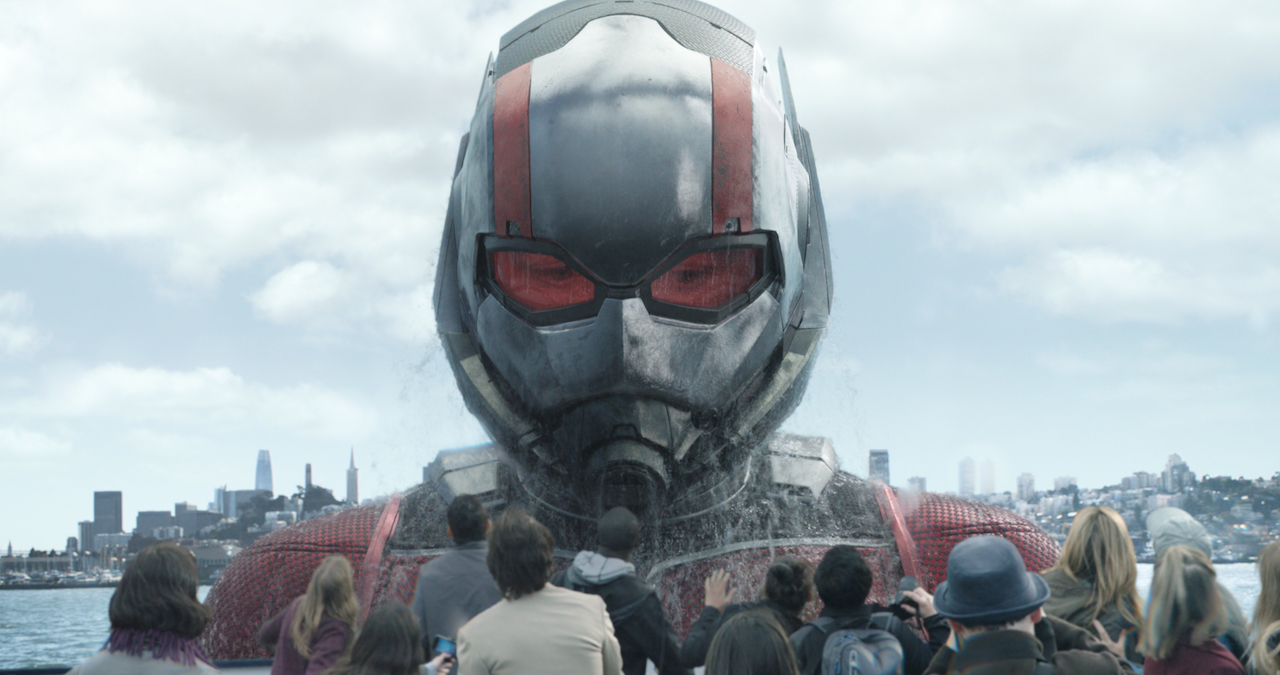 This is exactly what I needed. After the dense cultural aspects of Black Panther and the darker pathos of Avengers: Infinity War, there’s a refreshing break from the bleak with Ant-Man and the Wasp. There’s no painful conflict of a father trying to be a hero, nor a hugely tragic villain of messy plight for him to best. It’s just a light and bright spectacle of a summer blockbuster that has fun with its size-altering heroes and phase-shifting villains. You remember what fun was like in these movies, right? Before half the universe died in that last Marvel film?

When we last left Scott “Ant-Man” Lang (Paul Rudd), he was battling alongside Captain America in Civil War and more or less lost the fight. Why he decided to bunk off to Germany with the expensive suit of Hank Pym (Michael Douglas) is never fully stated, as director Peyton Reed attempts to mop up exposition for where Scott is now. Having been arrested by the American government, he’s placed on house arrest and it seems to be working well for him. He’s given up being Ant-Man, gets to spend cute moments with his daughter, has a security business run by his former security-busting partner Luis (Michael Peña), and only has a few more days to go before he can leave his house. Things seem to be working out for the former vault cracker.

As for Hank and his daughter Hope (Evangeline Lilly), things are not so great. Not only are they on the run from the law for being considered criminals in association with the rule-breaking Ant-Man but they’re struggling to build a quantum portal to a subatomic universe. You may recall Hank’s wife was lost to this microscopic world decades ago, theorizing there was no way to leave it. But if Scott could make a quick trip to the trippy world of otherworldly atoms, surely a seasoned professor and his well-trained daughter can do it as well. They can do it, but not without the interference of outside forces.

There’s a swarm of villains present, each with their own goals for that sweet quantum gold. Shady and wealthy weapons dealer Sonny Burch (Walton Goggins) views this technology as actual gold and wants the profits it could be worth. FBI agent Jimmy Woo (Randall Park) wants the Pyms behind bars before their technology can cause any more damage in an already chaotic world of heroes and villains. And the obligatory costumed evildoer Ghost (Hannah John-Kamen), afflicted with the powers of quantum-phasing abilities and is hoping such tech will let her retire from a life of crime and working as an invisible operative.

Much of what made the first Ant-Man so pleasing is again present and without any major changes. We still get a load of cute moments between Scott and his daughter, keeping the film’s focus of family in clear view at all times. It also comes just at the right moments, as when Scott is held hostage and convinces his hostage-takers to let him face-time with his girl over the phone. Luis once more gives us the scoop on situations with his Edgar Wright style manner of explaining stories, this time juiced up with truth serum to make him spill more beans at a faster pace. And there’s more subatomic universe trippiness that turns so bizarre in its Fantastic Voyage staging that I almost expected Doctor Strange to make a cameo.

The action also remains a brilliant spectacle of shrinking and growing of both Ant-Man and Wasp. It’s still a lot of fun watching Scott ascend to a giant size to kick around cars and even more entertaining to watch Hope fly around a kitchen as she shrinks and expands, scaling tossed butcher knives and punching out gangsters while remaining the size of a dragonfly. These scenes also make a strong case for existing in 3D, a gimmick that usually falls flat in many films. Here the 3D is a lot of fun without being too obvious in built-for-3D shots, making the smaller scenes of great scale and long depth of field feel grander and more immersive. The only downside is that I couldn’t help but feel as though Ghost’s phasing abilities were merely the result of the poorly calibrated film.

Because the movie is kept so fast and energized, we lose a bit of what could have been better explored. If you were thinking this film would be more about Hope playing Wasp, as teased in the previous Ant-Man stinger, you may be dismayed to discover that she’s still in a bit of a supporting role, despite eating a heftier portion of the badass action scenes in hero-suit attire. There’s also an emotional edge of family that doesn’t feel as fleshed out for the relationships of Hope and her mother, Hank and his wife, and Ghost and quantum professor/caregiver Dr. Foster (Lawrence Fishbourne). You’re also going to have to switch off a few brain cells to not question how a tiny car wouldn’t be damaged when making ridiculous jumps or how Luis is so easily able to shift in and out of sizes with the incredible shrinking Pym-mobiles.

If you’re wondering if any of this self-contained caper crosses over with Infinity War, rest assured it does and makes more of an impact than just a passing mention. But for 99% of the film, it’s a sweet and gentler side of Marvel Studios. Heroes are classically charming and heartfelt, the villains are campily bumbling, and the intent of all involved carries a nobility, despite how little of it is fully showcased. Think of it as a warm blanket and hot cup of cocoa after the trauma of watching your favorite heroes turn to ash. Ant-Man and Wasp are here to remind us that there are still good-natured films in this franchise that are not all dark, gritty, and bitterly allegorical. Some of them just want to have fun with a tiny man riding an ant.