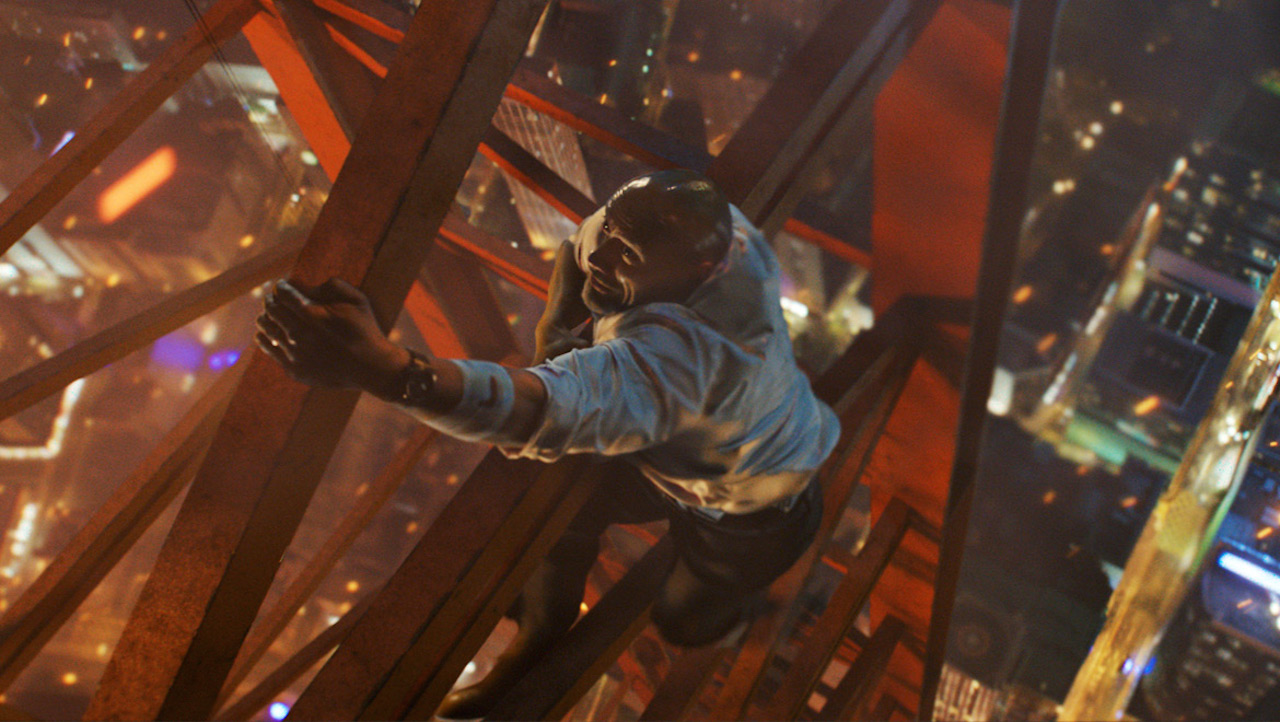 There I was in the theater watching Dwayne Johnson edge across a towering inferno, hundreds of feet in the air, and I’m not feeling that familiar giddy charm and thrill he exudes with nearly every action performance. Everything is present for a popcorn-chomper of Dwayne’s Die Hard, from a foreign-accented terrorist to daring stunts that leave Johnson as battered and bruised as John McClane. It should have been a light bit of brainless summer action but casual passivity of the structure left me wanting, especially as Dwayne gets lost in the dust of the flashier sequences, existing as more beef than brains.

Johnson seems far too subdued in the role of Will, even if he is playing a character with a backstory darker than most of his roles. He is a former FBI operative that lost a leg in a hostage situation. 10 years later, he has a new artificial leg, a wife (Neve Campbell) he apparently met during surgery, two kids, and a fancy job as a safety inspector. His latest assignment is at the largest skyscraper in the world, built in Hong Kong by a wealthy industrialist (Chin Han). It sure is a nice building with commercial levels, residential levels, self-sustaining energy generation, and plenty of high-tech bells and whistles. It sure would be a shame if some gruff villains decided to, say, set it on fire and lock all the exits. And it’d be an extra shame if Will’s family were locked inside as well.

All the action beats arrive on schedule. The head terrorist (Roland Møller) wants a MacGuffin in the tower, willing to toss Will’s kids off the building to have it. A slick-haired, tightly-dressed female terrorist (Hannah Quinlivan) is also present, ready to shoot the hired hacker for the job when he finishes his duties and states nobody else can shut down the system but him. An observing detective on the ground will struggle to piece the story together. A sniveling English investor (Noah Taylor) will take the easiest and greediest way out of the situation. Elaborate construction of the skyscraper’s projects are built specifically so our hero must dash through a wind turbine and do battle in a hall of mirrors.

It’s all there and while this makes the film sound like a fun and mindless romp of destruction, there’s something missing. Considering Johnson has a charm that can engulf a production like a supernova, it’s disheartening to see him without as much fun stuff to say as there is to climb and kick. Sure, I liked watching him cling the windows with little more than duct tape preventing him from falling to his death, as well as watching him sprint off a towering crane and into the towering blaze. But I know he can do that; just look at the guy and his treetrunk arms that literally lift a bridge in this movie. I also know he can do better, even for something as simple as a silly summer affair. He needs some better material in between using his bulk to best bad guys. I doubt many are going to be quoting Johnson’s throwaway line on the importance of duct tape in the same light as Bruce Willis’s many memorable quips in Die Hard.

Without that eyebrow raised and toothy smile in check, I regret to stroll down the path of questioning story elements I really shouldn’t be deciphering. I couldn’t help it when Dwayne seems unusually calm and docile throughout the exposition-heavy first act that slogs through setting everything up. Here’s a virtual reality room; remember that for the climax. Here’s a repeated solution for resolving smartphone issues; remember that for the scene where Neve has to shut down the fire-suppression system to save her husband. After that act, the questioning began. For example, how did Neve Campbell become so adept at fighting as her husband? Don’t get me wrong; it’s a surprise and a treat to watch her stab and kick terrorists but it’s a surprise that makes you question where it came from. She must’ve taken some mean self-defense classes in her ten years since marrying Will. Or before. We never know for sure. What we do know, eventually, is who the terrorists really are and what they want out of the tower. And once we learn the explanation halfway through the film, it’s so bland I wondered why they even bothered explaining it at all. Forget that jargon of hacking software and offshore accounts; give me a fun backstory on Neve’s road to badassery!

Despite the dizzying heights and plentiful plumage of fire, Skyscraper is rather safe, even by the low standards of summer shlock. It sets out what it promises to do but no more than the bare minimum. You will see the family scurry through a paradise gone to hell but only for the section of the tower that appears to be lifted from Jurassic World. You will see fast and intense gunplay with gritty villains, including a comical falling death with an active grenade. And you’ll see plenty of Dwayne Johnson flexing those biceps as he grips walls and gets into brutal battles. I just wish he could flex those charm muscles a little more and not be overwhelmed by the special effects that reduce his character to little more than forgettable action banter. Considering how hot he is as a movie draw, he can do better than standard Die Hard retread.