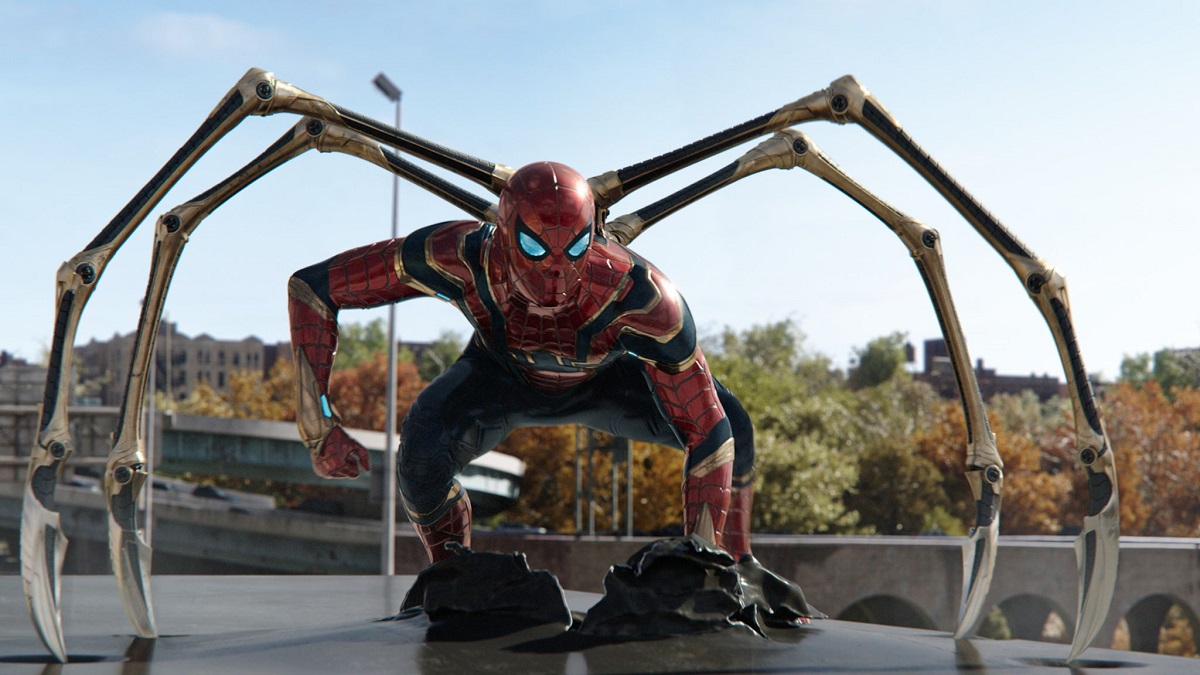 No Way Home has a little bit of everything for a Spider-Man movie. It takes Peter Parker in a unique direction, having had his identity revealed in the previous film. It finds more seriousness and pathos that are perfectly suited for the plucky superhero. It also manages to play around with much of the Marvel lore and Spider-Man mythos. For being branded as a return of old faces, such a picture could’ve easily turned into little more than a reunion special. Thankfully, that is not the case as Peter Parker finally gets a fitting end to his own trilogy.

The premise is intriguing right from the start considering the bomb that was dropped at the end of the last movie. Mysterio managed to not only blame Spider-Man (Tom Holland) for the violent drone attack but also revealed his true identity, via J Jonah Jameson (JK Simmons) going the Alex Jones route with the Daily Bugle. So now Peter is out of the Avengers closet and it’s not as easy an admittance as it was with Iron Man. Peter’s still a teenager and he intentionally hid his Spider-Man identity from others to protect them. His secrets seem justified when his life becomes more chaotic for all those around him, including his current caregiver of Aunt May (Marisa Tomei).

Without giving too much away, No Way Home focuses hard on the concept of sacrifice to save others. It’s that whole “with great power comes great responsibility” mantra most associate with the character but given some extra gravitas for this particular Spider-Man. There’s a moment where a character actually does use that line and it feels like it comes at the most important moment rather than just being a foreboding piece of advice. There’s a price for misusing power and Peter learns this the hard way when tapping Doctor Strange (Benedict Cumberbatch) for some mystical help with his situation.

But the film is also about teamwork. Peter’s closest friends of his girlfriend MJ (Zendaya) and his geeky pal Ned (Jacob Batalon) play a unique role in the superhero’s battle to save his dimension from more villains. He initially wants to keep them at bay in hopes they won’t become collateral damage but learns that he can also count on them for support. One might think that Peter learned such lessons from the Avengers but it’s a harder concept to grasp when those closest to you might be in danger. He learns these lessons about his private and professional life the hard way with some rather dark turns and bitter realizations.

Of course, a big draw for the film is going to be inciting incidents of the multiverse leaking through Spider-Man characters from other franchises. I dare not reveal such cameos but as some of the trailers have noted, not all of them are specifically from the Marvel Cinematic Universe. This aspect is unique but it does go a bit into reunion special style comedy when trying to connect the dots. Conversations turn meta about which universe was better and how each world differs from the superhero contacts. There’s also a lot of in-jokes in the dialogue and actions which draw on two decades of Spider-Man movies.

That being said, the film does find a solid theme to center around the culmination of cameos. Spider-Man actually tries to reform himself and not just be the superhero known for slaughtering the villains like every other superhero. That chipper and forward-thinking nature of Peter comes across brilliantly as he tries to seek a better way to resolve issues. This growth for the character also finds Peter becoming more independent as he doesn’t rely completely on the inherited Stark Technologies to solve all of his problems. By the end of the film, Holland’s Peter Parker feels more realized and perhaps closer to the comic book version, where the teenager was more of a plucky thinker than a high-tech teen trying to hide his advanced toys.

This film is sure to draw some comparisons to the animated film Into The Spider-Verse for having a similar premise. This picture isn’t quite in that same vein of stylish surrealism and wicked wordplay but toppling such a towering Spider-Man movie seems like a tall order (though the mirror dimension battle between Doctor Strange and Spider-Man is certainly a visual highlight). Where the film succeeds most is how it plays with its own Spider-Man lore and takes the many characters and arcs in new directions. It doesn’t just feel like another cage-rattler for more of the multiverse that keeps spilling out in every MCU movie and TV series.

With an abundance of characters and compelling arcs, No Way Home is the Spider-Man movie the fans have been waiting for. Sure, it does dabble in a hefty dose of the nostalgia with its favoring of the franchise favorites, feeling like the most blatant of nostalgia-bombing Marvel movies. But there’s still a strong story present about your friendly neighborhood Spider-Man trying to grapple with what it means to be a hero when you have so much to lose. It’s the most mature Spider-Man movie to date and that’s worth a heck of a lot more than the introduction of the multiverse to these movies. As much of Marvel Studio’s Phase IV has proven, there’s plenty of room in the MCU for more than the same old character tropes and the familiar theatrics of gags and stunts. It’s surprising just how fresh this film feels for essentially going back to the basics of what makes Spider-Man such a great superhero.

One thought on ““Spider-Man: No Way Home” Review”