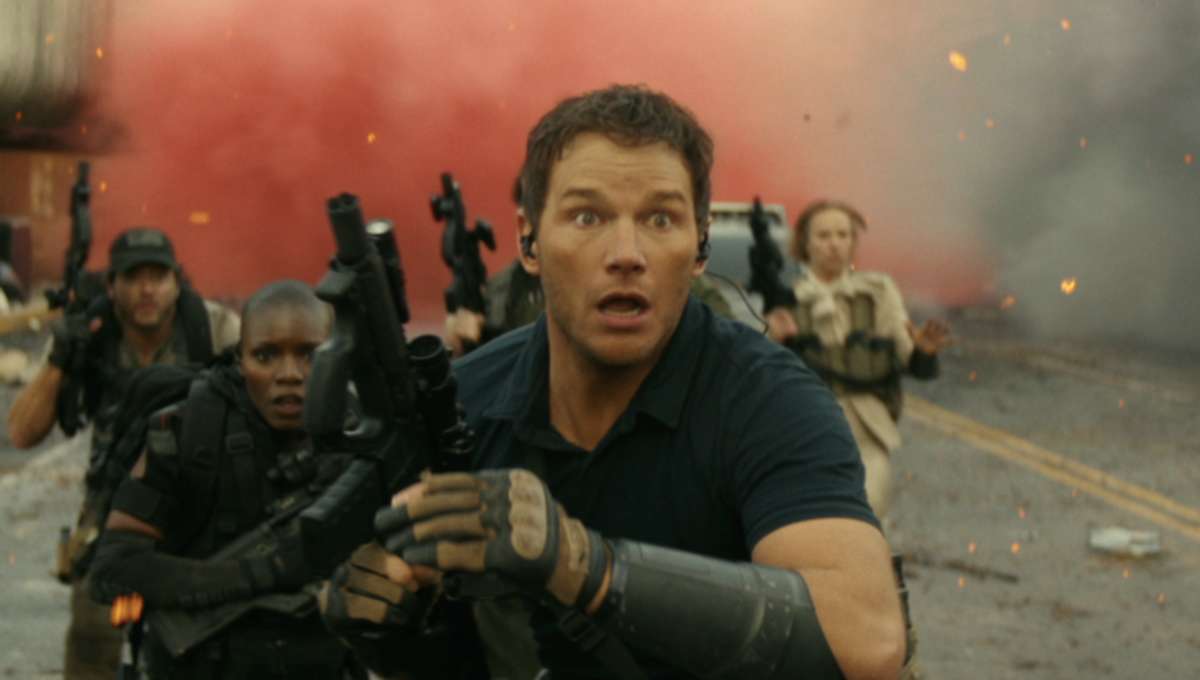 2021’s The Tomorrow War is a fairly generic and frankly forgettable alien invasion movie. Mysterious aliens ravage Earth in the future and humanity sends back soldiers to retrieve people from the past to aid in the war effort in the future.

Chris Pratt plays Dan Forester, a military scientist who is sent forward in time to study the creatures and find a way to wipe them all out. There are the emotional tethers of him trying to connect with his daughter and reconcile with his father. This personal drive is very surface level, however, as most of the film involves the running and gunning of aliens who want to eat us.

It’s a pretty by-the-numbers alien invasion blockbuster, though I don’t know how much of a blockbuster it would’ve been considering Paramount dumped it on Amazon Prime, not even getting a Paramount+ release.

What caught my eye most in the film was the response to this alien invasion and the war effort.

The people of the future recruit people from the present to aid in their war effort and this leads to heavy losses in the population. Reasoning that this war must be won, global governments enact a military draft where civilians are thrown into combating the aliens with little to no training. Very few return from the future and those that do undergo the worst cases of PTSD. Feeling hopeless, the public starts arguing why they should even be fighting this war when losses continue to mount.

I kept hoping that there was some twist, some ulterior motive for these time-travelers that would make the story more interesting and perhaps more exciting. But, no, they’re telling the truth. Aliens are not only coming to kill us all but the only thing that can stop them is military intervention and some science.

Despite my dashed hopes of a sci-fi twist, I didn’t expect the film to really address the issues of war. All of these aspects are treated less like narrative focus and more like background noise. This is pretty common for alien invasion movies, considering that most of them are posed as war pictures. They not only betray the aliens as mindless brutes that want to destroy our planet but also glorify the military that will combat them.

Of course, this formula doesn’t apply to every alien invasion movie. Every now and then we get something a little more divergent, such as the horror aspects of Signs or the romantic comedy of Save Yourselves. But for the most part, big-budget alien invasion movies taking place in modern settings generally follow the format of a war picture.

Perhaps the most obvious template for this type of film is 1996’s Independence Day. Aliens come to Earth, they blow up a bunch of stuff, and a band of plucky Americans working in or with the military is able to destroy the creatures and their floating death discs.

If you compare The Tomorrow War to Independence Day, you’ll notice how many common boxes it ticks.

The perspective of this war on aliens is exclusively shown from the view of Americans. With Independence Day, we only follow the stories of Americans, either as civilians, political figures, or soldiers. Sure, this fits in with the theme of the film being centered around American patriotism, but the brief scenes that take place abroad showcase outsider countries as being helpless and waiting for the Americans to come. The only bit of dialogue we get from outside America is the United Kingdom’s military getting all giddy that the Americans finally got off their asses and gave them a military strategy.

In The Tomorrow War, almost the entire plot to stopping the aliens takes place in Miami and international responses to this war for the planet are conveniently kept in the background and rarely spoken of in conversation. There’s talk of unrest at the borders and global riots but nothing really engaging with how other countries are trying to tackle the alien threat. To keep the film more individualized, we rarely hear anything other than a public reaction to this global threat and no government response.

Another familiar aspect is the glorification of the American military, which isn’t too much a surprise considering that any big-budget film that wants to feature American military sets and footage requires review by the Department of Defense. If your film is not showcasing a favorable depiction of the DOD, they can refuse to allow your film access to such assets and funding.

Both films, however, feature underdog scientists that will save the day but said scientists are only able to accomplish this job because of military involvement. The scientific response, however, is only reserved for the third act of the film as the lead-up to the breakthrough in stopping the aliens is saddled for more action.

Also, while the DOD is seemingly off-limits for scrutiny, other government figures are fair game. Independence Day features a politician who stupidly keeps crucial secrets from the American public and The Tomorrow War features a cartoonish politician who can’t be bothered to entertain theories abound stopping the alien invasion before it starts, caring more about his public perception than anything.

This framing is to stress that the military has a better idea of how to handle global threats than political leaders. The Tomorrow War actually takes this one step further by briefly considering bringing evidence of their discovery of the aliens to the United Nations but decide to take the matter into their own hands rather than deal with the bureaucracy of such a process.

There is at least a little bit more intrigue in The Tomorrow War when it’s discovered the aliens arrived as weapons on a crash-landed spaceship. The crew of the ship is found dead, however, and the humans seem to have little to no interest in the alien corpses or their intent for such a voyage.

What I found the most frustrating about The Tomorrow War is that it not only continues the tired formula but actively pushes back against other aspects that could make it more than just a forgettable summer action movie.

Aspects of PTSD, questionable war efforts, global relations, and better understanding of your enemy are all brought up and then immediately tossed away because the film is more interested in having Chris Pratt run, scream, and shoot his way through aliens. If that’s all the film wanted to be, fine, but then why even bring up these other topics in a movie that is clearly not interested in exploring them?

It’s strange that for so long there has rarely been much questioning or satire of this tired sub-genre that is more present now more than ever. Takedowns of the common alien invasion story sadly seem to have faded over time.

One of the most notable is 1996’s Mars Attacks, Tim Burton’s love letter/roast to retro alien invasion pictures. Burton’s film finds itself more interested in the aliens who indeed want to kill everybody on the planet but more out of fun rather than some lust for conquest or food for their people.

The humans are posed as comical tropes of the sub-genre that are murdered, often in unceremonious ways. The military response to the aliens is ineffective and a bloodthirsty general is at one point told by the President of the United States to shut up already with constant nagging of wanting to kill kill kill.

One of the few films to be highly critical of the alien invasion story has been Starship Troopers.

Starship Troopers inverts the premise where humans are shown to be the invading force but keeps all the jingoism present in war pictures. Most war pictures attempt to paint the enemy as an other, somebody who wants you destroyed and you have to kill them first. Questions of why the enemy is attacking are not questions of interest for soldiers and rarely if ever considered.

Starship Troopers is satirical of both alien and war stories by pushing this brash, unquestioning nature to eleven. Rico and his many friends join up with the war effort to acquire their rights to citizenship but also take an absurd glee in their service. They live in a world where the only worth is in going into combat and defeating aliens, an activity that is treated less like a noble effort and more like a party.

Director Paul Verhoven, being highly critical of the novel source material, intentionally framed his film to be fascistic satire. The opening shots of the military lift directly from the Nazi propaganda of Triumph of the Will. Characters appear in formal military costumes that are unambiguous SS uniforms.

And the whole mantra of the film tries to play off the gruesome and horrifying deaths of soldiers in the field as just a part of the job you get used to. The very message of the society in the film stresses “Let’s all go to war and let’s all die”, mentioned explicitly in the final shots of the film where Rico leads a squad and shouts angrily, “Come on, you apes, you want to live forever?”

Further installments of Starship Troopers have sadly lost sight of this commentary and merely transformed into the very simple-minded sci-fi military films Verhoven was railing against.

The only other mainstream films that have shown alien invasions from a different perspective since have been films like Neill Blomkamp’s District 9 and Denis Villeneuve’s Arrival. District 9 treats the visiting aliens like refugees struggling to get off of Earth and Arrival poses the arriving aliens seeking to gift a form of communication. Outside of those films, mainstream alien invasion films are pretty much all the same breed of military action.

To make my point clear, I’m not saying that we shouldn’t have alien invasion movies that focus on military operations. But when the vast, vast majority of alien invasion films all follow the same rules and rarely divert into something more, the sub-genre becomes all the more tedious.

The Tomorrow War is one of the worst of these more recent films considering how much less it has to hide the formula.

There’s less hiding the fact that military service is the only way to defeat the aliens. There’s less questioning of the response to an alien invasion when public response is brought up and then quickly ignored.

There’s even less devotion to making these films more human by cranking up the melodrama and kneecapping the humor. How do you hire Chris Pratt for such a role as the wisecracking dad/scientist/soldier and he never lands a laugh?

Due to all of this, The Tomorrow War is just another entry in a long series of samey alien invasion movies, becoming far more transparent about the flaws they’ve always held and clearly not giving a fuck about it.

At least the aliens and the action look decent, I guess.

One thought on “Stupid Alien Wars”