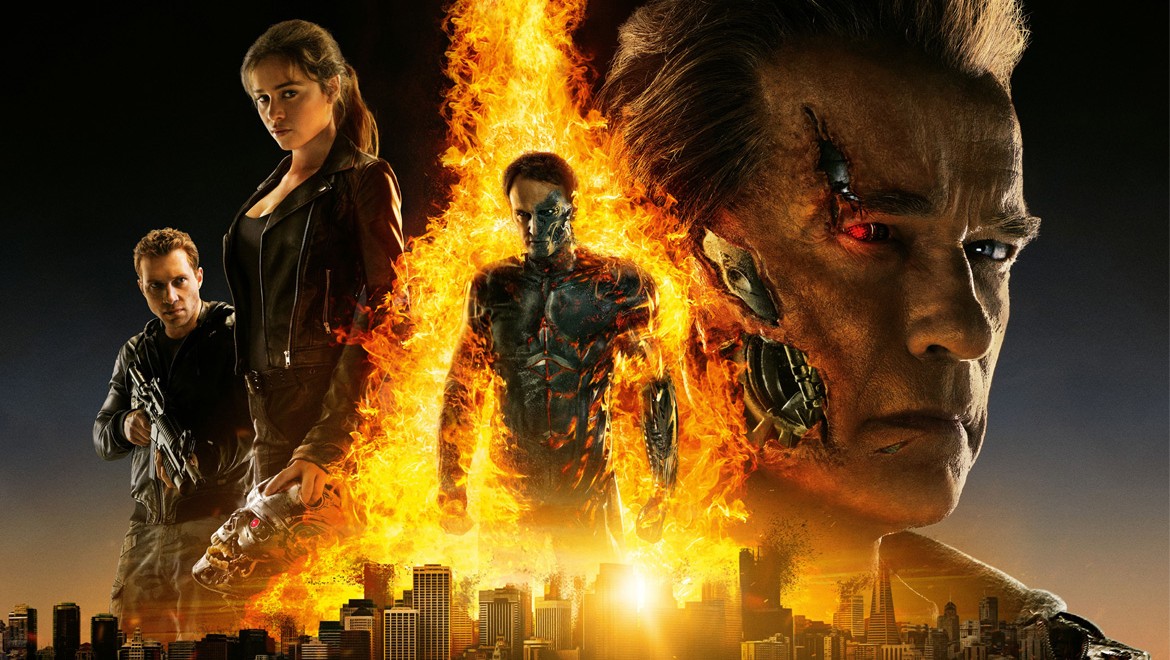 The Terminator franchise has reached a point of no return. After the thrilling neo-noir elements of the first film and the spectacular action bonanza of its sequel, the series has not progressed much since. It went for the typical summer vibe of including a sexy female Terminator for T3: Rise of the Machines and it tried to play with straight grit in Terminator Salvation. I’m not saying the PG-13 ratings of summer blockbusters hampered these films, but it sure didn’t help. And here we are back in the mode of Terminator acting more as campy summer fair with nostalgic banking. But there’s a bit of a twist this time in that Terminator: Genisys, the fifth movie in the franchise, takes a kamikaze approach.

All of the Terminator movies up to this point have been fairly faithful in sticking to the timeline of events as they unfold. This is not the case with Terminator: Genisys as it deliberately rips pages out of the original story and rewrites everything. It may be considered blasphemy towards the franchise and ludicrous for time-travel logic, but what more can we expect from Terminator at this point? Its story has been told in more ways than one. We know all about Skynet and the events that transpire before and after the rise of machines over man. It’s time to shake things up with a story we don’t entirely see coming a mile away.

The movie begins with the familiar scene of John Connor (Jason Clarke) preparing to send Kyle Reese (Jai Courtney) back in time to stop the machines. Even with the grand battle of humans versus robots in the opener, it’s all stuff we’ve seen before (and most likely better). But then something strange happens when John travels back to 1984. Some new sentient software dubbed Genysis and experiences new memories on his journey to the past attack John. When he arrives in 1984 to save Sarah Connor from the evil T-800 (younger Arnold Schwarzenegger), except the good T-800 (slightly younger Arnold Schwarzenegger) arrived early to help her. And the T-1000 shows up ahead of schedule as well. But, wait, there’s more! You also get more time travel where Connor and Reese travel into the modern present where they must stop Genysis in the form of a cloud application with the aged T-800 (present day Arnold Schwarzenegger). AND there’s a new Terminator that can heal faster and is allergic to magnets.

All of this sounds as though it were a Terminator fan-film come to life with its changing storyline, nostalgic callbacks and laughable means of making sense with time travel. The story is convoluted, the acting is not to scale and the action is comically overblown with flipping cars and explosions that are a hair short of matching an atomic bomb. And, yet, I didn’t mind this movie so much. Perhaps I am so enamored with Genysis‘ desire to trash the legacy of its lesser predecessors. If the Terminator movies want to continue being sequels or anything other than reboots, they can’t keep repeating themselves with the same old Skynet doom scenario. I could have done without the goofy franchise house cleaning to get to this new story of different evil robots, but this is the world we live in. You can’t completely do something new in a franchise without tossing in a few references or familiar characters.

Naturally, the biggest draw will be the action. Director Alan Taylor stages some big sequences of war-torn battlefields of the future, massive-sized research facilities for chase sequences and large enough buildings to demolish. There are car chases, gunfights, laser fights, Terminator fights and even a helicopter chase. From a technical standpoint, you can’t fault Genysis in the action department. Another surprising plus was the humor. While there are plenty of nostalgic nudges and winks that almost all fall flat, the more original and genuine comedy between Arnold, Emilia and Jai is actually rather amusing. If the character can’t be engaging on a dramatic level, there’s at least a twinge of cheesy amusement. The addition of J.K. Simmons as an eccentric conspiracy nut adds a little more levity to this doomsday plot.

Terminator Genysis is no ’84 Terminator or T2: Judgment Day, but why would it want to? Those movies were perfect and it’d be impossibly pointless to try to replicate them in the form of a reboot. I guess this is why I found Genysis more enjoyable than it should have been, as the divergence appears healthy. There’s a happy ending where crisis is averted and we don’t have to watch Schwarzenegger die yet again for the sake of humanity. That bit is as old as Schwarzenegger. This movie does its best to buff out the wrinkles of a franchise that is past its time. While it may not succeed entirely, it’s at least refreshing to watch the commitment to trying something new – even if it’s a mess of silly time travel and flawed characters.