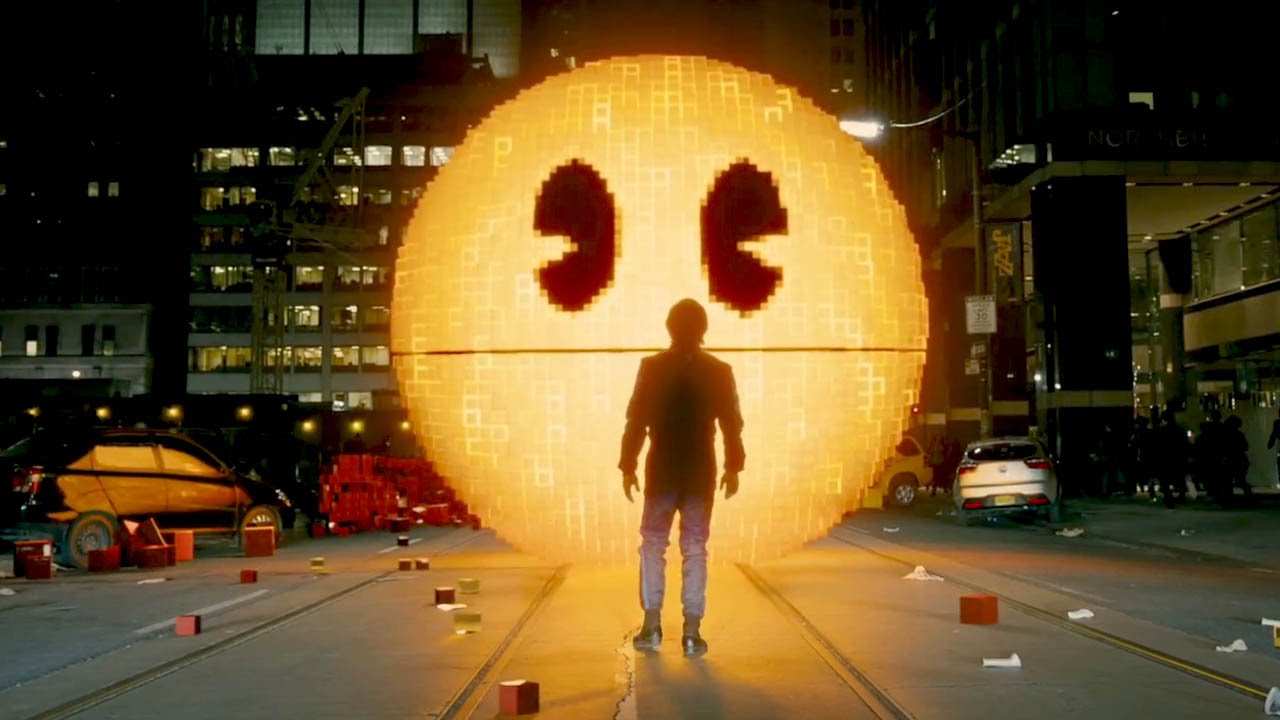 Pixels is a movie that used cheat codes to get to its own nostalgic special effects. It bypasses all the story, character and necessary logic to feature Adam Sandler and his friends battling video game characters in real life. It’s not important that there is any rhyme or reason to any of spec of this action comedy – all that matters is Adam Sandler’s passive commentary on video games and Josh Gad screaming at the top of his lungs. Sadly, there is no cheat code on the DVD to make any of this funny.

Nothing about this premise is all that original. The idea was based off a visual effect short of the same title and the story is ripped straight from an episode of Futurama. Slam them both together with the usual lazy writing of Happy Madison productions and you have one big mess of a movie about video game themed aliens invading Earth. The aliens – which we never see out of the form of licensed video game characters – declare war on Earth after viewing some of our video games from 1982. I never thought Pac Man or Galaga were declarations of war, but what do I know about aliens? I can tell you I don’t know much about these aliens considering how little of their intent is revealed.

To combat this threat, the United States decides to enlist the aged video game champions of 1982 comprised of Adam Sandler, Josh Gad and Peter Dinklage. Why are they recruited as opposed to all the other video game champions or alien experts of the past three decades? From what I can gather, Sandler is apparently able to recognize that the Galaga enemies were from the arcade version and not the home console version. Why is this important? It’s the script’s laughable excuse for using men in their 40’s for a video game themed movie. Could they have at least tried to make the scenario plausible and maybe abduct everybody on Earth born after 1982? It wouldn’t make much sense, but would be far more plausible.

Pixels banks entirely on nostalgia. Most of its comedy seems to derive from the mere sight of a CGI Pac Man devouring cars and Centipede ripping up buildings. Director Chris Columbus crowds the screen with so many of the visual gags, perhaps to cover up the script of lesser characters and dialogue. Sandler is portrayed as a tired and boring nerd that has been reduced to house calls for setting up electronics, but he’s still not above picking up chicks while on the jobs. A bad hygiene trait is forced on his character to enforce some sort of nerd stereotype. Peter Dinklage is an imprisoned champion of Donkey Kong, performing the worst accent of his entire career. Kevin James is the president of the United States and doesn’t have much to do until the third act. Josh Gad plays an alien conspiracy theorist who spends most the movie screaming.

I suppose the movie wants us to marvel at such unlikely heroes, but I’m more floored by such unlikable characters with nothing all that funny to do. Gad must instruct some soldiers on the mechanics of video games and makes a plethora of gay jokes while shouting at the men. He then spanks their butts while they are playing video games. There might have been a subplot to this humor about Gad’s character being a closeted homosexual, but such creativity is not in the cards. After all, Gad has a terrible romantic subplot about being in love with a female video game character. And if you can make any sense of that arc, I would love to hear about it.

I’m not much for video games, but even I was staring at this picture in astonishment for how much it got wrong. There are no cheat codes in Pac Man or Donkey Kong, but the scriptwriters believe every video game has a cheat code. Q-Bert pops up as an ally, but speaks in perfect English as opposed to the garbled babble he spoke in the video games. Even the title of the movie is wrong as the CG video games characters are assembled with voxels and not pixels. If the movie gets so many of these geeky facts wrong while focusing on a very geeky subject, the mind reels at just who this movie is intended for. It’s not for the geeks for its inaccuracy and it’s not for kids since they won’t get the references to Max Headroom or Hall and Oates. I can only fathom that it must be meant for baby boomers who played a lot of arcade games in the 1980’s and haven’t played one since. What an oddly specific demographic for such a terrible comedy.