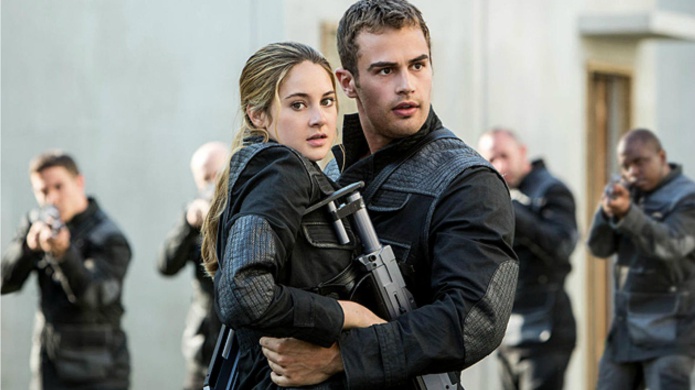 If you’re familiar with the current crop of young adult novels turned movie franchises, you may find yourself with a bit of Deja vu while watching Insurgent. Didn’t I just see this movie a few months ago, and wasn’t it called The Hunger Games: Mockingjay Part 1? They both feature scenes of running through the woods with gunfire following our fleeing characters. Wait a minute, that happened in The Maze Runner as well. These young adult heroes do so much running through the woods I’m surprised they all don’t run into each other at some point.

For as tired as I’m becoming of this formulaic subgenre, there was one aspect of Insurgent that brought me a small bit of relief. The movie sets up a society-changing MacGuffin that the corporate villains possess, but need our hero to activate it. It appears as too much of a game-changer that I was sure it would just be left on the shelf for the next movie. Thankfully, I was wrong. This story feels more complete in how it follows through on its premise by providing a beginning, middle and end to an event. After having seen so many of these young adult series that use their sequels as mere bridges of half-arcs to the final showdown, it was refreshing to watch a movie in a series that can stand on its own.

That is the good news. The bad news is that Insurgent can’t quite seem to shake those common young adult tropes. We find our hero Tris (Shailene Woodley) hiding out in the woods as the Divergent messiah in a world where roles are predestined. She bands together with the resistance that are doing their best to defend themselves from the evil Jeanine (Kate Winslet) of the evil Erudites. As Jeanine struggles to open a mysterious box that is said to be a solution to the problem with Divergents, Tris becomes a prime target as the key. Assaults are waged, hostages are taken and lives are threatened unless Tris turns herself in to open the box. Good of the people, fight the oppressors, all the jazz.

The story itself proceeds rather straightforward as you’d expect, but with some strong performances by Woodley, Winslet and, surprisingly, Jai Courtney. For being another messiah of a dystopian future, Woodley plays the role with more emotion than I’d expect in how she tearfully resists a truth serum and darkly accepts responsibility for being a big target. She even gets some great moments of action in between all the escaping and hiding. The action scenes are not too shabby either with some well-staged shootouts and a memorable battle of the psyche in a crumbling metropolis.

But while Insurgent does provide in these areas, it still forgets to give a reason to be invested in its story. The plot is still just as simple and lacking in depths as much as it predecessor. I wanted some drama and a reason to care about the acting and design which has been paid much more attention. I appreciate that the director pulled off some decent style and acting in what is an otherwise bland clone of the young adult genre. Whatever inspired him to more, please slide some of it by the screenwriters as well.

The Divergent Series has improved with Insurgent and just needs an extra kick to stand out from the young adult competition. That kick happens to be an engaging script with more believable drama. Despite some improvements in the acting and design, I just can’t bring myself to recommend the picture on those merits alone. There are much worse young adult movies out there, but Insurgent still finds its stuck in the same box – desperately clawing its way to get out its by-the-book structure. If you never saw the first movie or it just did nothing for you, there’s no reason to get back into the Divergent series with this sequel.