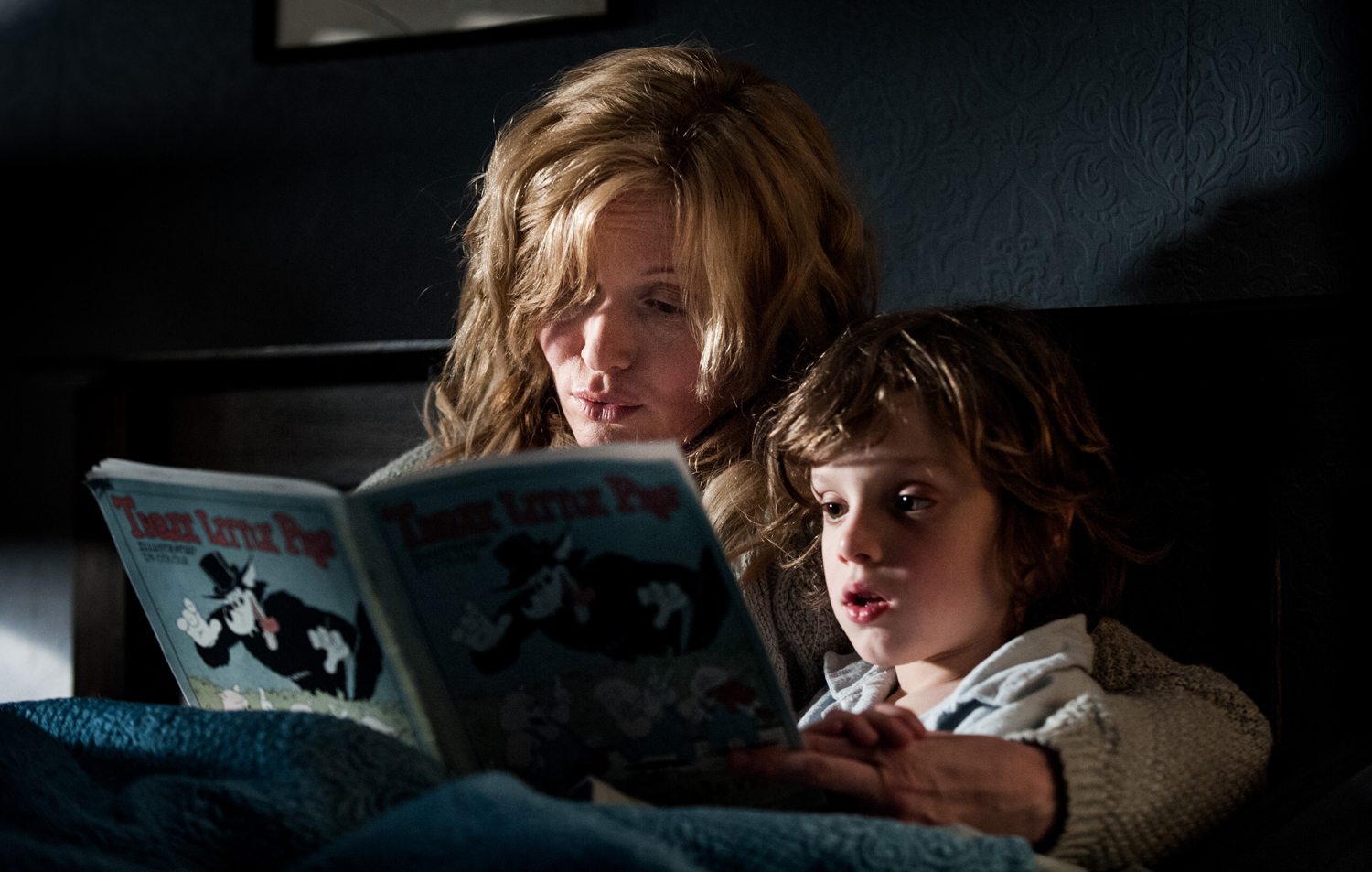 The real horror in The Babadook is that it doesn’t rely so heavily on its own boogieman. In doing so, it capitalizes on the one thing most horror movies seem to forget about: the characters. It’s not that the creep in the shadows that terrorizes this little family isn’t frightening (believe me, it is). But by turning this movie into more of a family drama about coping with grief, it becomes a far more personal story and less of a series of spooky boos and jump scares. Again, not that the scares are not terrifying (they really, REALLY are).

We see single mom Amelia, tired and worn, trying to raise her over-reactive and emotional son Sam. She has to check his closets for monsters, but still ends up with the frightened child in her bed. His fears, however, are more for his mother as he just doesn’t want to lose her the same way he lost his dad in a car crash before he was born. This is confirmed as the boy prepares for battle by assembling mobile catapults and homemade crossbows. He knows he is in a horror movie and is preparing for war.

But to his battered mother, she just sees it as more misbehavior. Unlike most films of this nature, however, we understand her rationale. We see her weary state from days of little sleep and constant work at an elderly care center. We see the frustration from her son’s constantly high-pitched whining and cries. We see her bitterness for an ill-equipped school to handle her son and her snippy friends who look down on her parenting. The last thing she needs is some invisible madman terrorizing her household.

The Babadook first enters into the household through the storybook Mister Babadook. Sam picks the odd book off the shelf for bedtime story. Amelia reads through the rhyming pop-up book with its black-and-white illustrations. The book grows increasingly frightening as it tells of the creepy Mister Babadook. He arrives with the sound of three knocks sounded out as baba dook-dook-dook. He lets himself into your soul and will make you wish you were dead.

After another night of nightmares, Amelia rips the book up and throws it away.
Not only does the book return to her doorstep the following day with the pages taped back together, but it now has new passages and pop-ups. The book claims that it will only get stronger and take hold of the mother. The last few pages are foreboding pop-ups of Amelia choking the family dog to death, stabbing her son and slitting her own throat. The Babadook is clearly going to use Amelia as a host for his violence, but it’s an easy vessel to inhabit. After all her complications with Sam, work, family and even social workers, it doesn’t take much to bring out the anger and fury of the woman who is fed up. Her murders could easily be dismissed as the woman who was pushed over the edge by a society that has failed her.

Amelia’s possession is seen as a fever dream for the overworked parent. Her quiet moments feel werey and passive between moments of intense bickering with her son. She starts to doze off while watching TV and starts seeing creepy visions of Mister Babadook on television as well as more premonitions about her being a murderer. As a parent, The Babadook plays on my worst fears: being the bad parent where stress overtakes your spirit. Amelia snaps viciously at Sam when he asks for something to eat, which Amelia coldly responds with “why don’t you eat sh*t.” Her hostilities grow progressively worse as she shouts and hollers at the boy causing him to wet his pants in fear (which she also blows up about).

The fresh writer/director Jennifer Kent has given commercial horror a run for its money with her sound characters and true sense of terror. Whereas other horror films struggle to make the audience jump, Kent aims to keep you in your seat and creep under your skin. This is what makes The Babadook such an effective horror picture – it stays with you long after the final frame making it much more memorable for the plot than the scares. But, again, the scares are super effective especially for the overworked parents tired of being used as two-dimensional puppets for these productions.