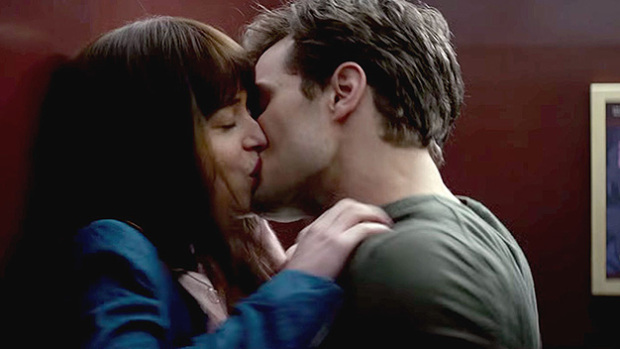 With all the controversy surrounding the sexual nature of Fifty Shades of Grey, I expected something either titillating, scandalous or laughably questionable. For a movie that features bondage and domination, I found myself surprisingly bored with the experience. Is this really what all the hub-bub was about? I’ve seen teen sex comedies and dopey romantic comedies that present copulation with more explicit content and more romance. If the original book was intended as trashy smut, then this movie adaptation certainly seems to fit that genre. However, it’s only risqué in a softcore sense the way it seems to be for older women who want to see something sexual, but not really sexual. A nipple hear and a butt there is plenty of titillation for that crowd.

Spawned as fan fiction from the tween-pleasing Twilight phenomenon, Fifty Shades of Grey entertains the scenario of a plucky college student being wined, dined and dominated by a rich boy. Ana (Dakota Johnson) has her whole life ahead of her as a college graduate, but decides to devote it towards pursuing one single man. Filling in for a friend, she interviews the wealthy industrialist Christian Grey (Jamie Dornan) and is drawn to his mysterious nature. There isn’t much of any charm to his quiet personality, but that doesn’t stop Ana from glowing around the good-looking hunk. Whether she’s lost in his eyes or his skyline views, she’s impressed enough to start pursuing a relationship with mister Grey.

What pertains to their relationship? Lots of paperwork, lots of sex and lots of dry field trips in Grey’s various crafts. There’s no meaningful dialogue between the two – just more mystique about being so shy and closed off from each other. Some of their first encounters involve Grey making Ana sign a NDA and later attempts to get her to sign a contract for sexual intimacy. Is this what makes for an erotic fantasy in this new age? Paperwork over dinner about negotiating whether or not to use butt plugs? Has the art of wooing a woman over charm become a lost art form? According to this movie, you can skip all that if you have enough looks and money.

So since we can’t really rely on the characters to develop a romance, all that the movie leaves us with is an abundance of sex scenes. Their sex is of the bondage variety which involves plenty of leather, ropes, crops, feathers, etc. Based on the display of Grey’s playroom, one might expect some displays of passion that are a little intense. But director Sam Taylor-Johnson softens all the sex to a ludicrous degree. There are no explicit moments of intimacy – only laughably edited shots of nudity with a soft rendition of a pop song playing over the lovemaking. These moments are as artificial and soulless as the relationship itself.

Fifty Shades of Grey is erotic junk food targeted at the women who want a smutty movie, but not too smutty. Rather than make something daring and telling of a relationship with a billionaire, the movie makes the raunchiest of teen sex comedies seem more heartfelt. There’s just nothing much to be felt by any of this – no arousal for its intimacy and no outrage over is subject. By the end of the picture, I was thoroughly bored with a mundane roller coaster relationship of Ana and Grey. And boredom is not something that should be attributed to a movie with bondage sex.