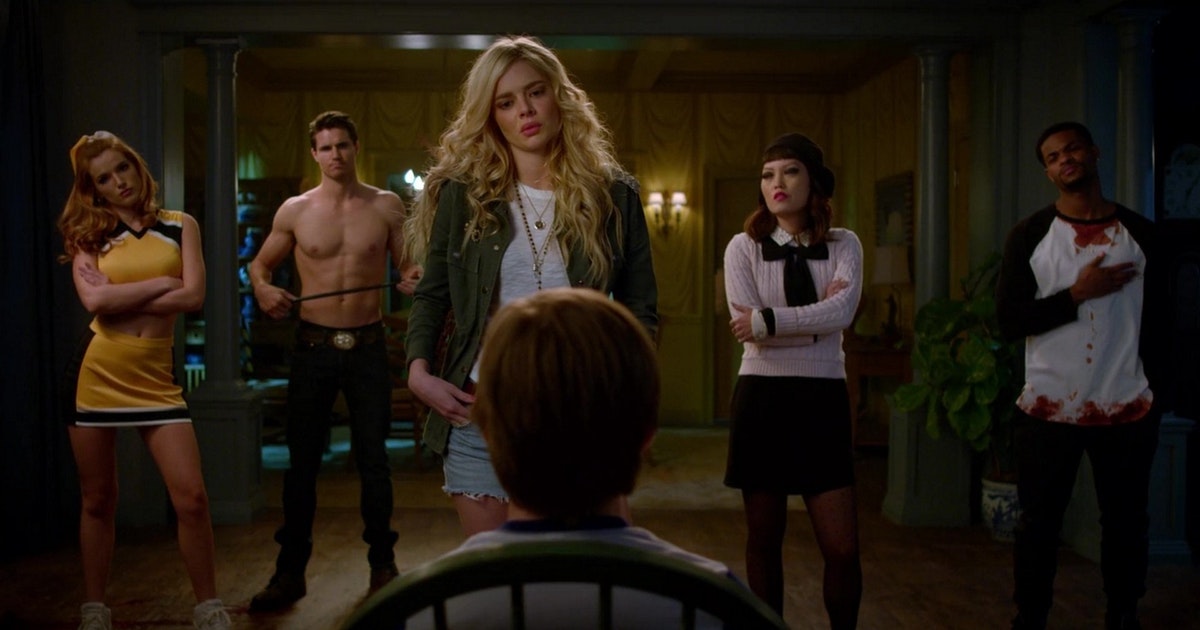 McG’s wild stab at a dark horror comedy continuously misses the mark, struggling to land a laugh like a lousy comedian flopping about a stage slippery with blood. Not only does it fail to garner a giggle, but also becomes embarrassing for how hip this script tries to be, slinging out geeky and topical talk like a grandpa drawing inspiration from a few threads he read online. This is almost like McG’s midlife crisis of a horror film, trying to prove that he’s still the fun director with his fingers on the pulse of today’s youth. His attempt comes off with more cringe than cool, akin to your dad dusting off his bellbottoms and throwing on some Ray Jay Johnson to impress your friends.

It doesn’t help that there’s a retro 1980s throwback in the direction, despite taking place in modern times. The story starts out promising with the plucky and bullied 12-year-old Cole (Judah Lewis). There’s a John Hughes vibe to his cartoonish journey to make it through the day of smart-mouthed doctors, insulting bullies and ignorant parents on the verge of divorce. There’s a girl he likes at school, but he hasn’t worked up the courage to ask her out yet. The only person he finds comfort in speaking with is his teenage babysitter Bee (Samara Weaving). When mom and dad are away for the night, Cole and Bee have a fantastic evening in with movies, food and playfully arguing about what movie characters would make the best away mission. Maybe things will be okay for Cole if he can confide in his babysitter.

But then the movie inexplicably turns dark. After going to bed, Cole peeps downstairs to spot his babysitter and her teenage friends killing somebody for a blood sacrifice. This is where the tone and style splinters into a mess bigger than the blood spray of the unlucky nerd that has his head stabbed. The teen characters are introduced with titles that look like something out of a 1970s grindhouse film. Their makeout session that turns to murder has the flavor of a 1980s slasher picture. Cole’s reaction to the killing comes with him mouthed on-screen text of “What. The. Fuck,” presented as a sharp reaction in an attempt to sound hip. If you think I’m reaching that point, consider the returning font when Cole picks up a pocket knife to defend himself with the on-screen text “Pocket Knife…Bitches!”

The teens hold this ceremony to achieve immortality and good fortune, but require Cole’s blood as well for the process to be complete. Bee goes easy on the kid by merely knocking him out and extracting just enough plasma with a needle while he sleeps. Once Bee and her teen cohorts discover that the boy knows about the murder and has already called the cops, Cole has to be killed. What follows is a version of Home Alone that amps up the darkness and cartoonish comedy to a staggering degree.

There could have been some fun to be had with the scenario, but McG’s timing is awful as he just doesn’t know when to end a joke. The film will stop dozens of times for Family Guy style bits where the characters will forget they’re trying to kill each other. A perfect example of this in the kitchen fight, where Cole is attacked by an attractive teen girl that wants revenge on him after being shot in one of her breasts. She believes her life has been ruined and that she’ll no longer be able to find a job. Cole assures her that there are lots of jobs where you don’t need boobs to impress. He discovers that she was only making the blood sacrifices to get a good job in journalism. Cole hopefully tells her that she doesn’t need to worship the devil to have such a career. And on and on this nothing dialogue continues until someone gets their head blown off at exactly the right beat and the chase continues.

The humor and tension evaporate faster the longer McG holds on these villains, getting to know them too well. There’s a jock in the group that is sympathetic towards Cole for being so scrappy and killing his friends in impressive ways. Not only does he put off killing Cole quickly to give him a “man’s death” for fighting so hard, but will even let him have a moment to stand up for a bully before delivering his execution. Even Bee, who seems to be most knowledgeable and focus of the group, also drops her killing of Cole for him spoiling Mad Men for her. And, in the film’s most tasteless moment, a cop points a gun at the black teen who genuinely pleads in terror “Black Lives Matters.”

The Babysitter has elements of a horror comedy that could work if you can fish them out of the randomness of the writing and gags that turn into elongated duds. One of the best bits features the black teen complaining that any blood splatter always hits him first and usually does in the film’s only hilarious running joke. But the film is so chaotic in its assembling of throwing every wild element at the screen that it ultimately waters down any glint of effective dark humor or brutal violence that could be had. It’s this inconsistency that makes the film’s seemingly exciting climax of Cole driving a car through the air and into a house feel surprisingly expected and confusing at the same time. I expected McG to add in something as crazy as that; I was still confused how it happened within the context of the story. And how funny can a horror movie be when you can see a head explosion coming so far in advance you could set your watch to the exact second of the explosion?