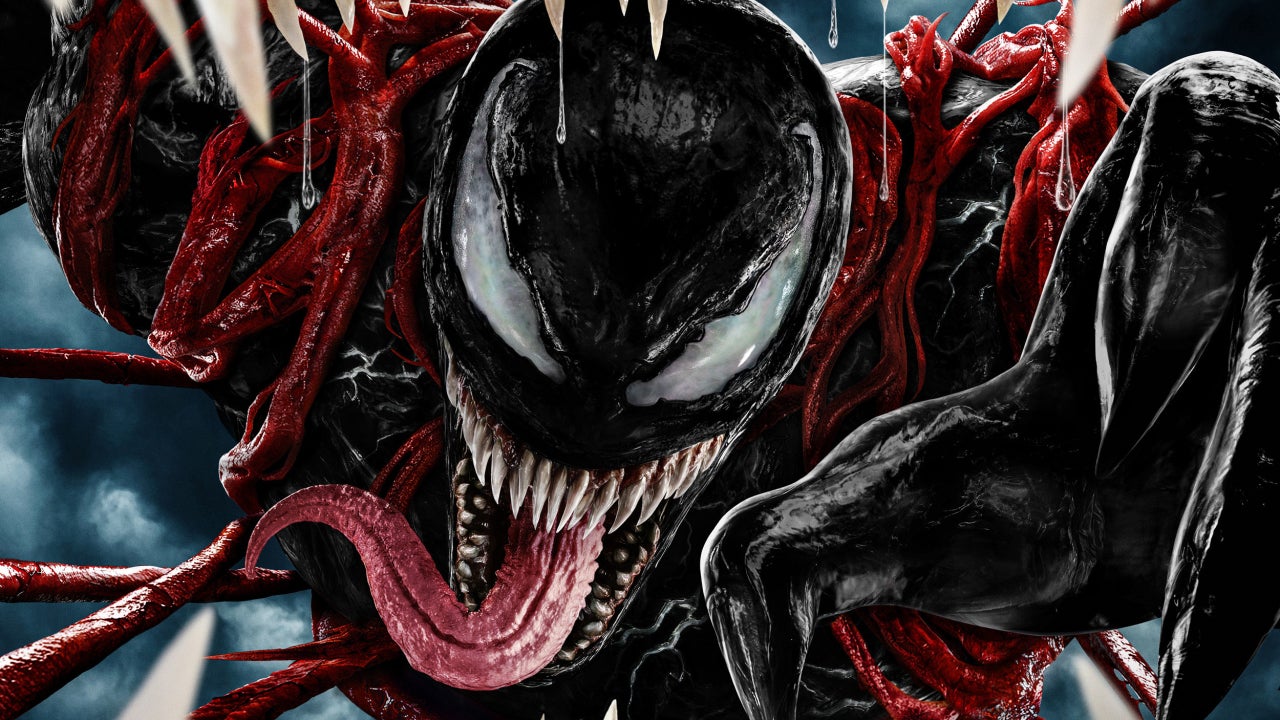 The buddy dynamic of Eddie and Venom was by far the highlight of 2018’s Venom. Nearly an hour exposition was a drag to sit through but little bursts of brilliance were here and there. It was more entertaining to watch Tom Hardy eat chicken out of the garbage and hop into a lobster tank than it was slogging through a standard mad scientist alien story. Let There Be Carnage is the sequel that is wise enough to know that this is the real meat of Venom and serves up a delicious comic book farce, trimmed of all that fat at a brisk 97 minutes.

The relationship between Eddie (Tom Hardy) and Venom has grown quite a bit since the previous film. They’ve learned to work together and set some ground rules. Eddie’s investigative journalism career continues to progress with Venom’s aid. Venom has agreed to cut human brains out of his diet so that Eddie can keep supplying him with chocolate and chickens. They’ve come to an agreement but haven’t really come to terms with loving each other.

They’ll need to come together if they hope to defeat Cletus (Woody Harrelson). At first, Cletus seems like a simplistic killer on death row. He had a troubled childhood and killed a lot of people. But when Eddie can’t control his temper around the prisoner, Cletus comes into contact with Venom’s goo.

With a little bit of the icky stuff, Cletus is able to transform into Carnage, a meaner and redder version of Venom. This symbiote seems to be a bit more powerful with its multiple arms and the ability to apparently generate tornados. Even with such a goopy presence, Carnage still manages to be a visible and discernable villain rather than just a smear of a villain. Credit to director Andy Serkis for knowing how to stage some strong visual effects shots.

The direction of Serkis also takes better advantage of the Eddie/Venom dynamic. Their couple nature is better embraced in this film as they’ve now had some time to get to know each other. Sure, Venom still despises Eddie’s incompetence, but there’s still a heart somewhere in that mess of black slime and teeth.

So when his ex-girlfriend Anne (Michelle Williams) is getting married, Venom tries to take care of Eddie. Even Anne, having grown used to Venom, urges the angry black blob to comfort Eddie in his time of heartbreak. Venom takes this opportunity to cheer up Eddie with a big breakfast cooked all by himself with his gross tentacles. What a pal, that parasite!

At one point, the bickering between Eddie and Venom gets so heated that Venom decides to split. Given that Venom isn’t one for somber goodbyes, he makes his break up an event by smashing up Eddie’s place, throwing his stuff out the window, and breaking his motorcycle. He then goes out on his own, attending a rave where he confesses how much he misses Eddie. Venom would predictably be happy that he can eat all the humans he wants but it’s just not the same without Eddie. Those two dopes really need each other.

At the heart of the film is a story about love. There’s a love between Eddie and Venom that needs to be addressed, where the two go through a bitter breakup and a very sincere return to each other. Cletus is bound by his love for the mutant Shriek (Naomie Harris), inspiring him to break out of prison and stand by the woman who was there for him in the worst of times. However, Cletus is doomed to destruction if he favors the parasitic relationship of Carnage in his body. There’s a whole other thing with Anne’s stuffy and nervous fiancee (Reid Scott) but that’s more or less just for audience surrogate reactions for those who are not quite comfortable with the likes of Venom.

The biggest surprise is that this sequel favors more of a romantic/buddy comedy aspect than it does the lukewarm monster mash of the previous entry. Sure, the action-filled climax is there and it actually looks quite stunning for taking place in a church. But the best moments are the many exchanges between Eddie and Venom, played with a mixture of comedy and sincerity. Honestly, the film could still work without Carnage at all, who exists more or less as the standard villain all Marvel films require. At least the ambitions of Carnage are simple enough that they don’t get in the way of the more powerful chemistry.

Let There Be Carnage is a love story and I know how crazy that sounds. It’s even crazier just how well it works as such. And, yes, the film can’t avoid the familiar tropes of the action climax or even the connected universe it spins. But as a film where Venom confesses his feelings for Eddie, it’s a beautifully absurd picture with an unexpected sweetness between its violent bouts of aliens munching flesh.