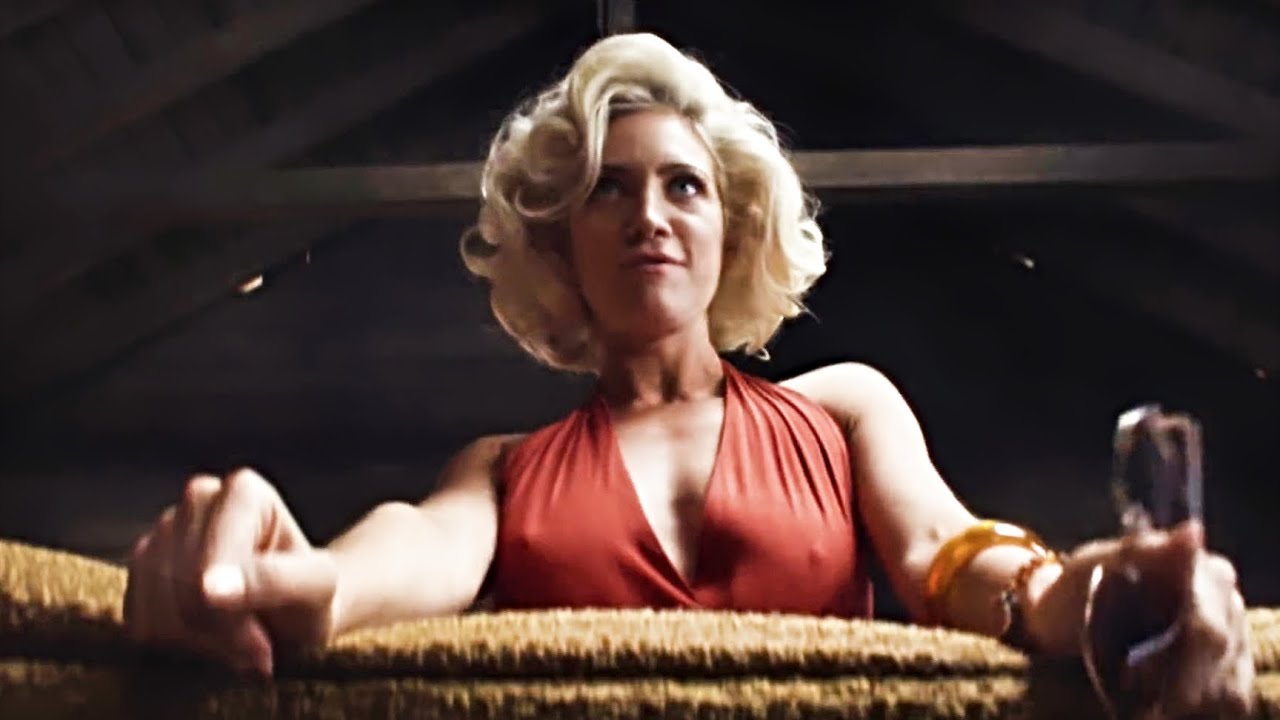 There’s a knowing enough tone in X to be both a love letter to the slasher genre and a meta-commentary on its components of sex and violence. There’s a sensation coursing throughout that life is short and it’s best to enjoy it while you can. There’s a certain catharsis that is touched upon in a picture that is peppered with all the hallmarks of the grotesque.

Of course, we know something horrible is about to go down. Even without the Sunset Boulevard opening showing the bloody aftermath, there’s that creeping sensation that this old couple has some darkness lurking under their creepy floorboards. The dark atmosphere and penchant for jump scare telegraph much of this that it doesn’t exactly become a major shocker when there’s a mutilated corpse found in the farm couple’s basement. I mean, sure, it’s shocking in the sense that the poor guy was strung up, slashed, and had his penis mutilated but somewhat expected.

What makes this movie far more intriguing is its focus on sex and violence as both a medium and tragic aspect of how time reshapes these aspects of our humanity. The script is also quite clever in how it easily weaves this contemplation into the script. Consider the scene where the porno’s sound girl Lorraine (Jenna Ortega) remarks that she wants to perform in a sex scene after hearing the actors talk about living in the moment. The film’s director, RJ (Owen Campbell), has a problem with this as Lorraine is his girlfriend.

The two engage in an argument about filmmaking, that it wouldn’t make sense to have a new sex scene and character after the script was finished and most of the film was already shot. Lorraine says it would be like RJ’s favorite film Psycho, where expectations are subverted. RJ, caught up in specifics, argues that they’re not making a horror movie. He also says that Psycho’s subversion was intentional while this move would seem more like pulling the rug out from under RJ’s auteur vision for pornography.

Aside from the meta-commentary about the actors not realizing they’re right in the middle of a horror movie, there’s also a sense of separation about how the human body is viewed. Wayne tries to tell RJ that there’s nothing he can do when she’s made up her mind and the porno’s central cast of Maxine (Mia Goth), Bobby-Lynne (Brittany Snow), and Jackson (Kid Cudi) try to stress that sex doesn’t always equal love. There’s also a spiritual component considering that the girl constantly referred to as “church mouse” finally takes off her cross when she’s ready to perform.

In one sense, the film is about people trying to find a release and some joy in life. Howard’s wife finds herself longing for the past when she was beautiful and desperately wants some sex to feel alive again. It’s something that Howard stresses he can’t give her at his age with his heart condition. She figures if she can’t get it from Howard, she might get it from the horny kids in the rented cabin across from their house. And if she can’t get it, then maybe she’ll just take it, where even driving a knife repeatedly into someone’s neck feels surreally satisfying to her.

Of course, all of this is an observation of the broader thematic elements. On its surface, this is still a darn good slasher with some quality kills. Throats are slashed, limbs are broken, eyes are stabbed, and there’s one particularly gruesome slaughter involving a gator that is perfectly teased and then pays off greatly. Even the porno they’re shooting feels believable for the era, embodying more of the retro eroticism than the corniness it could so easily evoke. That being said, there are some charming moments, as when RJ attempts to shoot Jackson in a way that looks like filling up his car is a sexual experience.

X is a fully-loaded slasher picture that is filled with just as much gritty gore and sexual allure as it does a greater theme of time and temptation. There’s just enough for the brain to munch on with its depictions of religious zealotry, youthful egos, and temptations of the flesh in addition to all of its gruesome money shots. It’s the type of picture that’s fun to watch the first time and even more intriguing to watch on the second. It makes the punchline from the mostly silent James Gaylyn as Sheriff Dentler all the more hilarious when asked just what happened at this bloody crime scene: “How the hell should I know?” I mean, we know, but sometimes it’s just fun to be blown away by the surprise and shock of it all.