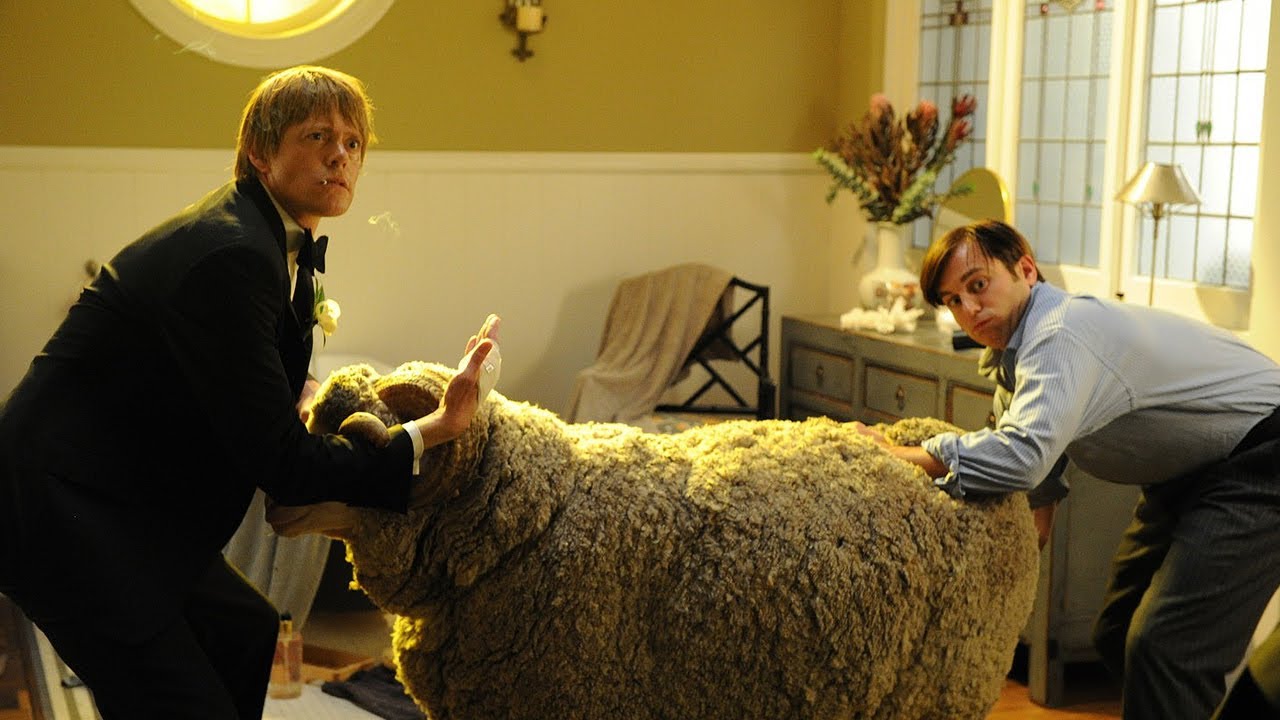 A Few Best Men is an Australian bachelor party film that features a ram on the poster. Based on bachelor party movie logic, we can expect one of the following to happen to the ram:

All four aspects are present in this film as it goes for broke with the animal comedy. Should we expect anything less from a bachelor party movie? Is it any surprise that drugs are involved in a wild night the groom and his men can’t remember? Are we supposed to be comedically creeped out by the expected off-beat drug dealer involved? And how much are we supposed to laugh at characters that exist more as joke robots than real characters?

One could blame The Hangover for this strange resurgence in the bachelor party film, but let’s not throw that film quite so far under the bus. There was at least some legitimate character and an intriguing mystery behind The Hangover’s cavalcade of gross-out humor and vulgar gags. That is what made the film so likable and it floors me that most filmmakers seem to entirely miss this point. With A Few Best Men, we’re not given real characters so much as we are given cartoon characters fashioned from the Hangover template.

We have our frustrated, straight-man groom freaking about his friends coming to Australia for his wedding. We have our pensive, awkward tagalong who ends up with all the bad luck right from the start when he makes a poor choice in mustache styles. We have our wild card who dabbles in drugs and danger with his funny lines. And there’s a fourth one who isn’t as memorable, merely existing as the fourth member so we can completely rip off the Wolf Pack from The Hangover.

You’d think having the wedding out in the rural countryside, away from the swaying vices of the big city, would be a safer location to have a bachelor party. But the foursome manage to find a way to have their bachelor party turn into a morning after disaster. They steal drugs from the local pusher of the area who has an unhealthy obsession with the pensive member of the group. They get the prized sheep of the father-in-law stoned and dressed in sexy apparel. And what bachelor party would be complete without the cliches of a gimp mask and a bare bottom with a foreign object lodged between the crack?

From there the story is just a predictable cavalcade of simple jokes for some witless blokes trying to repair the damage of their antics on a wedding day. Given that most of the film takes place on the day of the ceremony, you can expect lots of misunderstandings and slapstick where everything goes wrong with colliding forces. You can almost hear the collective sigh when a car forced into neutral makes its way toward a giant, spherical decoration which will inevitably roll down the aisle like a bowling ball. That’s a joke better suited for a Beethoven movie than some crazy bachelor party flick. The cast is decent, but they’re only doing the best job they can with a script that feels like half-thought jokes from one episode of a sitcom. Even the addition of Rebel Wilson to the cast can’t save the comedy this film is so desperate to reap. I can’t blame the film for relying on abusing the sheep at this point since a sheep in sexy clothing is at least mildly amusing. At least the film will gain some attention from PETA if nobody else.

A Few Best Men is too drunk on its own unoriginal ideas of bachelor party humor and needs to go home. It’s a bitter reminder of how much more stock needs to be taken in these productions. This is a comedy destined to fall by the wayside as the cheap, Australian version of The Hangover. I wish it could lift itself from that simple description, but it just doesn’t make much of an attempt to elevate itself out of that repetitive pit of the tired and dull.