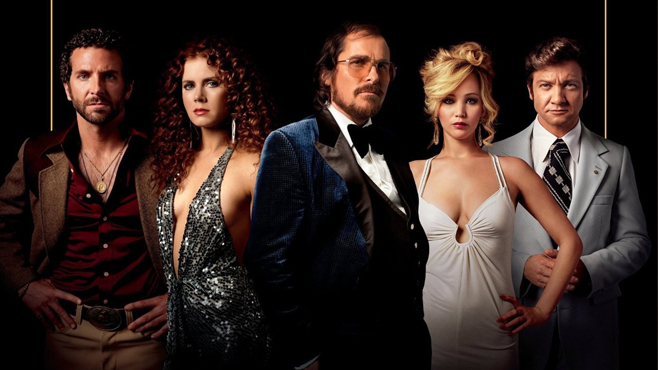 Director David O. Russel takes a con job tale and transforms it into a fast and stylish ride. He doesn’t gussy it up with lots of guns, gangsters and explosions, but keeps the plot moving so quickly with so many characters working on multiple levels. When it logically makes sense to take a dramatic approach, it goes for it. When there is a perfect moment for some comedy, Russel takes advantage of it. All of this feels organic and looks pretty darn sexy with the late-70’s backdrop.

Based on a true story, Irving Rosenfeld (Christian Bale) figures himself to be a mastermind con artist. He swindles many with various operations and his female partner Sydney (Amy Adams). They keep getting better and eventually fool around, despite Irving’s bitter wife (Jennifer Lawrence) and innocent son at home. Their scam operations are soon foiled by FBI agent Richie DiMaso (Bradley Cooper), but he’s willing to let them off the hook if they work undercover to scam and blow the lid off a corrupt congressman. Irving ends up using all of his smarts to pull off a successful scam when the odds keep raising with so many changing variables involving the FBI, the mob and even his wife.

‘American Hustle’ has an organic flow, but still moves at a breakneck pace. It knows exactly when to be emotional, when to be hysterical and when to be sexy without wasting a beat. There are so many levels at play in this script for all these characters to shine and there is an undeniable charm in how they set out to achieve their own goals. Every character feels real and smart, including Jennifer Lawrence’s character. At first she just appears as an obnoxious wife who smokes too much and blows up the microwave, but she’s smart enough to keep a grip on her husband until she finally discovers what truly makes her happy in life. Needless to say, the performances from this all-star cast is a joy to witness. Christian Bale proves that he can fill just about any role as he embodies Irving with a potbelly and comb over.

At over 2 hours, ‘American Hustle’ felt like it went by too quickly given the quickness of the script and direction. We get to spend a lot of time with these characters and witness only the important and juicy scenes of this operation. Everything is kept extremely tight with hardly a single scene that doesn’t garner a laugh, a cringe or leave you salivating for more. At times the movie moves so fast that if you blink you’ll miss the ending. This may be a deterrent for some, but I just couldn’t get enough of how director David O. Russel was able to keep things moving with a smart and sexy vibe. It’s most certainly a film I’m going to want to come back to if not for the layered performances than for the amount of details that zooms past the screen.