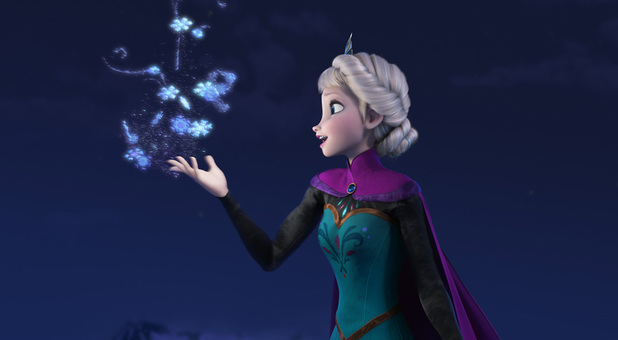 Disney’s latest animated musical certainly has a lot to offer. There are a lot of songs, plenty of characters and a story that’s more focused on sisterly love than finding prince charming. While ‘Frozen’ certainly does bring a lot of new elements to the table, it ends up like Chinese food; it tastes pretty good, but ultimately leaves you empty desiring more.

Anna spends her youth completely separated from her sister Elsa, hidden away in a room with her icy powers. When Elsa finally comes of age to inherit the throne, the two sisters finally connect for the first time in several years. But their reunion is cut short when Elsa accidentally exposes her dangerous powers and nearly injures her guests. Convinced she is a monster, Elsa retreats to nearby mountain where she assembles her ice fortress and casts a spell of eternal winter on the land. It’s up to Anna to save her sister and restore order with the help of the mountaineer Kristof, his trusty reindeer Sven and the comical snowman Olaf.

As Disney’s follow-up musical to ‘Tangled’ (from most of the same team no less), I couldn’t help but make comparisons. The songs, for example, are not as memorable and don’t have that same energy. For having twice as many musical numbers as ‘Tangled’, there wasn’t a single one that I found myself admiring. Some of them are still amusing as when Anna harps on life outside the castle and Olaf dreaming of being able to experience summer. Other songs just feel entirely out of place. The biggest song of the movie, “Let It Go”, feels somewhat misleading. Based on the tone and melody of that sequence, it seems as though Elsa finally embraced her powers with an upbeat outlook on her new sanctuary. It almost looked as if she were going to go into full-on villain mode which would’ve made the film a lot more interesting. Instead, she reverts back to being sad and ashamed when we next see her. Either “Let It Go” was a poor choice of music or Elsa has strange mood swings.

While the music and tone may not be impressive, the animation manages to pick up the slack. There are some gorgeous sequences involving lots of snow and perfectly timed slapstick. Most of the humor is in the department of Olaf, a character who I wasn’t fond of at first but soon warmed up to. Being a snowman, there are so many possibilities with removing body parts and reassembling himself with the abundant white resource. I ended up liking Olaf so much I almost wanted the story to be entirely about him. The other characters have some hilarious lines and physical gags as well, but they hardly compare. For instance, the reindeer Sven gets in some great expressions and poses, but all I could think of was the horse from ‘Tangled’. We’ve seen this same character with the same bit before. Give us something more than just a carbon copy, Disney.

I’ll give ‘Frozen’ some credit for taking a few risks and trying out some new material as it leads up to the happy ending we all see coming. But as far as Disney animated musicals go, this one was lukewarm. It attempts to juggle many characters with a plot that may be too intricate for its own good. There is still some detailed animation and exceptional gags, but I’ve come to expect most of this from Disney anyway. If they ever hope to top their surprise hit ‘Tangled’, they’re going to have to serve up something warmer than ‘Frozen’.