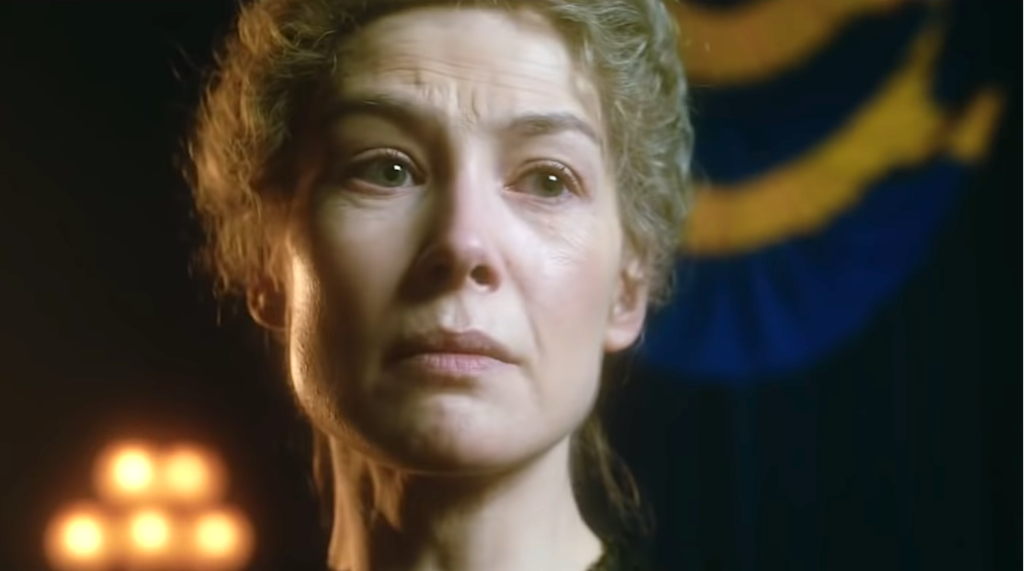 There’s a fascination with the Curie’s and their discovery of radioactivity that seems to favor more of the influence than the people. Marie Curie is given the spotlight here, but the focus is so clearly on her work and drive more than herself as a person. Her tragic marriage and involvement in the war alongside her daughter make her interesting portrait, but as with the work of Curie herself, this is a picture far too lost in its grander picture than to care enough to blow up the smaller one.

Marie is at least portrayed with so enthused vigor from the accomplished Rosamund Pike. She’s anxious to delve into the unknown with her exploration of science, despite a society that doesn’t favor her work or allow for proper equipment. Then she meets the Pierre Curie (Sam Riley) and they hit it off over their talk of science. Marie appears reluctant at first, striving more to prove herself on her own without extra assistance. Of course, she’ll take the Curie name in marriage as the two soon fall for each other, and then new doors literally open up for them when they acquire a new lab.

The film takes a very unorthodox and non-linear route in portraying Marie’s life. The film begins with her collapsing to the floor in her old age, clearly on her last legs of life. We then flashback to her beginnings as a scientist and her rise to fame, including a product showcase of how popular the term radioactive became in her Paris community. But then things take a stranger turn when the film cuts away to future uses of her discovery. We look upon the medical aspects, where a young boy with a tumor receives a dose of radiation to improve his odds at life. We watch in horror as the atomic bomb descends on Japan and obliterates the populace. We watch in defeated dismay as the 1986 Chernobyl meltdown results in the tragic loss of life.

These scenes outside of Marie’s life seem to coordinate with the concerns of herself and Pierre, but it just gives off the air that the film is less interested in the Curies to take such off-course routes. These scenes constantly took me out of the movie to remind me about all they’ve accomplished. By the time the film gets around to the climax of Marie witnessing all the history of her work in a literal stroll through time, it’s hard to be won over by the spectacle and more baffled at the suggestion that Marie somehow had premonitions on her deathbed. It’s a shame that Pike’s powerful performance is relegated to set-pieces that dwarf her while her quieter moments are only handed stock inspirational moments. Though I have to admit she sells them rather well.

I don’t want to take the film too literally to this degree, but even when the film sticks within its own timeline, the film takes some odd routes. Marie and Pierre partake in a vivid light show of hucksters that acts as an odd bit of surreal transition to showcase the mental anguish of when Marie loses her husband. After enduring half a film that seems to take a somewhat subtle route to its science allure, there’s a neon tinge of the otherworldly that merely sticks out as an off-tone take on coming to terms with death. But the more I think of it, the whole film has the sci-fi tint to it the way the soundtrack gets all synthy when dabbling in a montage of science, the way Marie toils endlessly over crushing ore and boiling it down.

Health concerns come up in more of a visual way, but it feels as though there’s yet another story to tell here if the film already feels like jumping around in time. Why not observe more of the widespread health concerns with radiation? Too ambitious perhaps? Possibly, but I doubt there’s little limit when a film wants to connect Pierre’s concerns about the future, intercut with the dropping of an atomic bomb. We’re not so much seeing people on the screen as we are ideas and innovations that transcend time and characters as well.

Radioactive has its heart in the right place but perhaps skips a few too many beats to ever be a healthy biopic. Calling the film scattershot would be an understatement, though it never quite digs deep enough to hit Terrance Malick levels of introspection and contemplation. Maybe if the film boiled in some more skips around time and wild visuals it could find something more allure rather than dabbling in a little bit of Marie’s personal life and a little bit of existential questioning. The two tones do not a fine mixture make.

One thought on ““Radioactive” Review”