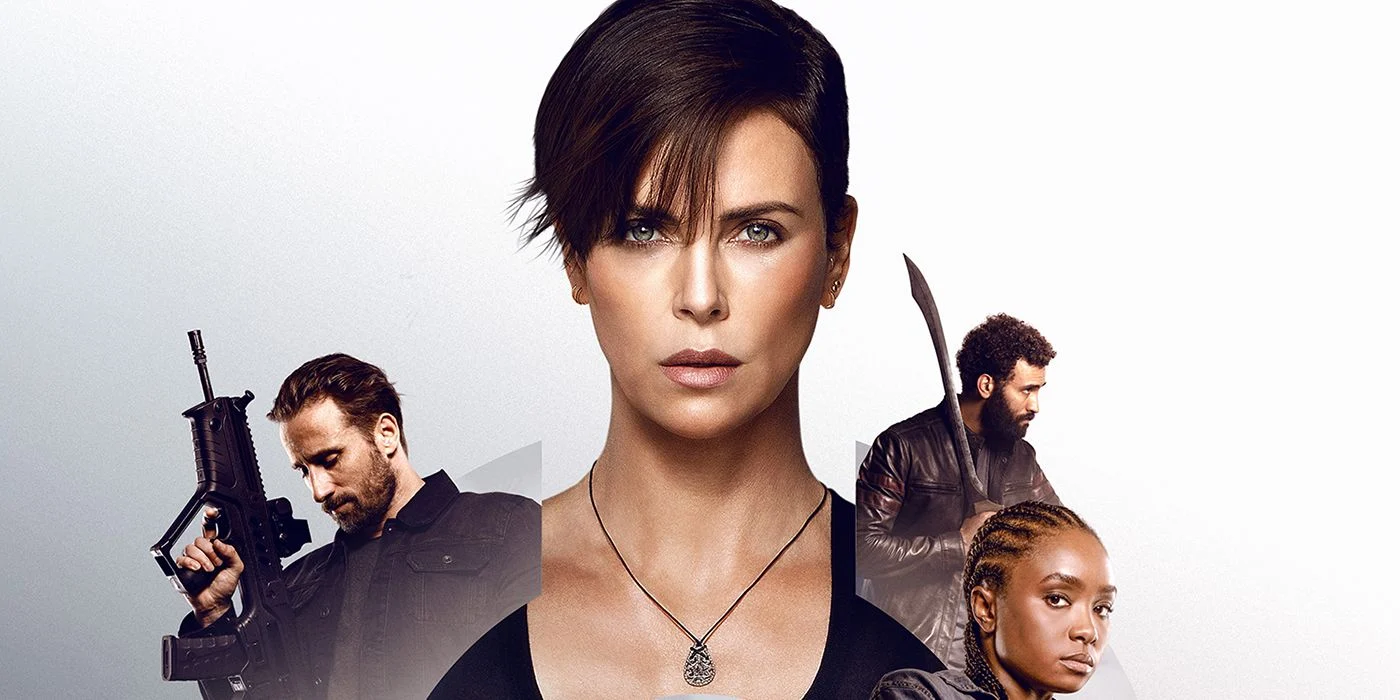 Greg Rucka resides over the screenplay adaptation of his comic book The Old Guard which breaths with an air more akin to snugly fitting a mainstream action picture. Though its ambition perhaps aims a little bolder and its themes of persecution much louder than the flock, I can’t help but feels there far more for an epic of this scale. For an intriguing premise of immortal beings traversing centuries seeking meaning amid the chaotic landscape of man, this film merely scuffs the surface of its full potential, feeling more like issue #0 on Free Comic Book Day than the meat of a unique superhero story.

Consider how the immortals are introduced as mercenaries for hire. We catch up with an ensemble of four in the present day, engaged in thrilling albeit familiar tasks of rescue missions. Their immortality is impressive in that they are more regenerative than invulnerable. They can survive taking a few bullets to the face, but will have to spend a few minutes pushing those bullets out. There’s an urgency given to their lives in that their reanimation is not forever. In the same way the functions of mortal bodies collapse with age, so too does the immortality, where the next slit throat or shotgun blast to the chest could be their last.

The screenplay wisely doles out this information over the course of the picture, showing more than telling, though it loves to get all flashback-y when it tells. Charlize Theron narrates most of this story as Andy, the oldest of the immortals, referring to her age only as “old.” Her journey is more of an ethical one, struggling to find some use for her group and their powers. Forming some X-Men style group of do-gooders sounds the most logical, but Theron finds this task a tougher ordeal when their band is so small and the world’s problems are so massive. Sure, they could walk into a terrorist situation and survive the assault, but in the amount of time it would take for them to get back to their feet, a few hostages could be picked off.

It’s unfortunate that the film settles on an all-too-familiar staging of the dangerous scientist and the plucky newcomer. Theron’s group is targeted by the CIA working in conjunction with an English medicine company seeking to capture and dissect the immortal to find a cure for the world’s more incurable diseases. A noble effort, perhaps, but the CEO (Harry Melling) seeking this tech is staged in the most cartoonish for evil business types that there’s little questioning in his ethical principals to be considered an ally. At the same time, the immortals discover a fifth addition that has recently joined their ranks, coming to the attention of US Marine Nile Freeman (KiKi Layne) in the Middle East. After discovering this ability on a botched mission, the immortals take her in and give her the rundown on their powers, as well as trying too hard to keep her safe so that she may prove herself in the climactic showdown atop a skyscraper.

Much like the story, The Old Guard has some impressive action that blows its load far too soon to make the build exhilarating. The clear highlight occurs during the end of the first act where Theron and Layne have a knockdown fight within an aircraft carrier in an ouch-worthy sequence. It’s intense bout of close-quarters combat that is expertly shot and uses the location well. By the time the film finds its way to the CEO’s penthouse, it’s a rather predictable skirmish of bullets and bruises, even with the added twist of one of the immortal being on the last of their reanimations.

With exposition most pronounced, much of the writing suffers for trying to construct rather simplistic characters with a whole lot of nothing to say and few scenes to make them shine. Theron is a badass, for sure, but she serves little more than a more open and charismatic Wolverine in how she details the tragedy of losing love across the ages. The rest of the immortals fulfill basic personalities of the aged exposition backup when Theron doesn’t feel like talking and a same-sex couple with a racial divide that is woefully underdeveloped for all the romantic tension it could reap. Props for the inclusion but when their love has to be more told than shown, there’s a disappointment when their first big kiss occurs after one declares to their enemies that they’re not just boyfriends but so much more in an elongated speech about enduring romance. Even the tracking CIA agent (Chiwetel Ejiofor) with a conspiratorial bent and a personal gain in this mission feels more par for the course.

The Old Guard takes on a lot of physicalities and special effects to provide backup to a middle-of-the-road comic book movie. It’s serviceable enough to distinguish itself from a myriad of mediocre Universal Soldier clones, but only due to a competent cast, a compelling premise, and fights flowing with energy and grit. Whereas the likes of X-Men found a thematic grounding in the areas of racism and reform, Rucka’s graphic novel is in the same boat as its characters: Struggling to find something to with such powers. Here is a film that gets its action-ready cast all dolled up in the immortal digs and finds little more than a handful of bruised-arm battles to shove them towards, watering down an otherwise engaging idea.

One thought on ““The Old Guard” Review”